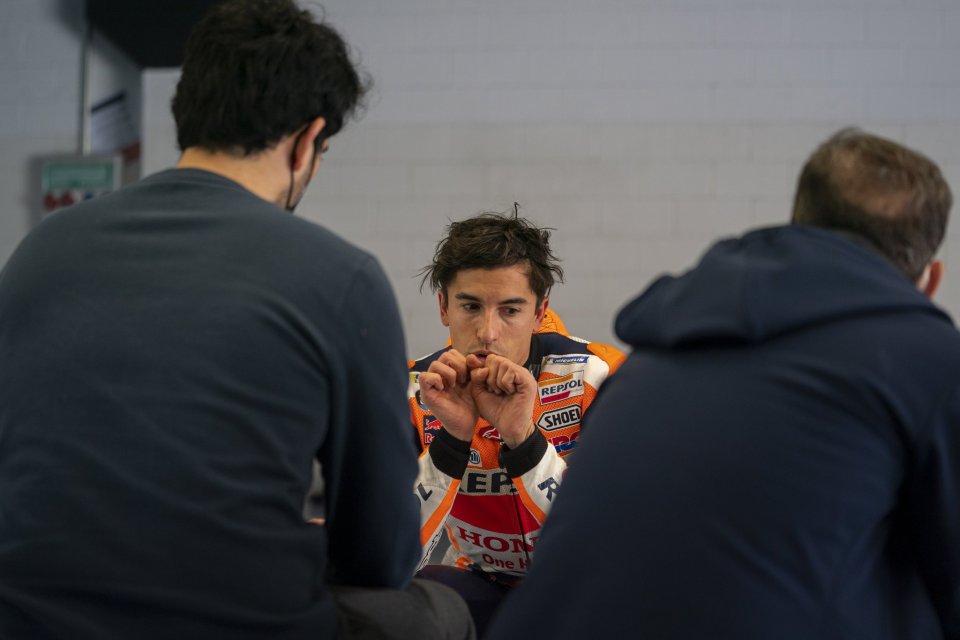 Marc Marquez had started to race for the podium and ended up falling at the first lap, after a few corners, after having involved Jorge Martin in a risky attempt to overtake. This was the third fall of the weekend for the eight-time world champion. Is there any resemblance between these falls? Something common that could have originated them?

“No. The situation with Bastianini was obviously completely different. He was in the middle of the track. Many times, you don’t realize how quickly things happen in the MotoGP,” Marc explained. “As for the race, I apologized to Martin. It was totally my fault. I was too optimistic. Martin went wide. I didn’t have time to change into second and then third. I miscalculated. I also apologized to Pramac. I was too optimistic. That’s racing. I made a mistake today.”

How did Jorge take your apology?

“The first thing I did is I went to Hospitality, because he was eating. I feel bad, because we had the pace to fight for the podium. It’s true that we were out of line, and neither he nor I were well positioned. I’m sorry I ruined his race. Jorge accepted my apologies. It’s psychologically hard when you make these mistakes, especially if you involve others.”

Three falls is a lot. You’re obviously not riding as usual.

“No, I’m not riding like I used to. In the FP1, it was a big fall, but it was caused by a cold tire. In the second, I was slow. I had a sudden vibration that caught me off guard. Then I made a mistake on the first lap. I had already touched Martin at turn seven. I didn’t calculate well. I was too optimistic. In the first round, you have to be very careful. This year is tough both physically and psychologically. but we have to insist because, as I improve, I’ll be fast again, and things will change.”

“I see the reality of the moment I’m living. My intention was to overtake. Something had to happen that didn’t. I was already badly positioned from turn seven. I was wrong, and when you’re wrong, you have to take all the criticism you get.”

What is it that bothers you the most?

“It makes me angry to have ruined another rider’s race. And then it was a good race to fight for the podium. The good thing is that I was fast, which gives me the motivation to keep fighting. I have to keep working. That’s the reality of it.”

Quartararo won by dominating. It’s his fifth success. Is the world championship over?

“You can never say that the world championship is over, but Fabio is the fastest on the track, and also in Austria, where he had problems, he defended himself. I already said it long ago that I was betting on him, and I repeat it. He pushes for four or five laps and then controls the race.”