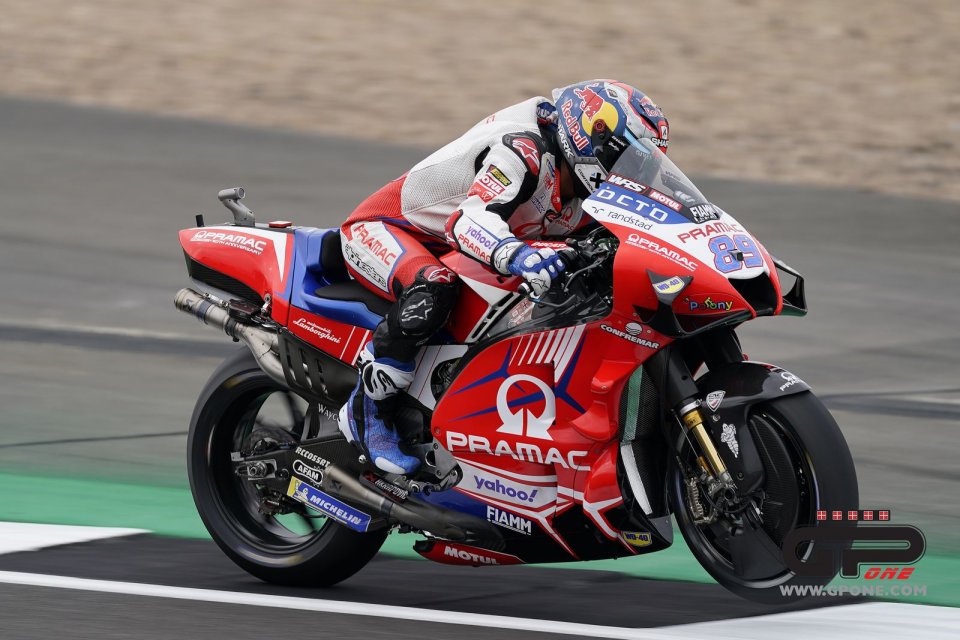 First disbelief for an awesome qualifying time, then the creeping awareness that 1.58.008 was the result of cutting the corner. Despite everything, Jorge Martin continues to convince everyone with excellent performances and even this fourth place obtained in qualifying is proof of a positive moment for the Spanish rookie who is certainly aiming for something more in tomorrow's race.

"I cut the corner because I wanted to get into a good position, in front of me I saw Márquez and I thought that putting myself behind him might be the best position for the final lap," said Martin. “I immediately understood that I had not set the pole, but I didn't know in which position I had finished. To finish fourth is a good result, I think the pace is good and that we can fight for the podium tomorrow. In FP4 I put on tires that had a lot of laps and so being behind in the standings is normal, in any case I showed the pace I have. To be honest, almost everyone put on new tires. I'm confident for tomorrow, I feel great with the new tire”.

We saw you laughing and joking with the other riders, what did you say to each other at the Parc Fermé?

“Yes, I had fun in the parc fermé, as soon as I arrived, I said that the pole wasn't mine and that we had to see the lap again. I wanted to go back to the pits, but they stopped me because I was the best independent rider. I talked to Fabio and Pecco and they laughed and told me that it was not possible to do such a fast lap. In any case, I'm close to them, a tenth away, I think we're in good shape ”.

After the win in Styria you said you felt tired towards the end of the race due to your injuries at the beginning of the season, where are you with your physical condition? Do you feel 100% considering this is a very physically demanding track?

"I felt 100% before the weekend, now I'm struggling a bit, like at Assen. I'm a bit scared, because there I had to retire due to a tendonitis in my biceps and I still feel the same thing. For sure things are going better, but I'll have to work for tomorrow because the race is long and I hope it won't cause me any problems. I lack a bit of strength and I have to compensate with other muscles ".

In Qatar and at the Red Bull Ring, two different tracks from this one, you were fast: do you have more fun riding on a track like Spielberg or on a circuit like Silverstone?

“I think this is nicer, there are more corners, it's fast and you can make the most of the power, but I think I enjoyed it more in Austria because I was faster. But I'm also having fun here because I'm in the top 4-5 positions. Let's say that in the end you enjoy it based on your position in the standings ".

Qatar and Spielberg were tracks you were aiming for because you thought you could be fast, but you are also fast here at Silverstone: do you think it is the result of an improvement you have made or is this your real level?

“At Sachsenring I started seventh but I could fight for the front row, I was very fast in Assen but I had some problems in FP3. I've almost always been fast; I'm getting used to the bike and I feel pretty competitive. I think I just need a little experience for the final race and for this aspect I am working in FP4 with used tires, to try to understand how the electronics work. Actually, I'm usually fast at Silverstone too, I have been in the past, I hope I can be competitive on other tracks as well, it would be important for me. Anyway, coming here to Silverstone, after the races in Austria, and being fast is positive ”.

You said you talked to the other riders in parc fermé, but what did the team tell you because they were incredulous for a few minutes and how do you see tomorrow's fight for victory?

"We had a laugh, in the end I'm fourth and it's a good position, they were quite impressed. It was logical, I had a second advantage and it was a bit unreal as a result. For me, however, it was very clear, I didn't celebrate because I knew something was wrong. For the win I see Fabio very strong but it is difficult to say because in FP4 they all lapped with new tires. I'm competitive on the flying lap and I don't feel bad with used tires, but I can't fight for the win. There is Fabio, then I see Pecco, Aleix, Márquez, Miller, we will fight for the podium. Pol will start first but seeing the pace I think he will suffer in the final part”.

Understanding FP4 is difficult every time, Miller explained to us how the Ducati treats the tires. He tried the hard one and he discarded it because the first lap with that is like being on ice. I guess you won't use it either: the medium tire Jack says you need to use without forcing the pace, are you okay for tomorrow?

Márquez said he saw you very fast in Austria but that he would have liked to see you on another circuit like Silverstone to get some confirmation and to see if you can be a candidate for the title in 2022. Are you improving steadily?

"I think so. Today Marc tried to get behind me at the start of practice, I think it was a sign. But you have to ask him how he saw me today, after getting behind me he thanked me with a nod. I have no problems, I don't need to get behind someone else, today I wanted to follow someone to try to fight for pole, but even when I go alone, I am capable of setting excellent times. After Austria we all had doubts and we wanted to see how it would go here, it's a different track, there are no difficult braking sections but I'm always in the top 4-5 and it's very positive for me, more than getting another pole. I see from time to time and for now everything is going well ”.

Quartararo admits he was always at the limit: “There will be no room to be on...