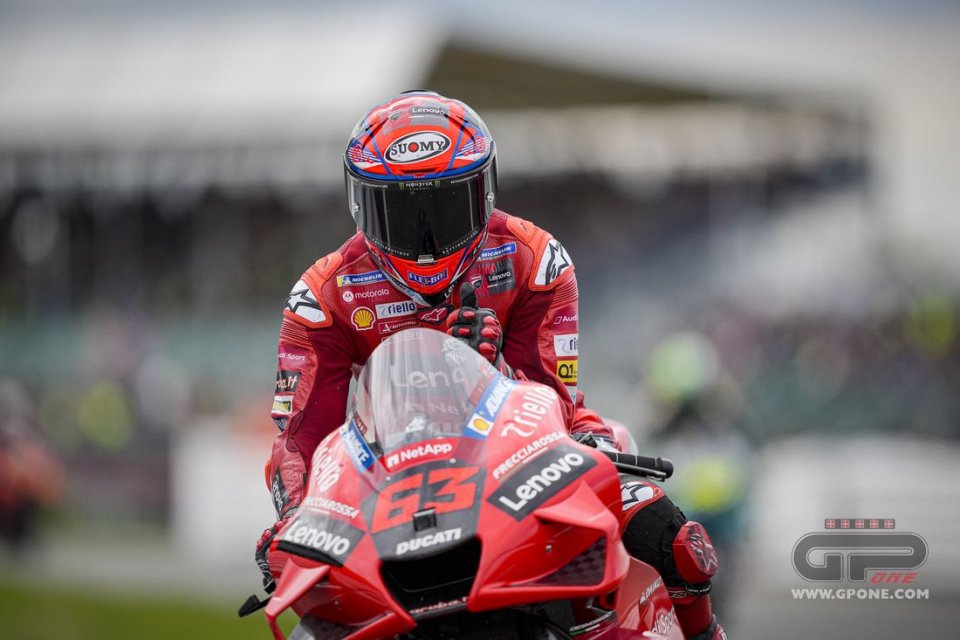 It won’t be an easy task, but tomorrow Bagnaia might perhaps be able to fight against Quartararo. He will start in front of him on the front row and mustn’t let him get away, because the Frenchman has shown that he has an impressive pace at Silverstone. However, Pecco and Ducati also defended themselves well on a track that had never been particularly favourable for the red bikes in the past.

“I am very happy because we worked very well, making a step forward in each session and I had a lot of confidence in FP4. The only moment in which I felt a bit disappointed today is when in qualifying I saw that Martin had lapped in 1'’58.0, then I realized that it was an impossible time - joked the Italian - This is a track that I like very much but I struggled with the Ducati in the past, while now I'm competitive and I think I can have a good race ”.

The Desmosedici has definitely improved in the last two years, but the same can also be said of Bagnaia…

"As for the bike, we made a huge step forward with the chassis - he explained - In 2019 it was hard to move it from one corner to another, while now it is much nicer to ride, it closes the lines. As for me, I think what has changed is the fact that I am now in the factory team. It helps me to be more motivated”.

There is also another technical aspect, linked to the tires.

“I feel better with the new casing introduced last year for the rear tire - he continued - I also understood how to better manage the braking when entering corners, because in my debut year I often crashed there. Having more experience counts, you take fewer risks and also the work with my trainer and the Academy has allowed me to be more prepared to stay at the front. "

While Bagnaia is satisfied with his day, the same cannot be said for Jack Miller. The Australian was fastest in the morning, but he will start from the third row tomorrow, with the 7th fastest time.

“I am not particularly happy with today's qualifying result - he admitted - After setting a great time this morning in FP3, obviously I was hoping for something more this afternoon, but unfortunately in Q2 I didn't feel completely comfortable with the new tires. Tomorrow in the race we will have to try to attack right away to try to recover positions and not let Quartararo get away in the first few laps. Even though we are starting from the third row, I don't think it will be difficult to do: in general, my feeling with the Desmosedici GP on this track is excellent, so I will try to give my best tomorrow in the race ".