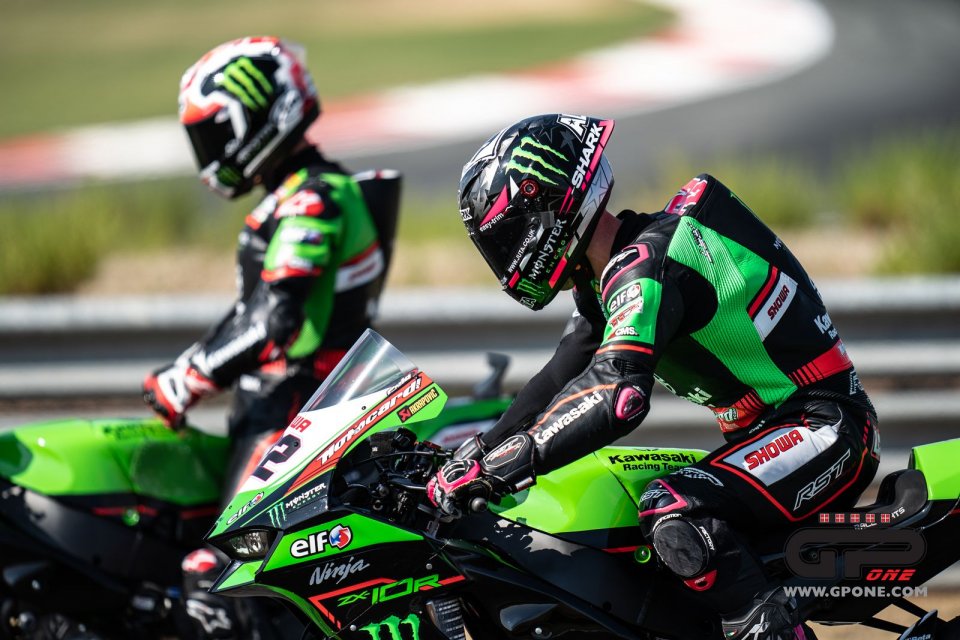 Kawasaki Racing Team, is about to undergo a single day test at Portimao in Portugal on Friday 27 August with their regular riding line-up of Jonathan Rea and Alex Lowes.

This test at the undulating 4.592km long Autodromo Internacional do Algarve is in some ways a ‘carry-over’ of a planned two day test they took part in during the 2021 pre-season, which was affected by some adverse weather conditions.

After passing through the halfway point of the 2021 WorldSBK season at the most recent round in Spain this Portuguese test will be particularly useful for both riders and technical staff. They will have a chance to evaluate performance in hot summer conditions with the season-long specification of the 2021 Ninja ZX-10RR WorldSBK race bike.

Rea enters the Portimao test tied on points with Toprak Razgatlioglu at the head of the championship table, and with 19 podiums and eight race wins already achieved over the first seven rounds of the season.

It should help Rea’s cause in testing that he has such an affinity with the intense Portimao layout. Until he won a triple of races at Assen in June this year Portimao had been his most successful WorldSBK circuit, with 12 race wins and 20 podiums recorded over his career.

With a very compressed series of races coming up in quick succession after this test Lowes is looking at Portimao as a chance to make adjustments to his machine, his riding position and even his riding style to allow his shoulder injury to have less of an effect on his full race pace.

After the Portimao test the team will relocate to France for the Magny Cours round between 3-5 September. After one free weekend the season will then finish its European element with three Iberian races in quick succession, before the final scheduled ‘flyaway’ rounds in Argentina and Indonesia.

“It is very important to have a test at this time of year because we get to work on our weak areas - stated Jonathan Rea - Electronically, it is always very hard to make steps during the race weekend so this test will focus on electronics and understanding the new asphalt in Portugal before race weekend. Portimao is a track I really enjoy and I am looking forward to spinning a lot of laps. It is important to look forward to find a good feeling with my bike, my team and follow this on to the next races which come along in very quick succession - only one weekend off in four. It is the most important time of the year.”

“At this test we have a few things to try on the set-up of the bike - said Alex Lowes -  We have an important period coming up with four races in five weeks, and we are going to try to improve the feeling on the front of the bike entering corners. It is an area I feel like we well we have a margin to improve. I am also going to use it as an opportunity to work on some riding style things. I have been struggling with my shoulder for the most part of this season and especially in the last couple of months. I am going to work on my riding position and my riding style to help that and in the long run that can have some benefits as well. I use my upper body a lot - not too much - but a lot. So I have a lot of things to work on. This test has come at a good time for us. At the last test at Barcelona I could not do so many laps but for this I am feeling good; ready to go. Hopefully it is going to set us up well for this busy period of the season.”

“We had very bad luck this year with our winter test program, finding many days of rain - added Guim Roda, KRT Team Manager - The way the test limitation rules were finalised gave us a certain margin to solve this and we agreed with the Portimao circuit to move one of the two days we had planned at the beginning of the year to the end of August. In this period track activity is less but for us it is very good to test in high temperatures - and set up the Ninja ZX-10RR on a track we do not use many times over the winter. This season, also because it was not possible to finally introduce the engine revs we planned to use, we need to find any tenth of a second anywhere. So let's see what we can find in Portimao at this test.”