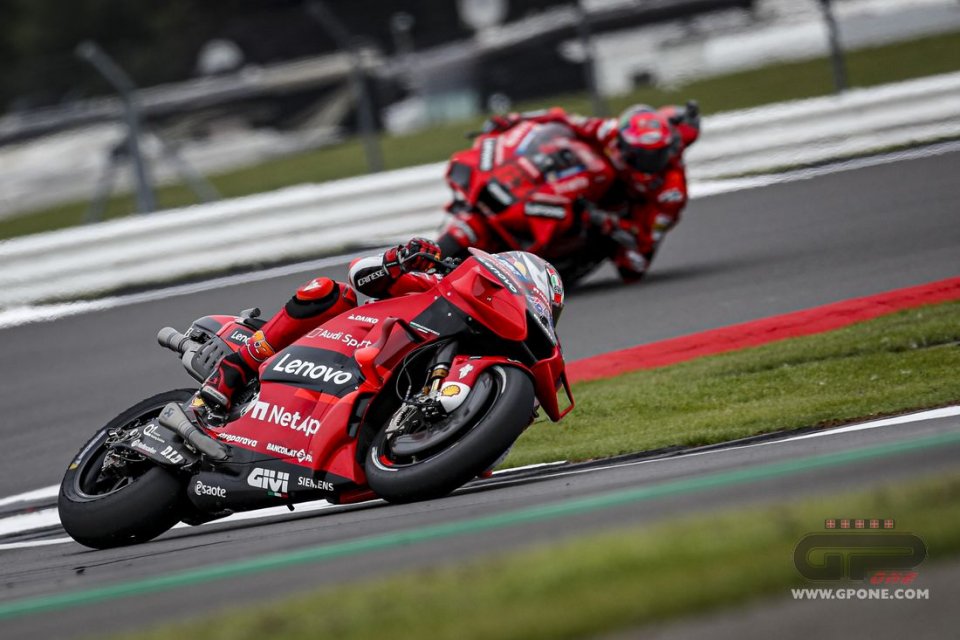 There are certain tracks that are better suited to some bikes and Silverstone has never been particularly friendly to Ducati, so seeing three Desmosedici in the top 6 after FP2 is a half surprise but also the confirmation that in these two years of absence from the British circuit the Borgo Panigale bike has made great strides forward.

The first to say so was Jack Miller, who was the quickest Ducati rider out there with the second time: “It was really cool to sort of compare my feelings I remember from 2019 to 2021 and how much the bike has developed over that time, over that period, and the positives of the bike – how much, especially in the first sector, through the sequences of left/rights, it’s a big step there. Your timing is much easier to get right in that first sequence, but also the physicality of the actual change of directions, the bike is doing it much easier. It’s a lot easier to be more precise, you’re able to get your timing correct pretty much every lap. It’s definitely better and it makes me excited to head to places like Texas”.

Bagnaia also agrees with the Australian: "I felt the difference even more than Jack - he explained - In 2019 I struggled a lot here; I didn't have an official bike like his. It was nice to get out on the track and not feel in so much difficulty anymore, but to be at this level. As far as setup and chassis are concerned, it is a massive step forward”.

Of course Yamaha with Quartararo is still making the difference, but according to Pecco today's results must be viewed in a particular light.

“You have to take today with a pinch of salt - declared the Italian - Fabio was very fast, but perhaps Marquez is even faster. I mean that today, with the cold, there are those who pushed more and some less. For example, I did not go to the maximum on my flying lap, because the front tire was not perfectly in temperature. But I did a good job, it always takes a little more time to sort out the Ducati, and tomorrow I expect a big step forward ".

It seems that the threat of rain has been averted and Ducati will be able to play with three strikers, the two factory riders and Martin.

"We all know that Jorge has a lot of talent, I expected to see him fast because this circuit adapts very well to his riding style, a bit like what happened in the third sector of the track at the Red Bull Ring. Maybe he will be able to make a little less difference compared to Austria, but I have seen his data and he makes the tires work well. However, it is difficult to have clear ideas about his pace at the moment ”.