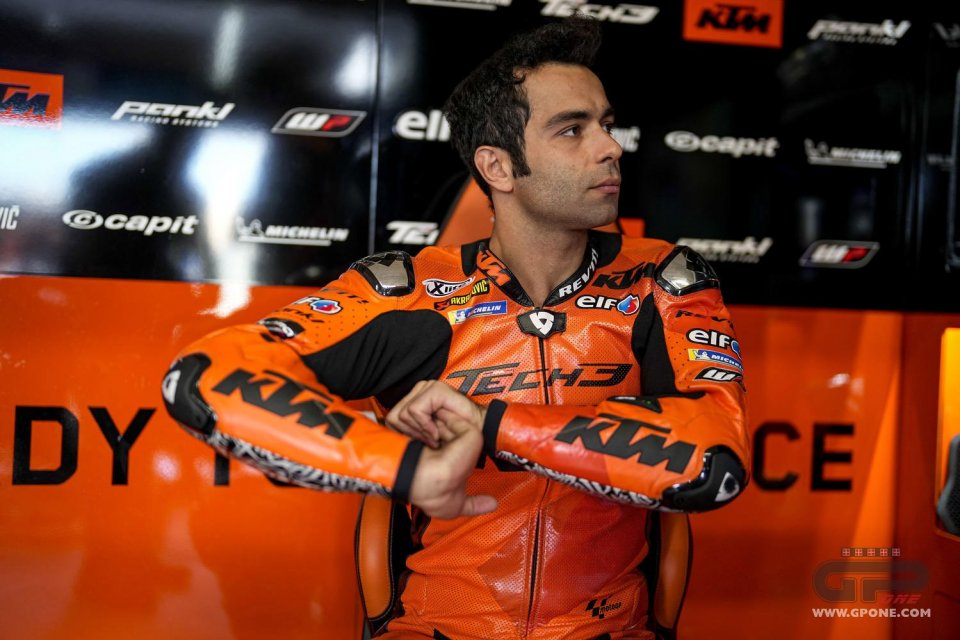 An off-road future is what awaits Danilo Petrucci at the end of 2021. The rider from Terni in the briefing with journalists before the British Grand Prix appeared decidedly oriented towards knobby wheels on a KTM. It’s an idea that Petrux at first almost did not take seriously, but which the facts have turned into the only viable option. The Ducati possibility in SBK faded with the signing of Alvaro Bautista, with the second Panigale V4R already assigned to Michael Ruben Rinaldi for 2022. Obviously no other interesting offers have arrived for Petrucci, who is therefore preparing to embrace this new adventure with destination Dakar.

"I don't have any big updates on my future - said Petrucci - I talked to KTM and we are starting to think about something for off-road, but at the moment I have nothing concrete to talk about. I know that off-road racing will be a wonderful thing for me, but for now I want to stay focused on MotoGP, on this final part of the season that I want to compete in the best possible way ”.

So the idea of SBK has completely vanished?

“Now I have no concrete offers from SBK. Nothing that is satisfying for me, so we will continue on this path. At least KTM has offered me something I like and so it's nice to stay with them ”.

Have you talked to any other riders who race in rallies?

“I talked to some riders who do rallies and they are the opposite of my world. Sometimes you sleep in a tent, wake up at 4 and start the leg at 5. Maybe you do 250 km to reach the special stage. In the end, that's something I want to do, because I recognize that in MotoGP you talk and look at the data more than the time you spend in the saddle. For me, on the other hand, the thing I love to do is ride the bike and this happens in rallies. We race more, we talk less and we post fewer photos on social media ”.

Is it a binding commitment with KTM?

“Of course I really appreciated the fact that KTM asked me to do the rallies, because we have always had a good relationship despite things not going the way we both wanted. We are committed to each other and probably also having offers from SBK or as a MotoGP tester, I would give priority to them instead of off-road. But now I don't have these very tempting proposals, so I prefer to go where my heart takes me and with whom has chosen to continue with me. We are talking, moving forward in the negotiations. I'm waiting to have a clear project and sit down face and face to understand. I told them that there are, to date, no other opportunities except this one, so I think that's what I will do. I don't know the terms; I don't know how we will do it but for me it is decided ”.

Did the rapport not bond after the way you found yourself out of the team for 2022?

“I've always been very honest in what I've done. On Saturday in Austria when they told me that I would no longer be a KTM rider in MotoGP, I told them that if we had had the opportunity to speak first, it would be me who said we would have to change something. As an organization, as a structure or even as a rider. Of course I think they were under pressure for the Raul Fernandez story, they didn't want to lose him. I don't know the way it went, they certainly didn't manage it well, but it happens to everyone to make mistakes. But they told me one thing they had never told me in the past, which was that they would like to keep me with them in some way for who I am. In the end we agreed. Neither they nor I are happy with how this 2021 went, but we have no regrets. I gave my all on and off the track, trying to bring all my experience. I would have liked to continue, but not like this, like these results which are not good either for me or KTM ”.

When do you think you will put the wheels off-road for the first time as an 'official' KTM rider? Do you think this means you have had enough of the track?

“I have no idea at the moment. I’ve started this project, but on the other hand there is a program to be organized, a budget. I am waiting to have the situation clear; I have nothing written in my hand. I am at an age where I can afford to spend two or three years in off-roading and then be competitive, also because my physique may be an advantage there. On the asphalt I can honestly see that I have no offers and I don't know if I will have any in the future, so ... I don't think I'll ever forget how to ride a motorcycle on the track, so I think I’ll remember that. At the moment I care about the ability to ride bikes both on asphalt and off-road ”.

What do you expect from Silverstone? Here you have always had good races.

"I have great memories here, even in the dry it is one of my favourite tracks only I'm almost never fast. As happens at Phillip Island, which is also one of my favourite tracks but on which I can't be fast and I don't understand why. In 2015 I fought to finish second. The last time we raced here, I had a good race, even if I was starting from the back. I remember a good start and then a good comeback. This is one of the historical tracks of the world championship, even if some points have been modified. It is a great challenge for everyone, there are many different types of corners and I know it will be one of the most difficult tracks for me on which to go fast. "

Where on the track do you think you have more problems?

“Silverstone is a very long track, there are many types of corners and I know that finding a good set-up won't be easy, because there is always something missing. The perfect mix is ​​hard to find. Here I won with Ducati in Superstock in 2011, but it was a completely different world. With the MotoGP bike I made the podium, but in the wet. In my opinion it will be tough for me and if I remember well, it creates a lot of blistering on the tires, so managing them well in the race will also be important ”.