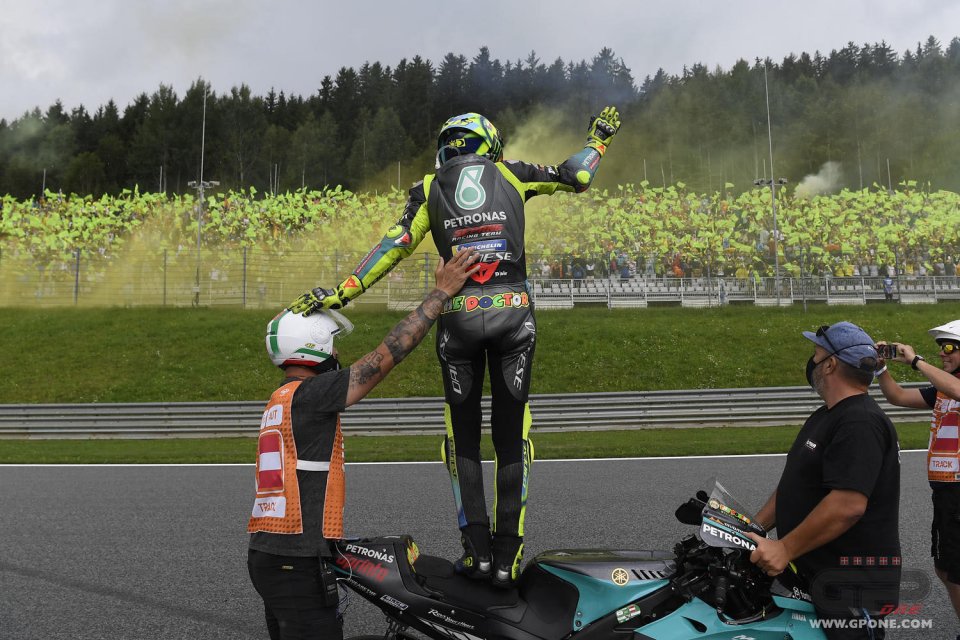 Valentino Rossi is gearing up for the last few races of his long career in MotoGP and he is doing so without any regrets. In an interview with MotoGP.com, Rossi spoke long and hard about his decision, also explaining how much the life of the riders has changed since the beginning of his career.

The Doctor has always faced life as a rider with a smile, with that lightness that has made fans from all over the world fall in love with him, making yellow the dominant colour at tracks around the globe, but now the time has come to simply stop and one can say that he is doing it with no regrets whatsoever. Valentino confirmed that he too would have liked to continue racing for another twenty seasons, but the reality is very different and he now seems ready to welcome it with a smile.

"I learned from my father that you don't have to take life, sports and results too seriously - said Rossi - because it doesn't make a difference, it’s not important for being better or going faster. You have to work hard but you must always try to enjoy and I think that was the secret to having such a long career. Outside of MotoGP I have a normal life, I have a good number of real friends and I think that's why I could stay for 26 years. "

Deciding to stop wasn't easy, but it was a decision made at the right time.

"I feel good, I think it was the right choice. From the other side, I'm not happy because I hope that this life continued for another 20 seasons but it’s like this. I decided for the results because you enjoy if you win. I'm not just talking about me, it's like that for everyone. Unfortunately in the last year for some different reasons I am not strong and fast enough to fight for the podium and the victories. The level of the riders is always higher and when you are older you have to train harder and harder. For sure I enjoy a lot less now, but I try to resist until the end."

Rossi: "I didn't want to stop while I was at the top because I don’t want any regrets"

Rossi also explained why he didn't choose to retire while he was still winning.

"I didn't want to stop while I was at the top because I don’t want any regrets. For this reason I am happy and quiet because I know I have been the maximum for a long time. Now it’s very important to stay concentrated and give the maximum for the second half of the season, I want to try to be better than in the first half, take more points and maybe some good results ".

Everyone agrees that Rossi represents the soul of modern MotoGP, but it is Valentino himself who makes it clear how much this championship has to offer even without him on the track.

"MotoGP existed before Valentino Rossi and will continue after me. In the last years the level has improved a lot. Before that, motorcycle riders was something more heart and passion. Now the younger riders are followed by some organizations like our Academy, which helps the riders to improve and train".

The Academy itself had started almost as a game, only to become something completely different.

"It's always fun but now it's a real work. We start to help my brother, Morbidelli and Migno. Then after with arrived with the team in Moto3 and then in Moto2. The MotoGP team is the last step of the ladder and everything is a lot bigger and more difficult. But I think we are ready; we have an excellent team. In the end we did it for our riders, to continue supporting them in MotoGP as well. "

Without Rossi on the track, there is a risk that Italian fans will lose interest in MotoGP. This will not be the case for Rossi.

"The Italian fans are covered for the future, to continue to follow MotoGP also without me."

Valentino also expressed a wish that he wishes to fulfil before the end of the season.

"If I could make a wish, before Valencia I would like to make a podium".