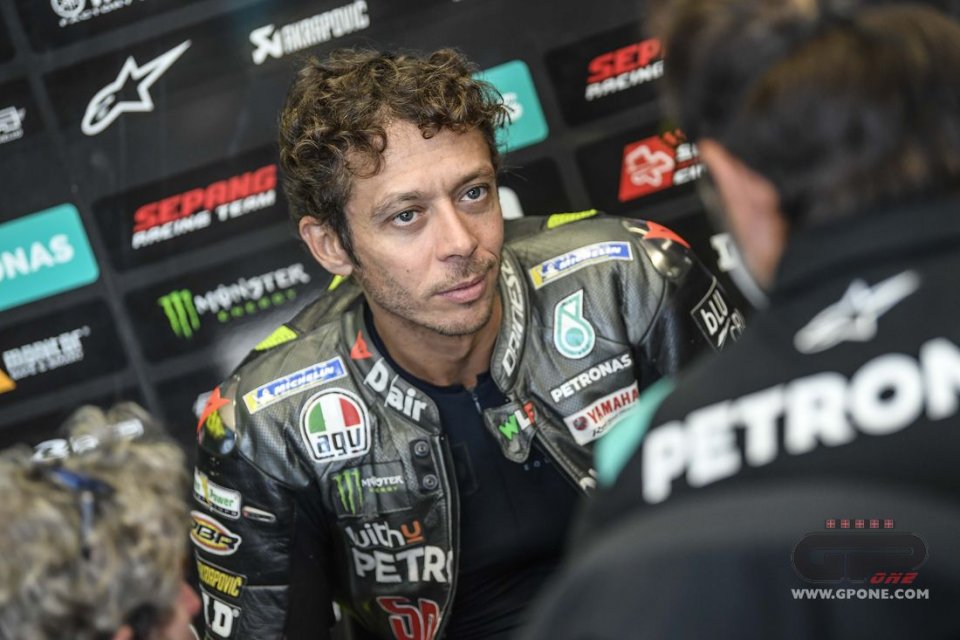 Yamaha is the main topic these days, starting with Vinales’ suspension, and then Petronas’ announcement to withdraw its sponsorship from the satellite team. Since Valentino is one of the symbols of the Japanese company, it’s impossible not to talk about these issues with him, starting with his former teammate’s apology.

“Today, Vinales said what he had to say. He was frustrated, he was really pissed off,, but he didn’t want to do any damage,” Rossi explained. “These things can happen, and he apologized. I think he can probably race again as early as the next race, and it would be better for everyone.”

This morning, we also got the news that, starting next year, Petronas will no longer be a sponsor of the SRT team, with which you’re racing.
“Last night they told me they’re terminating the teams in the Moto2 and Moto3, and it’s very bad news, because they were two top-level teams. Not to mention that Petronas is an important name in our field.”

They’re thinking of Binder in the MotoGP next year.
“Darryn has a lot of support from the team, and he should have been racing in the Moto2 in 2022. He already has the right physique for the premier class, but going directly into it from the Moto3 might not be easy.”

The satellite team is definitely weakened by this. How do you see Yamaha’s future?
“The team will still be there and will always be at the same level as now. The most important thing is the official team, and they’re not in bad shape. Quartararo is very strong and young. If there’s also Morbidelli, they’ll have two great riders. There are other constructors that have focused more on young people for the future, but I don’t see Yamaha’s situation as bad. After all, they’re leading the championship.”

Let’s talk about the race. You’ll be starting 18th tomorrow.
“I’m not very happy, because I could’ve done better today. Unfortunately, the second soft tire I mounted in qualifying had no grip. It didn’t work, and it was a bit frustrating. I could improve, nothing exceptional but, by a few positions, yes. However, the pace I kept in the FP4 wasn’t bad, and we’re all very close. I aim to get some points tomorrow.”

You weren’t the only one complaining about the tires today.
“Unfortunately, over the course of the season, it happens sometimes. That’s the way it is. Sooner or later, it happens to more or less everyone. It’s also a matter of luck and, in qualifying, you notice it immediately. There are tires that are a little better and others a little worse.”

Is it that difficult to make tires for the MotoGP?
“Obviously, yes. In the end, they have to ensure great grip, leave very little marks on the ground and, in fact, when something doesn’t work, you notice it at the maximum lean angle. I’ve talked about it many times with Taramasso (ed. Michelin manager), and he explained that they do a lot of tire tests with super-precision machines. As soon as they see that something’s wrong, they don’t even wear out the tire, but sometimes the numbers they see are good, and the riders complain. Today, I used four soft rear tires between the morning and afternoon. Three were fine, while the fourth wasn’t. It happens. We’re talking about a few tenths but, in the MotoGP, they make a difference. However, I know that Michelin is fully committed.”