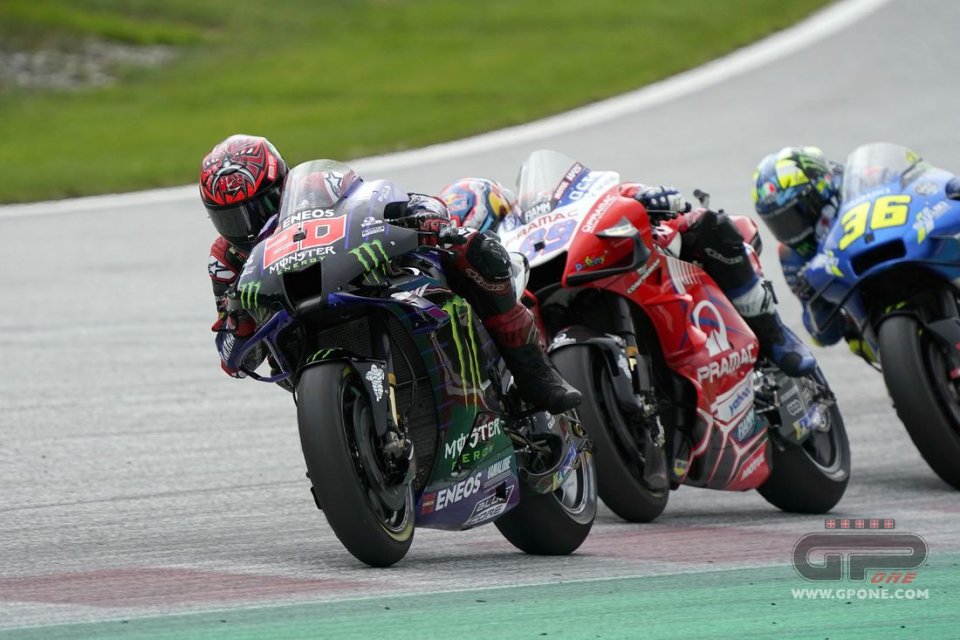 After a long race in which Bagnaia (Ducati) and Quartararo (Yamaha) battled curve after curve, also mixing it up with Marquez who looked to be some semblance of his former self, the rain intervened to put an end to the excellent race in the dry by the young French rider. After the flag to flag, the current world leader was unable to defend the podium and finished seventh, but he intelligently maintained his lead in the championship by not risking his luck in the wet.

Today in the dry it seemed that the Yamaha was on the same level as the Ducatis.

"I think my acceleration today was better than Bagnaia's, but he made it up in the straights. It was hard to keep their pace especially in the first two segments of the track."

A question of better tire grip or did you make it up on the lines?

"Pecco defended well in the early stages of the race always closing the corners early, but I think that I was able to not lose ground simply due to my greater experience over last year. Even when it started to rain and I still had the slicks on the bike, I wasn't thinking about the championship but just about going fast and making no mistakes. It was a shame to have lost the advantage in those last laps due to the chaos caused by the rain, but I think I did a great race, especially in the dry I proved to be very competitive, something unthinkable on this track ".

When in the last laps the rain became intense and you were faced with the choice of whether to continue with slicks and take a risk or return to the pits for the flag to flag, what did you think?

"I'll be honest - said the young world championship leader with a smile - I think it was the first time I really thought in terms of the championship and I opted for the safest choice. I knew that continuing to race as Binder did would be a stupid risk considering the advantage I have accumulated in the championship. I did not want to risk crashing, which by the way I had already risked with the first drops that landed on the track. From now and in the next races we will need to think even more strategically in view of the championship, winning it is my goal and at the moment I think I'm in a good position to do it. "

Having to do those last laps in the wet, what was going through your head?

"At first I lost confidence, after gritting my teeth for most of the race in the dry, the rain upset my plans. It didn't go as I hoped but now I'm already looking forward to the next race, at Silverstone, one of my favourite tracks." .

Mir mentioned that the current situation in Yamaha could weigh on your performance in the next few races given the expectations.

"This could be a strategy of my rivals, to put pressure on me, but I'm calm. The situation in Yamaha has no impact on how I manage the races, there will be no problems at Silverstone."

Looking at yourself from the past year, what has changed?

"I remember that last year on this circuit I had all kinds of problems, with the bike, with the track, with the electronics .. this year instead I think that apart from a small lack in terms of top speed we really gave the maximum, and certainly I have improved as a rider too. It's a strange feeling, in the past I was afraid of making contact with my opponents, while now, race after race, I just think about going fast, continuing to improve as a rider, and only rarely do I happen to keep an eye on the results ".

The next race will take place at Silverstone, what are your expectations?

"In my years as a rookie there are two moments that I think gave a turning point to my career as a rider: the first was in Jerez in 2019, and the second was the race at Silverstone, where I went much faster than I had hoped for. So even knowing that that track could favour the Suzukis, I pray that the weather will be good and that with a bit of luck in the dry I could do a really good result. "