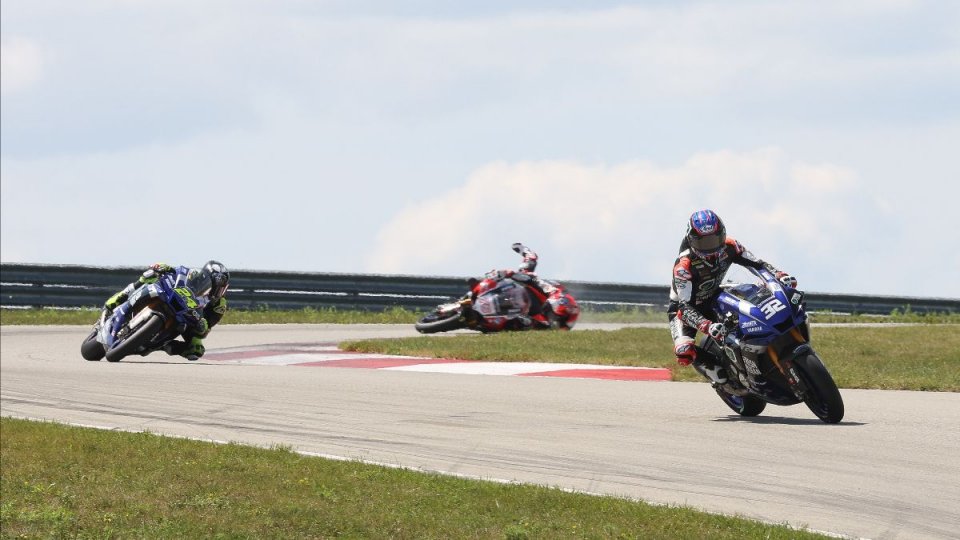 Fresh N’ Lean Attack Performance Yamaha’s Jake Gagne continues his record-setting season of MotoAmerica HONOS Superbike racing as he made it an even dozen today at Pittsburgh International Race Complex with his 12th straight victory of the year.

As is the norm for the runaway championship points leader, Gagne hit the front from pole position, was never headed, and ended up crossing the finish line 11.3 seconds over second place.

“It went really smooth for me,” Gagne said. “I could tell there was a bit of drama behind me. There were those laps where my pit board would grow all of a sudden. After yesterday, we had a lot of weird weather and I think we all were kind of caught by surprise at how hot the track was. When these Dunlops get that hot, they almost don’t last quite as long as you think. I had a couple moments there. I was trying everything I could to try to break that gap. If I got off the first lap in first, I had to try to go because I know these guys are coming. I knew they were going to be close in the race, looking at times. I had just a couple tenths here and there, really, but come race time anything can change. So, I had to be ready for these guys to be right on my neck. But it was a smooth race. I saw, like I said, there was some drama behind me, and I could kind of just inch away a little bit. Half second here, half second there. But this is the type of track, even though I had a nice lead right there, not too far in the beginning, you can’t lollygag around. You can’t let up, because that’s when something bad happens, especially this place. It is tricky. It can catch you out. So, I just tried to keep my zone and focus and at the same time kind of try to think what we can do a little bit better tomorrow, because these boys are going to be coming. They don’t want to finish second or third. Hopefully, we’ll keep the progress going. Hats off to this team because Yamaha 1, 2, 3 is amazing. It shows how awesome these boys are rolling.”

It takes a lot for someone to overshadow 12 wins in a row, but on a sunny Saturday at Pitt Race, Toni Elias came pretty close to doing just that. In just his second race of the year and his first-ever outing on a Yamaha YZF-R1, Elias came off the couch to finish second on Josh Herrin’s Fresh N’ Lean Attack Performance Yamaha. Elias, who first threw his leg over the Yamaha on Friday, slotted in behind his temporary teammate Gagne and finished there.

“Honestly, I don’t know,” Elias said when asked how he did what he did. “It’s been a strange year because I really wanted to race this year since the first race, but I was fighting for an option. I put everything on the table to make it happen. In December, they said they didn’t want me, so I’ve been a little pissed off for months. At the end, Kyle Wyman gave me the opportunity to come back. I just wanted to have fun, to ride the bike, to ride in Laguna, and that motivates me. After that, I told my wife I want to race again. I’m angry. I need to fight again for wins and fight for the championship, but I need an opportunity. So, now arrive. The opportunity is here. Last year was difficult. Many people doubted about me. This is the confirmation I’m still competitive. I received this phone call from Attack Yamaha. I said yes in the second one. I didn’t ask for anything. Just yes, I want to come, I want to ride, I want to try it. It’s been amazing. I arrive here, I feel at home. The bike gave me a super good feeling. I felt safe. I felt I could push since lap one. This bike has a big potential. Just right now I’m not used to it yet. I think with more opportunities or more time I could be much better. I couldn’t think the first race I would be on the podium, so it’s amazing. I cannot ask for more. Congratulations to Jake. He is one step closer to close this championship. Thanks to the team. They treat me so good and all the sponsors who support me, my family during this time. Tomorrow we will have another one, enjoy, and that’s it. After this race, we will see. Josh Herrin will come back, so looking forward to the future. I want to continue racing. I’ll be ready.”

Elias ended up some three seconds ahead of Westby Racing’s Mathew Scholtz. The South African had survived a hectic first lap with nemesis Loris Baz, the Warhorse HSBK Racing Ducati New York-backed Frenchman slamming into Scholtz at least twice in the first handful of corners. Baz would come under attack from M4 ECSTAR Suzuki’s Cameron Petersen straight away with France clashing with South Africa for a third time in three corners. On the third lap, Baz was gone after crashing out of third place.

From there, Petersen held the spot for a few laps before being passed by Scholtz, who would hold on to third for the rest of the race with Petersen finishing fourth.

“I got off to a pretty decent start,” Scholtz said. “I was behind Jake (Gagne). I was thinking about diving him, but in corner one the outside of the track comes up quickly. So, if you kind of over-try to slide there, you’ll end up running off. So, I was a little bit worried about that. I was going to try to maybe slipstream Jake and get him up into corner three, but Toni (Elias) passed us, and I had to check up slightly. I kind of just thought from there, let me tag onto these boys. They had a pretty decent pace. Going from corner three into corner four, (Loris) Baz T-boned me. We both lost time. Out of the seat going down into corner five again I broke so late. Got to the apex, knee on the floor. The guy just kind of T-boned me a little bit. Kind of shuffled me back. I kind of caught up to Cameron (Petersen) and chilled with him for a couple of laps then managed to pass Cam, I forget which corner. I could see Toni was a couple seconds up, and I really thought I was going to catch him, but it just seemed that if I pushed harder, I just kept on getting kicked out of the seat, almost losing the front. We have to go back and try to figure out why I wasn’t able to drop down to those practice times. Otherwise, I’m pretty happy to be back up here. It’s nice to obviously gain points in the championship over the guys in third, which is positive for us, but I’m not really too happy because we weren’t doing times that we should have, and it was just a difficult race. But overall, I’m taking the positives and looking forward to the second race.”

With Petersen fourth, fifth place went to a lonely Scheibe Racing BMW’s Hector Barbera with the Spaniard 17.9 seconds behind Petersen and eight seconds ahead of Panera Bread Ducati’s Kyle Wyman in sixth. FLY Racing ADR Motorsports’ Bradley Ward was seventh and M4 ECSTAR Bobby Fong was eighth after starting the race on pit lane and finishing lap one in 26th place.

Ninth place went to Altus Motorsports’ Jake Lewis, the Kentuckian winning the Superbike Cup race in the process as the top finishing Stock 1000. Hayden Gillim, in his first Superbike race of the year on the Franklin Armory/Disrupt Racing Suzuki, was 10th overall and second in the Superbike Cup.

Gagne now has an even 300 points after his 12th win of the year and that puts him 88 points clear of Scholtz, 300-212. Petersen is third with 174 points, 25 more than Fong. The absent Josh Herrin, who is missing his second consecutive race weekend due to COVID-19, drops to fifth in the title chase.