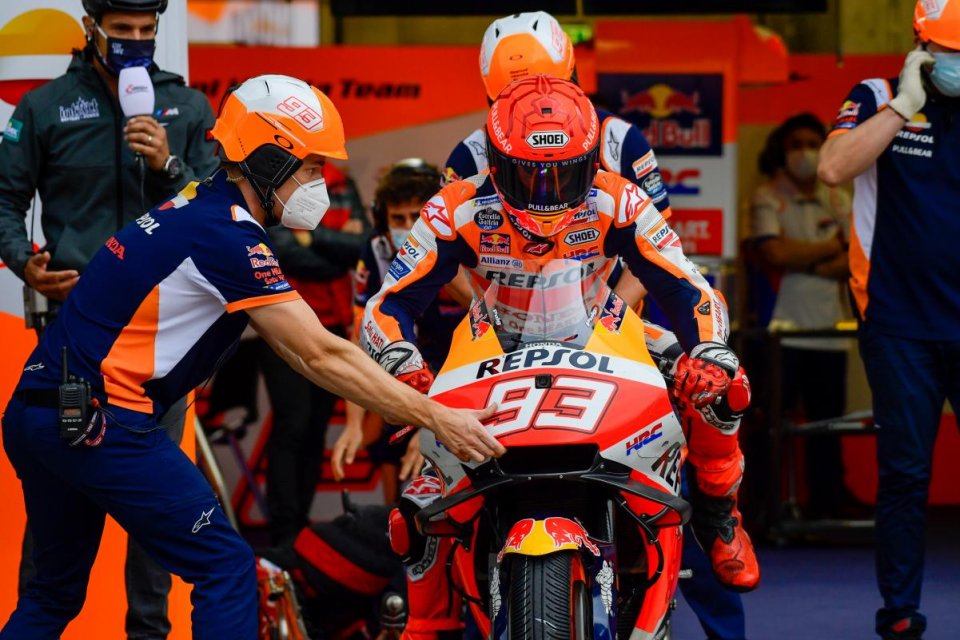 This weekend’s race at the Red Bull Ring is going to be a tough one for Marc Marquez. Friday saw the multiple champion having to settle for ninth quickest time more than a second from the top. In addition to the limits of the Honda, there is also the physical aspect for the Spaniard to worry about, as he has to deal with the condition of his right shoulder.

Magic Marc doesn't want to throw in the towel however and is gritting his teeth in an attempt to find the right way forward.

“On this first day we tried to carry on with our development work - he commented - I had the opportunity to discuss everything with the Japanese technicians, trying some things and using the same chassis as last Sunday. Tomorrow we will have another look, trying to take one step at a time. The goal is to be more competitive for the weekend. "

However, there is the shoulder to put him to the test.

"This is not the best track for me, I will have to suffer, as some of the braking sections are very demanding. Here the right shoulder is very stressed, so much so that last weekend I struggled, as well as this morning. At first, I feel competitive, but then, as the minutes pass, I start to suffer and I have to survive. But this is not new to me”.

One thing is certain: Marc is taking a long time with the intention of returning to being the Marc that everyone knows.

"The idea is to go back to being the Marc I once was, but I can't promise it, since no one knows. I always work and I keep the expectation of returning to being the rider I was. But I must be patient, trying to take one step at a time, without being in a hurry. As I have said several times, the intention is to return to rediscovering the sensations of before. The goal is not to win immediately or the most number of races, but to get back to riding following my instincts and regaining the competitiveness I had before the Jerez accident. Obviously my opponents improve and get stronger, but I don't have to be frenetic about it ”.

The #93 couldn’t have been any clearer and more transparent…

“I'm a realist and I know that patience is one of the virtues a rider needs. Obviously all the riders want to be strong as soon as possible, but experience has taught me that you need to be calm. However, I am working, both on my body and on the bike, trying to improve it ”.

Marquez then spoke again about the topic of safety, discussed several times by the riders.

“Turn 2 and Turn 3 need to be revised, but Turn 1 also needs to be revised. More than the turn it is the way a rider ends up on the ground and then happens to find the bike in front of him. We saw this morning what happened with Beaubier, where something similar to last year almost happened. Apart from this there are also other tracks on which we must dwell, like Jerez, where the run-off areas are not wide and the wall is close ”.

He concluded with what happened with Mir, an overtaking move that forced Joan to straighten the bike up.

“In FP2 I had a small electronics problem, but we solved everything in a minute. Mir? I was two seconds faster and passed him as I always have. I saw him and I passed him ".