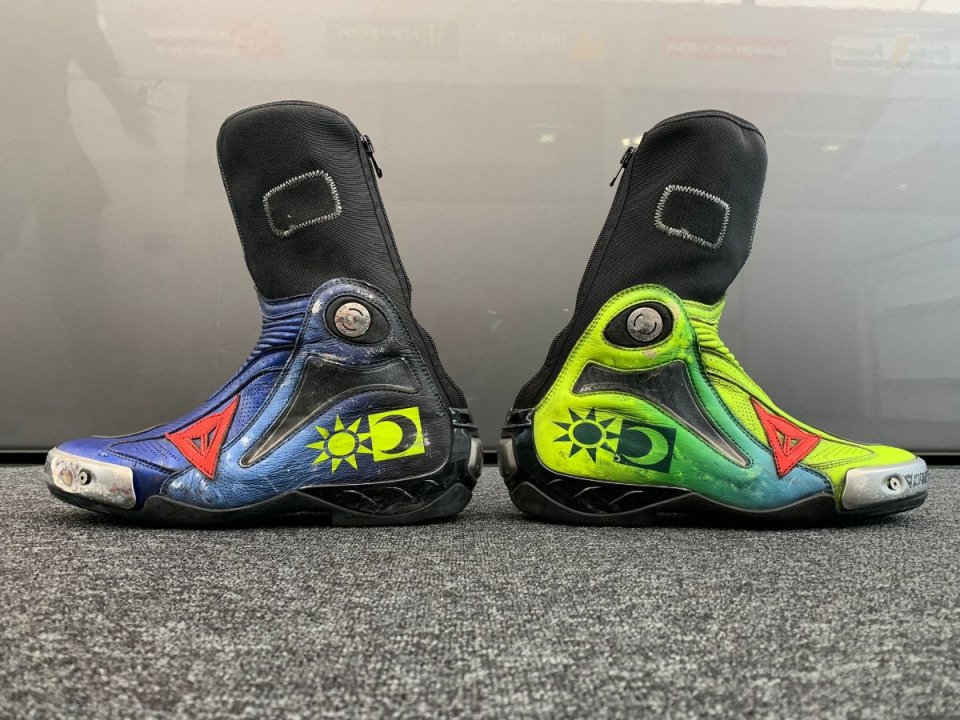 MotoGP legend Valentino Rossi has recently announced his forthcoming retirement from racing and has very generously donated a pair of his Dainese racing boots to be auctioned off by Two Wheels for Life.

This is the first time Two Wheels have been able to auction off racing kit from Rossi, and they are boots he has worn in MotoGP races during the 2021 season.

Rossi’s boots are just one of many fantastic MotoGP memorabilia items that will be available for auction on stage at Silverstone during the Monster Energy British MotoGP race weekend at Two Wheels for Life auctions on Friday, August 27, and Saturday, August 28.

The aim is to bring a wide selection of auction items to the different stages and make them open to as many bidders as possible.

Other items include signed knee and elbow sliders from Repsol Honda star Marc Marquez, boots, sliders, and a signed visor from MotoGP Yamaha rider Fabio Quartararo. More items are being added every day by the generous MotoGP riders and teams.

British-based charity Two Wheels for Life is now able to confirm more details of what’s going to be happening in terms of fundraising activities across the weekend of the British MotoGP™ event at Silverstone.

While it’s going to be another year before the traditional Day of Champions format returns, thanks to the interruption of the pandemic, the charity has worked hard to bring some amazing chances to get involved from August 26 to 28 at Silverstone.

The annual Day of Champions event is a vital fundraising event for the charity but was sadly cancelled in 2020 along with the British MotoGP event at Silverstone due to the pandemic – this left a 60% funding drop for the charity to deal with.

While the 2021 fundraising event will be different from the traditional Day of Champions events, there’s still a huge number of things happening and thanks to the backing of MotoGP™, Monster Energy, and Silverstone, it’s hoped the day can raise a large amount of vital funding.

Here’s a detailed rundown of what’s happening from August 26 to 29 as Two Wheels works hard to raise vital funds for medical support and treatment in some of Africa's poorest and most remote areas.

Day of Champions Ride In with Randy Mamola and John Hopkins

We’re very pleased to share with you that the Day of Champions Ride-In including the chance to ride on track at Silverstone, will go ahead this year.

Led by Niall and Taylor Mackenzie, the ride will sweep through the English countryside to Silverstone where riders will take to the track on the famous British Grand Prix circuit.

Following the track session, the convoy will head over to our friends at The Super Sausage Cafe for a get-together with a breakfast bap and a hot drink along with some surprises too!

All ride-in participants will be entered into a FREE prize draw for exclusive, signed MotoGP memorabilia.

Live action on the Monster Energy stage and Silverstone Mainstage

The MotoGP memorabilia auction is back! Auction items have been flooding in, including the Rossi boots and other items detailed above with more being added all the time. If you're a MotoGP fan, make sure you are ready and able to bid on the racing weekend.
We’ll be sharing which guests will be appearing on stage for MotoGP insider chat, track tales and paddock banter in the very near future.

All of the auctions and other stage action will take place on the Monster Energy Stage located on the outside of the track at Copse, and the Silverstone Mainstage in the usual infield location and will be shared over our social media channels ahead of the event.

Piloted by Ducati test rider, Franco Battaini and former Grand Prix racer Fonsi Nieto – you’ll be riding pillion on this special MotoX2 bike reaching huge speeds on one of the fastest race tracks in the world.

Not only will you complete a thrilling lap of the Silverstone circuit on the same weekend as the stars of MotoGP  but each passenger will also receive access to the MotoGP paddock for the day and will be VIPs in the Ducati hospitality where you will be served food and refreshments.

Two Wheels will be selling raffle tickets across the weekend of the event both from our stand located on the Silverstone infield thanks to our amazing volunteers who will also be moving around the Silverstone site throughout the weekend.

Buy British GP tickets here
All MotoGP ticket holders for each day will have access.

The newspaper "Iltalehti" reports on its website that construction companies Maanrakennus Pekka Rautiainen ky and Macra oy have filed compensation...
5 days 7 hours ago