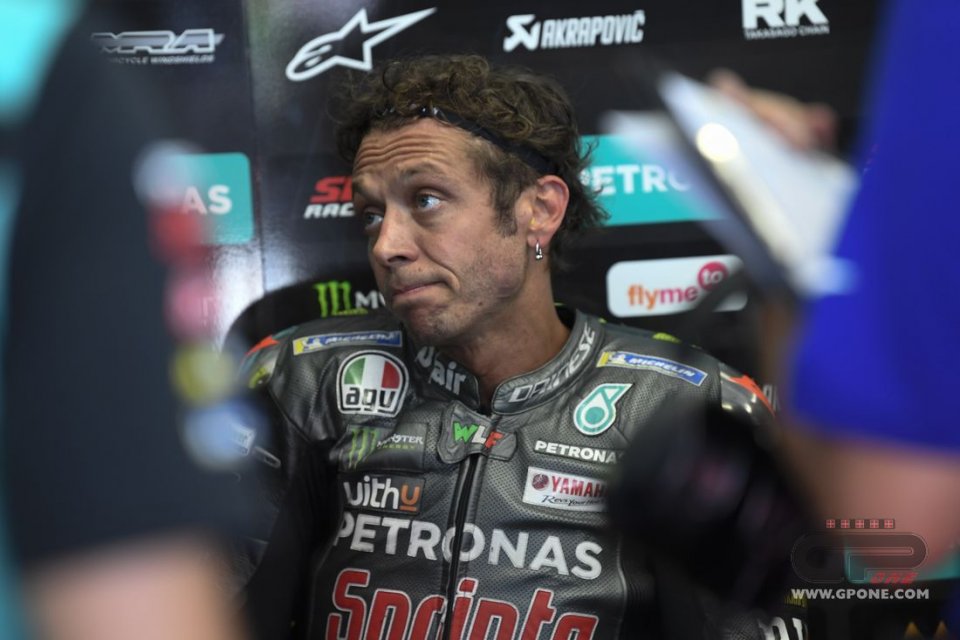 Sun in the morning and rain in the afternoon, on the first day of the second weekend at the Red Bull Ring the protagonist was the weather. Valentino had mixed feelings on the Petronas team's Yamaha but, before commenting on his tests, he answered a few questions on the hot topics of these days. The first concerns Vinales, because last night a video showing the Spaniard overrevving the engine of his M1 in last Sunday's race was released.

"I saw the video and I expected worse - said Rossi - He went to the limiter a bit, he overrevved it 2 or 3 times, but I don't know if those are the key moments. It was certainly a bad gesture, but not that extreme. It is always difficult to understand what happened when you are not inside, maybe there were already some disagreements and that was the straw that broke the camel's back. Maybe there is something else behind it ".

News also leaked yesterday that Petronas may leave the SRT team and that the Moto2 and Moto3 teams may be shut down.

“They didn't say anything to me, I think they will talk about it in the next races. It would be a shame because we are talking about a very important sponsor for all the world championship, moreover the eventual closure of the Moto2 and Moto3 teams would be a defeat for the whole environment. I hope they resolve things”.

Continuing on the subject of sponsors, when is the conference announced by Tanal for your team?

"I don’t know the latest developments, I hope everything is in order because we are talking about a good project, we will see what happens in the next few days".

Are you worried at all?

"For us this was not a long shot to try to solve a match, they gave us certainties and I tend to trust the people I talk to."

Last week you announced your retirement, do you think you can come back for a test or a wild card, like Pedrosa or Crutchlow?

“What I've learned in my career is to never say never, but at this moment I'll say that I don't think so. Compared to Dani and Cal, my problem is that I am older (laughs). But why not? I think that I will miss riding a MotoGP bike and maybe I can have a chance to try something that I will miss deeply. But we don't have any plans, it's one story to try the bike in a test, but it's another to try and make a race, but if it did, I would prefer somewhere good for me like Mugello, Misano, Assen or Barcelona. "

Pedrosa said that after racing against these young riders he appreciates what you have done even more.

“In MotoGP the level is very high and in the last two years the situation has changed from many points of view. When you are young, everything is easier for you and the new riders are all very strong, very aggressive, and the races are very tight from start to finish. However, it must also be said that Dani showed what he could do last Sunday ".

We haven't talked about this free practice day yet…

“In FP1 I didn't go too badly, the track had good grip and we could work for the race. My sensations were pretty good and I was much faster than a week ago, but at the second GP it's normal that everyone is faster. In FP2 we found particular conditions, because it was raining but the temperatures were high, so a dry trajectory was quickly created on the asphalt. It went well as long as there were full wet conditions, but with wet asphalt we can't get the rear tire to work well. "

Ixon, the supplier of Aleix Espargarò's suit, has revealed data from his crash at Silverstone. The airbag deployed in 950 milliseconds
9 hours 22 min ago