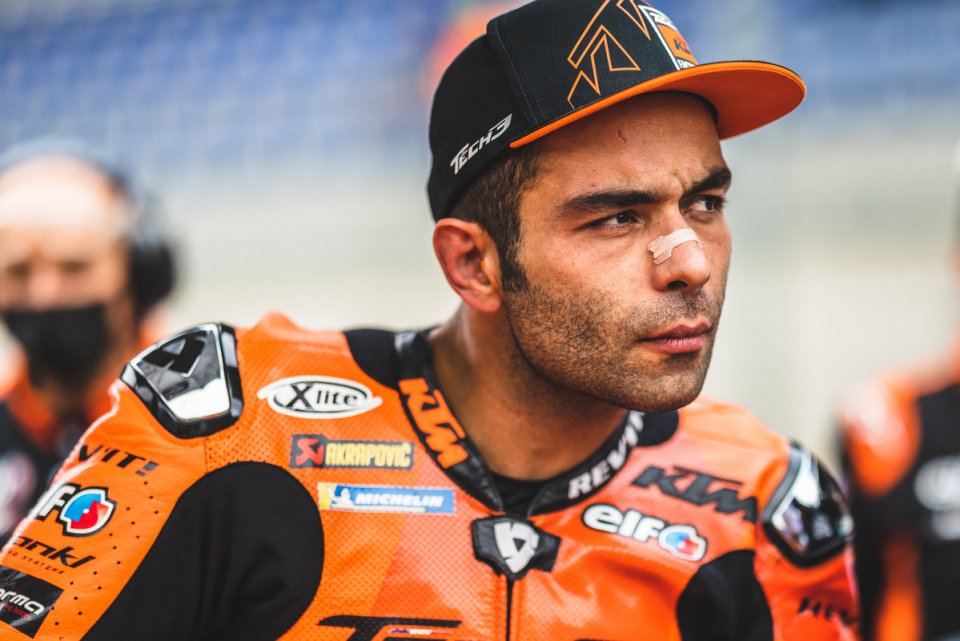 Danilo Petrucci certainly cannot complain too much about his situation. Only last Saturday it seemed that MotoGP had slammed the doors in his face and that there were not many chances to continue in the top class. In addition, there were also some difficulties in talking with the SBK Teams who could have welcomed him into the production-based world championship.

Today, however, the situation appears completely different and the idea of leaving the asphalt completely to tackle the sands of the Dakar desert does not seem to be the only possibility available for the Italian rider. In the usual debrief with journalists at the end of Friday free practice, Danilo made it clear that he had a possibility that initially seemed remote, but which in reality is not at all.

"I'm talking to many people for the future - commented Petrucci - the important thing is that I have to decide what to do and I think I will continue to talk to everyone because I need to have a clearer picture of what could happen. I know that Alvaro Bautista would like to come back to Ducati SBK, I think I need to clarify things. For the moment, nothing is decided. "

There are currently two Yamaha M1s from Team Petronas to be assigned. Is this a possibility you have been looking into?

"During this time I spoke with Stigefelt of Petronas, but the situation was not clear. They had to talk with Yamaha, then there is this news in the air of Petronas' withdrawal. Since we have been here, there has been no more opportunity to talk to them because I think they had other things to worry about. It is something that for now has not continued. "

Yesterday you seemed very interested in the Dakar with KTM, maybe you were discouraged by the apparent lack of alternatives?

"I am always present and the reality is that currently the Dakar with KTM is the only real option I have. We are talking to Ducati for SBK. I don't know if I am one of the favourites, because Scott is going strong, also Bautista would like to come back. To date the situation is not clear on this too, let's see in the next few hours if anything will change. I’m lacking the pieces to have a complete picture and decide what to do ".

Yesterday you said you don't have a physique suitable for modern MotoGP. Are the tires or aerodynamics the main problem?

"Things got worse for me when Michelin introduced the new casing at the rear. Before, I used to brake better using the rear, while today it is not possible to do so. I realized this at the start of 2020. About the aerodynamics aspect, I was losing a bit but before in Ducati I had a big engine advantage, even if the smaller riders still had an advantage. Only that before I could make up the small gap in braking by making more use of the rear, which now I can't do. Aerodynamic progress was also important, it helps a lot in acceleration. Here there are some stop & go that don't help me, let's say that as far as I'm concerned, the situation is a bit the sum of these things. It depends both on the tires and on the aerodynamics. Not having great confidence in braking, it becomes really difficult for me to recover what I lose on the straight ".

"Today we worked a lot in the morning and found something interesting in the braking, an area where I usually struggle a lot. The situation is not easy because I lose too much on the straights, but maybe we have some ideas to reduce the wheelies when coming out of the corners, something that could help me a lot. In the afternoon I tried with the soft wet front, but I did it to save some wet mediums because we don't have many available. Then I have to improve because I'm usually fast in the wet, instead, even in these conditions I was slow ".

Lecuona put the slicks on and went very fast. How come you didn’t try?

"I could have put the slicks on like Iker, but I don't know how useful it would have been. The forecasts are not clear for this weekend, so I thought about the race. I only lapped when it was very wet, I think that in the morning I can improve and get closer to the others. I haven't tried the new front Michelin hard yet; I don't know if tomorrow will be the time to try it but I think so. But maybe the medium front will be fine already."