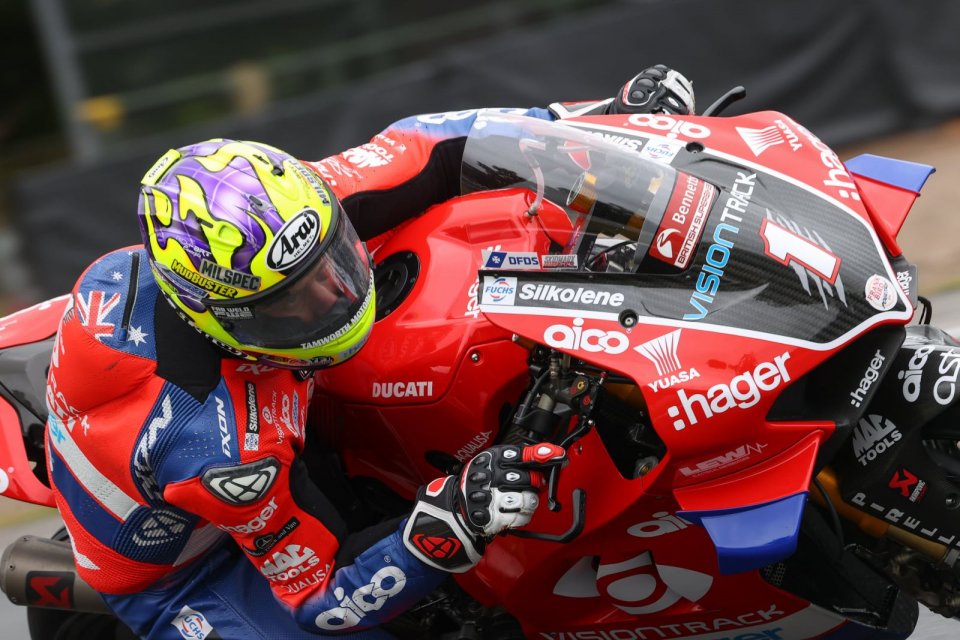 In motorcycling the #1 is reserved for the winner of the previous season, who reserves the right to decide whether to use it or not. In the annals there are numerous cases in which the defending champion has preferred to stay with his traditional number, for example Barry Sheene, Valentino Rossi, Marc Marquez and Joan Mir, just to name a few. Marketing choices that have often divided fans, even if in World Superbike it has featured on the fairing of Jonathan Rea's Ninja since 2016. Nonetheless, the #1 has always had mixed fortunes (very few lately), a modern curse that has also hit Josh Brookes in British Superbike. After last year’s win, for various reasons he has suffered more than expected in this start of 2021, so much so that he has taken the drastic decision ... to go back to his "classic" #25 in an attempt to turn around his fortunes.

After winning his second title in the UK, the Australian had optioned the #1 plate (in BSB it had been absent since 2012) for the current season for the following reasons: "Using the number 1 has always been something I wanted to do in my career, but as I often changed championship or category it was not possible. Now I will finally be able to do it and my goal will be to be able to defend it". There’s a big difference between words and deeds however and the ambitions of the VisionTrack PBM Ducati rider vanished over a handful of weekends: far from the top, excluded on several occasions from Q2 and major difficulty in reaching even the top- 10 in the race, a performance bordering on the unrecognizable.

Obviously, these results have got nothing to do with the #1 plate on the Panigale V4-R, but Brookes' performance is, to say the least, worrying. Although the "Rossa" is almost identical (except for some inevitable updates) to the one that allowed him to triumph in 2020, in the first four rounds he has scored a measly 58 points in 12 races, 174 points (!!) away from the top of the Regular Season, Jason O'Halloran, and 30 from Lee Jackson, the rider occupying the final place to enter the Showdown. Without forgetting three successive times he has been excluded from the decisive Q2 in qualifying.

Explanations? Various. At first there was talk of a complicated adaptation to the new Pirelli SCX spec tyre, poor grip at the rear, while later rumours circulated of an alleged injury in training with a motocross bike in the pre-season, not confirmed by the interested person. In this sense, in the beginning this possibility was confirmed in his positive exploits in the wet (where you push less) at Brands Hatch, only to sink back into the rear end of the standings in Race 3 at Thruxton in the same conditions.

Technical reasons aside, the last time that the #1 plate was present across the Channel was with Tommy Hill, but the Swan Yamaha rider (at the time) failed to repeat his 2011 win. Almost like dejà vu, history has been repeated over ten years later. On the cards for days, torn between superstition and personal jinxes, Brookes eventually thought about ​​re-embracing his long-time and beloved #25, used until 2020. Nothing formal has appeared on social media, yet in the entry list issued by the promoter MSVR relating to the Donington Park 'National' round scheduled for this weekend, there is a change in number. Will that allow him to patch things up and get him back to the positions that matter? In short, the brutal taboo of the #1 plate does not respect anyone and we will have to wait again to see if he can subvert every prediction. Meanwhile, in the hope of seeing a demonstration of pride from JB, we can joke about it by taking Shane Byrne as an example, a rider who has always remained faithful to #67 despite his six career laurels in BSB.

At Silverstone it's back to normal: get on the Desmosedici for a ride