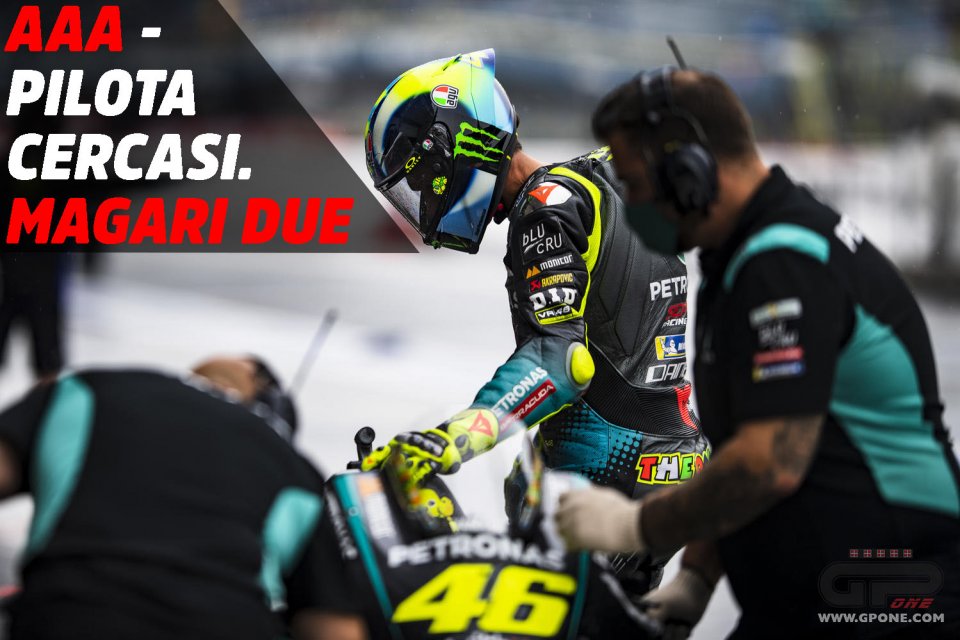 We are at heading towards mid-August and the Petronas Yamaha Team has not yet formalized either of the two riders it will line up on the track with in 2022. We are talking about the team that launched Fabio Quartararo in the world championship in 2019 and which in 2020 picked up seven race wins allowing Franco Morbidelli to finish as world championship runner-up. A team with Yamaha M1s available, whether it's Spec-A or Spec-B, we're always talking about two of the best bikes on the grid.

Yet this is the situation and as time inexorably goes by, the scenario becomes increasingly complex for Razali & Co. A domino effect triggered by Vinales' desire to part with Yamaha, which favoured the passage of Morbidelli in the factory team for 2022, and it was then in a certain way amplified by the retirement of Valentino Rossi, who probably, if he wanted to, could have continued for another season with the Malaysian team. However, the timing of the two episodes has partially put the team out of action for the 'strong' names in the riders’ market.

KTM has signed Gardner and Fernandez, while the third rider in the standings, Marco Bezzecchi, will most likely end up on Team VR46's Ducati, pursuing a path that was designed specifically to accompany talents from Moto3 to MotoGP. Another talented rider who has already found a place in MotoGP for 2022 is Fabio Di Giannantonio, who has found a home with Gresini and Ducati.

In Moto2 the interesting name is that of Arbolino, a great friend of Quartararo

So where can Petronas fish to find talented and experienced riders? From Moto2, the only name that could really prove interesting is that of Tony Arbolino, who may not have yet fully found his own dimension in the middle class, but who is certainly not lacking in talent. A MotoGP opportunity could come sooner than expected for Arbolino, who among other things is a great friend of Fabio Quartararo and who, as far as we know, has also received the support of the Frenchman for this promotion within Yamaha.

Another possibility, confirmed several times by Razali, is to promote Dixon from Moto2. Jake is already in the Petronas family, but the problem is that he is not performing well in the middle class.

The only other direction Yamaha could look into is SBK, but Jonathan Rea has eliminated himself from the equation, by confirming that he didn't want to move to MotoGP but would rather end his SBK career as a king. Then there was the American road that lead to Garrett Gerloff, only the American has signed a contract to stay in SBK also in 2022. But who did the American sign this contract with? Precisely with Yamaha, so would it really be so complex to 'promote' him to MotoGP? Having an American rider on the grid would suit everyone, especially Dorna which needs an English-speaking rider and who is also looking for an heir to Crutchlow at the moment.

If we remain in MotoGP, there are also other riders who may be of interest to Yamaha and Petronas. Andrea Dovizioso is not among them, as Razali has already said and Danilo Petrucci is not part of the Malaysian team's plans either. Yet there is another rider in the current MotoGP line-up who could be very interesting for the Iwata manufacturer and we are talking about Iker Lecuona.

Lecuona is in the game. Young but experienced

The Spaniard was literally thrown into the deep end of MotoGP without adequate preparation, but if we look at his overall performance, it wasn't disastrous at all. He has shown himself to be very fast in the wet, he is young and has the advantage of knowing the championship and the tracks. The Yamaha is also a much easier bike than the KTM, so having spent almost two years riding the Austrian bike may have prepared Iker for the transition to a friendlier prototype to be pushed to the limit with greater ease.

The M1 is known for being a bike capable of making the rider perceive the limit clearly, so the Spaniard would find himself in a different technical situation that would perhaps go better with his background as a rider. In short, there aren’t many alternatives, there are two free bikes and the number of interesting and available riders will tend to taper off in the coming weeks. Yamaha has to come to a decision and it has to do so quickly…