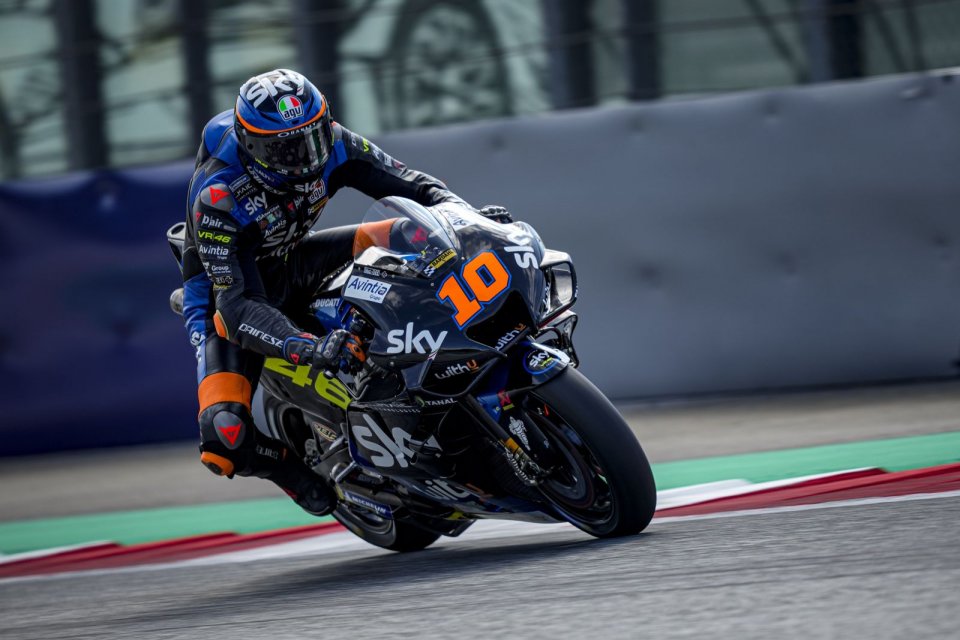 The frantic Sunday at the Red Bull Ring propelled Luca Marini to a 14th place on the finish line. In the sixth points zone of the season (now rising to 16 points in the championship), the SKY VR46 Avintia team rookie arrived not that far from his teammate, Enea Bastianini, and his brother, Valentino Rossi, but the result was negatively affected by an anomalous lack of grip of his rear medium tire.

“At the first start, I felt I had good sensations on the Desmosedici. Unfortunately, starting at the next warm-up lap, I had unusual grip problems with my rear tire, which we had decided to replace during the prolonged stop.”  he stated. “Maybe it was due to the fact that Michelin had not indicated it as a possible solution for the second restart. In this sense, those who switched from soft to medium, for example, instead of using a new compound of the same specification, proved to be lucky. Luckily, I wasn’t the only one. I knew the same thing had happened to Marquez and Bagnaia. I tried to make as few mistakes as possible. I’m a bit disappointed, because I could’ve achieved something better. But, looking at it overall, my finishing position is decent, even if I would’ve liked to have lapped faster, especially in the opening stages.”

At the same time, he had the opportunity to further test (and for the very first time in the race) the unprecedented lowering device designed by the Borgo Panigale technicians, now present on every bike on the grid.

“I was at ease throughout all twenty-seven. We already have numerous buttons, so I had to get used to pressing the holeshot one, especially during the race, when I kept an eye on the mappings more, considering that we have to watch out for wear here. In any case, I’m happy. This allows us to be on the same level as our opponents and not lose too much ground in the acceleration phase.”

Nonetheless, Lorenzo Savadori’s violent crash with Dani Pedrosa’s KTM held center stage. In short, listening to the other riders, three red flags within a year are certainly nothing new.

“On this track, the red flags are statistically probable. The accidents that have occurred up to now have always worked out, but we’re playing with fire. Will it be the same in the future? Good question. Turn three is very dangerous and tight where, if you fall, it’s very likely that the bike will remain on the track, like it did today. Starting next year, they should be adding a chicane right at that point. This would help reduce entry speed. However, other circuits are also the same. Higher safety standards would be needed along with the relentless technological development of the MotoGP,” he concluded.