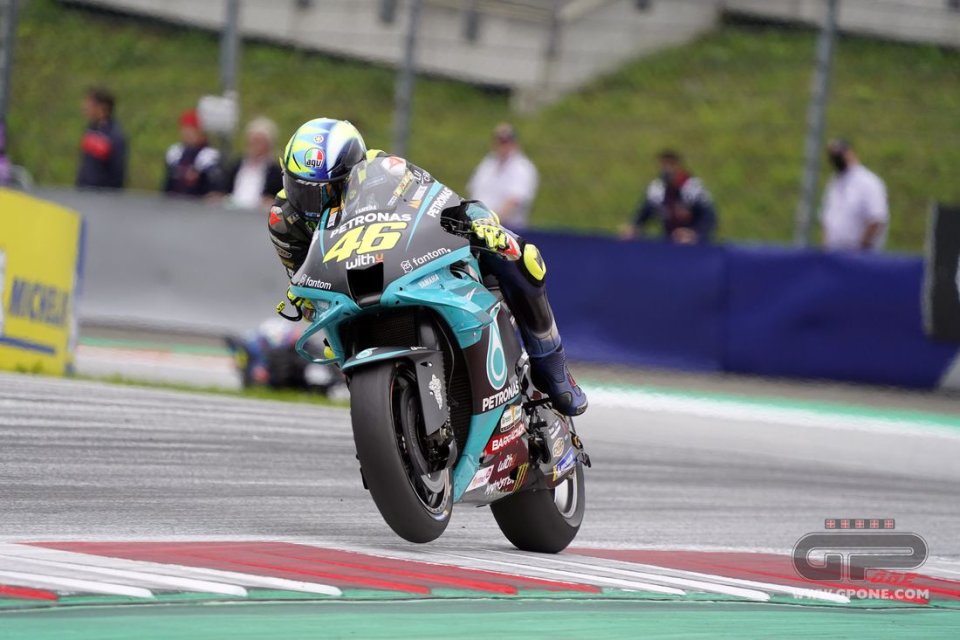 These days a 13th place is not a result that Valentino Rossi can be unhappy with, after a first part of the season in which he had to swallow a lot more disappointments. Not that the Doctor is over the moon about it, but maybe he has found something to build on from now on, especially in view of the second GP at the Red Bull Ring.

“In the end this race was not a disaster - he commented - I got some points and I reached the finish line. Unfortunately I lost some positions in the first few laps, then I had a good pace and was able to ride decently. I also did some good battles with the riders I was expecting, those with a similar pace to mine. We must also think that this is not the best track for Yamaha, we need top speed and acceleration, which we lack ”.

Why these difficulties at the start of the race?

"From the Sachsenring we have the device that lowers the front at the start, but to use it you need a different setting for the electronics and I don’t feel at ease with it yet. I always lose positions; we have improved a bit this weekend but not enough. The other problem is that at the start of the race everyone is very aggressive and, since the Yamaha is not very fast in a straight line, when you are in a group it is easy to lose positions on the straight. "

We’ll be back again in a few days’ time, what do you expect?

“As I said, today was not a disaster, I can't say I'm happy, but over the weekend we worked better to solve those problems that have plagued us since the beginning of the season. Something we have solved and next weekend I can be faster. This is a difficult track for Yamaha, my goal is to get a better start and score points. I would say that being in the top 10 is more or less my potential, realistically speaking ”.

But once again we’ll be racing at the Red Bull Ring, which even today showed some flaws in terms of safety.

"The accident between Pedrosa and Savadori could have happened on any other track. The problem is that in this circuit there are 3 or 4 wild braking sections and there, things get dangerous, also because they put stress on the brakes. Certainly the worst point is Turn 3, but what can we do? Go back to the old layout? It would be nice, but even more dangerous because there would be no run-off areas ”.

Did you have any problems with the brakes during the GP?

"I had them yesterday, I was really on the limit with the temperature of the front system. The Brembo technicians helped me, we changed the setup to help the brakes and today I didn't have any problems ”.

What was it like racing a race with Pedrosa?

“He made a great comeback. I was hoping to be able to stay with him but he was faster than me. He was very good; it is not so obvious that you are fast after three years away from GPs ”.

What can you say about Bezzecchi's victory?

“He needed it and he had a great race; I think it will give him a boost for the rest of the season. I am above all happy with the team's work, Vietti also had a great race, finishing ahead of Raul Fernandez. I hope that from now on the results of both can improve and I congratulate everyone ”.