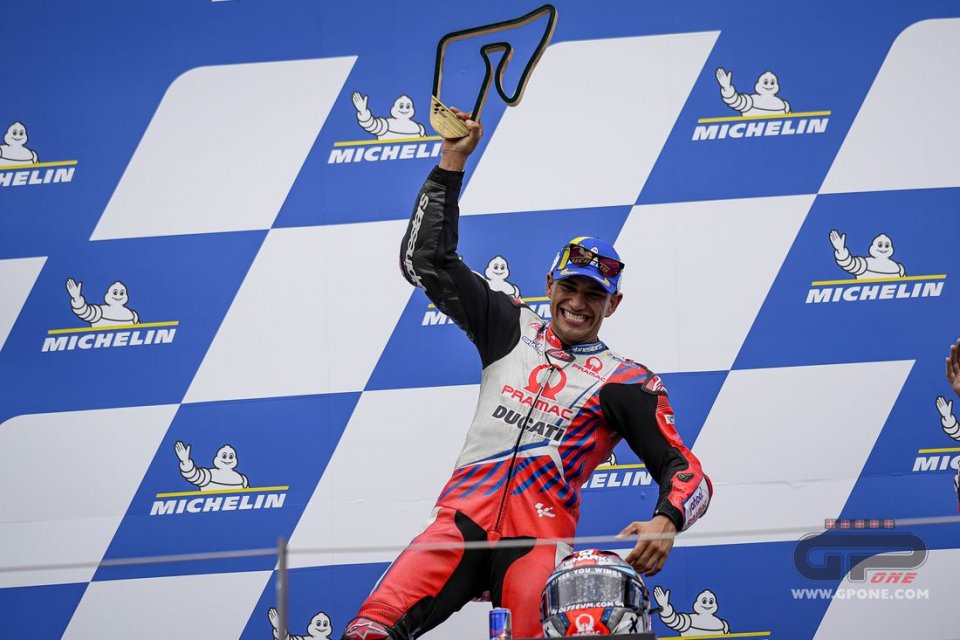 Winning in the sixth race in the MotoGP (or, rather, in the fifth and a half, considering that he pulled out in Barcelona due to his physical condition) is not something for everyone., butJorge Martin succeeded in riding the GP with the air of a consummate champion, controlling a mastiff like Joan Mir who pressed him until the last laps. When the Spanish rider crossed the finish line, the Pramac team exploded with joy, something that had been brooding for years, triggered by that long sought-after victory. Ironically, Martin seemed to be the calmest of all.

“If I had won at the last corner, I would have had another reaction, but then I had time to think about winning,” he said  smiling. “In the last few laps, it wasn’t easy. I promised my team that, if I made another podium this year, I would have bet on Punta Cana, so I was thinking about the sun and partying. I’ll definitely go with them in December.”

Winning a race in the MotoGP debut season is not something for everyone. Did you expect it?
“I felt super competitive yesterday, especially with worn tires. I didn’t have the same pace as Quartararo or Bagnaia, but I was close to them, and then I progressed in the right direction. In the first race, I had some problems with the front, but I changed tires and, in the second, it went better. I knew this was going to be a race where being consistent was going to be important, but Mir was very strong. When I saw that I had taken a small lead over Joan, I tried to give even more. I’m really happy for Ducati and for Pramac. I didn’t expect to win.”

How important is this success for you and your family?
“It’s impossible to repay my parents for what they’ve done for me. Before entering the Rookies Cup, we didn’t have money. When I was twelve, I risked giving up and, today, I won a MotoGP race. I really progressed. One more dream came true, but now I have the one to become champion. I have to keep this progression to succeed, to keep learning.”

Was not being at your best physically after the injury in Portimao condition you in the race?
“When there were fifteen laps to go, I felt physically ill. That was the worst moment. Joan was very close. Then, when I watched my lead increase a bit, it got better. I tried to be softer and more relaxed while riding, keeping my pace. I was able to manage the gap a bit.”

How much did you think about this victory?
“I thought a lot about how best to win. Maybe I had had the chance in Qatar. But, after the fall in Portimao, all my thoughts were on the two races on this track, because it’s the best of the year for Ducati. Like I said, I didn’t expect to succeed, but I did, and I’ll have another chance next weekend. I still have room to improve by one or two tenths.”

You also said your next dream is the title...
“I’ve only done six MotoGP races. I don’t want to think about next year, but I know there’s potential to do great things. You can never stop with the level that’s in the MotoGP, but Ducati works hard, and they’re in the right place for me and my riding style.”

Does winning with a satellite team have even greater significance?
“I’m the first rider to win for Pramac, and that’s something special, but I don’t feel like I’m on a satellite team. I have a factory bike, and there’s something new to test at almost every race. I feel incredibly good in the team and in Ducati. I’m in the best possible place for me.”

How did you manage the pressure during the race?
“I didn’t feel a lot of pressure today. It happened to me in the past, but I’ve matured. In the Moto2, I learned a lot. I knew that it’s difficult to leave on this track. I remember the races with Bezzecchi and Marini. I was able to maintain my concentration today. The one with Mir was, above all, a mental battle.”

The Austrian GP is coming up in a few days. What do you expect?
“Everyone will progress, and we’ll be closer. I want to be ready.”

This is the third consecutive race interrupted by a red flag at the Red Bull Ring. Is it a dangerous track?
“There are some critical points. One is definitely turn three. Normally, accidents happen there, and the exit is blind. I think that they’ll change the design and solve the problem in the future but, for the moment, we’ll have to do another race like this.”