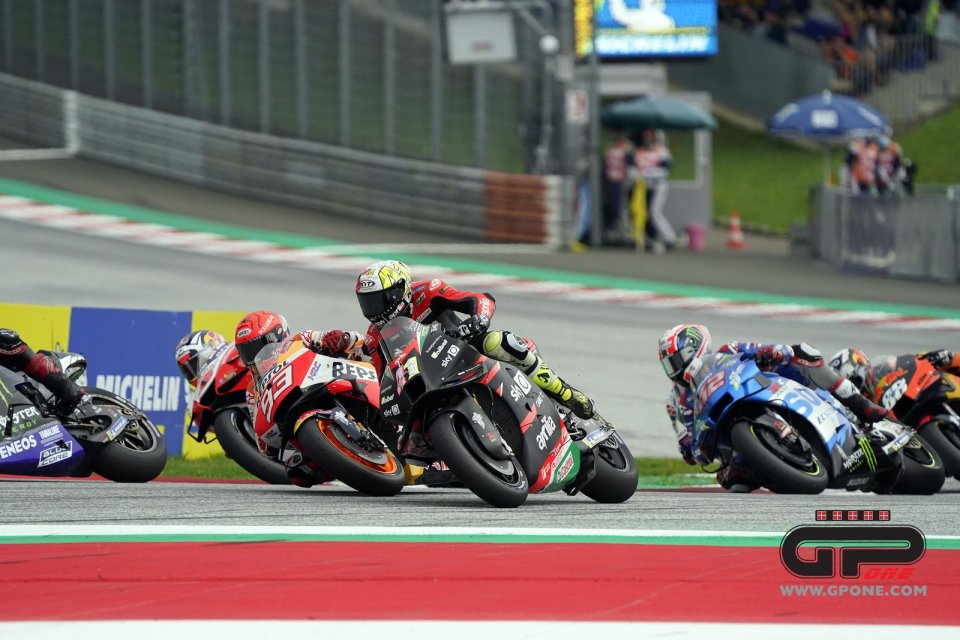 After a good first start, then interrupted by the accident involving Pedrosa and Savadori's bike, Marquez was unable to find the right confidence with his Honda and ended the race in eighth position, behind Alex Rins' Suzuki. He also had to suffer criticism from Aleix Espargarò for a contact in the frenetic phase of the start.

"These are things that happen, contacts in the race are frequent, especially after a start when you all get close at the corner entry - explained the 8-time world champion - It also happened to me with Mir, I simply thought that Aleix wouldn’t be able to keep the curve and when I saw the space, I went in. It was certainly an error of evaluation in the first start, I didn't expect such a strong contact. In the second start I think he made a mistake; I had already entered in the trajectory. "

In the first start before the red flag you seemed to have a very fast pace, then you lost it in the second start, what happened?

"In the first start the feeling was very good, I immediately started aggressive and the grip was good. After the red flag we obviously changed the tires and that feeling had evaporated, I no longer felt grip on the rear wheel. But I don't want to justify myself by blaming the tires, we all use the same compounds, it may be that different tires had an effect but I also finished wide so now we will have to look at the data and analyse what happened in view of the next race. "

One of your strengths has always been your ability to recover from an unfavourable starting position, what went wrong?

"Obviously I have not yet recovered my best form, I'm not angry but there is certainly some frustration. In qualifying we had a good pace and starting from eighth on the grid is not the best, but in the race we lapped more slowly than in the last few days, for sure the lack of grip on the rear certainly has a effect on both braking and acceleration, so now we will have to work on this aspect as well. "

Did you feel any pain during the race?

"I still have constant aches and pains in my shoulder, but now it is more a constant than sudden twinges, but surely that also affects my performance, I am not yet at one hundred percent of my potential".