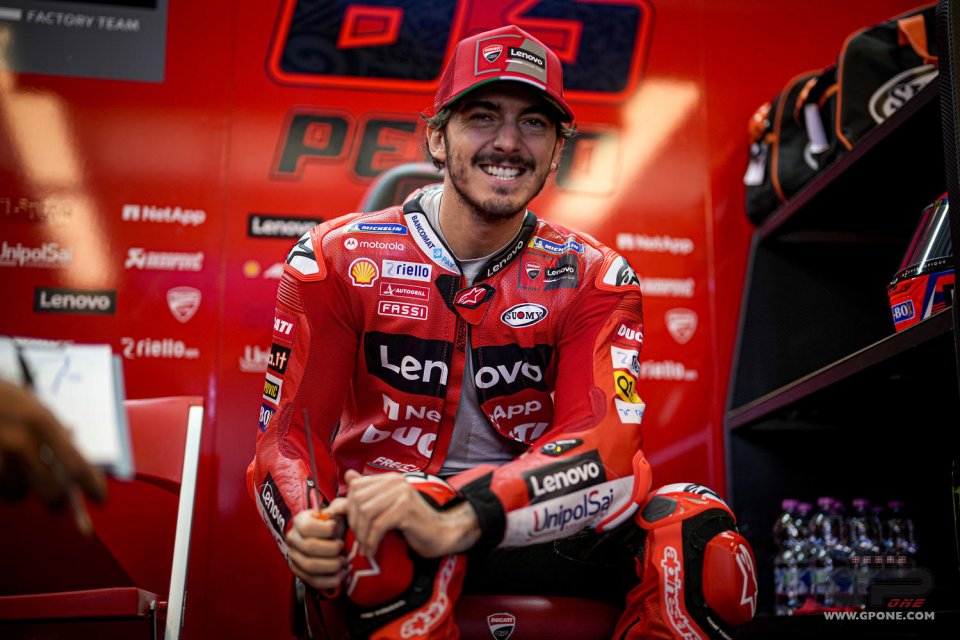 Pecco Bagnaia had said that he had potential to express on the Ducati on the friendly Red Bull Ring circuit. Second place on the grid today confirms how right the Italian was, and at this point he will have to manage the start of the race to get ahead of Fabio Quartararo, who on the flying lap was simply sublime.

The risk that the rain could shuffle the cards tomorrow in the race is very high but starting in front of everyone else is an advantage for Bagnaia, who must capitalize on the double-header in Austria to gain points on the rider who will start next to him tomorrow on the grid. Rain or not, tomorrow's round of the world championship must represent a turning point for Pecco’s championship hopes.

"In the last few races I have had a few too many problems - explained Bagnaia - and Assen was really tough for us at Ducati. In this period I have worked a lot to have the right mental approach and I think I have taken another step forward. Today I made other steps with the bike, yesterday I was not in a good shape. In FP4 I realized how much we had improved. Certainly this track is better for us than Assen, because here we can make good use of our braking and acceleration. Just look at the classification to see four Ducatis in the top six, this track is good for us. But tomorrow it could rain, it will be difficult in my opinion. "

Do you feel the pressure on you? Here you are the undisputed favourite for the win…

"The great thing is that everyone here told me that Ducati must win. They also said it in Qatar and Mugello, they told me I had to win there too. But I think that this year all the manufacturers are very close. In past years Ducati was much faster than its rivals. Now it's not like that, if we look at FP4 I think I'm the only Ducati rider in the top six for the top speed. I think things have changed; Ducati usually suffers in Jerez but this year we did a 1-2. The bikes are all close and even if we may have a small advantage on the straights, the others have the same advantages in the curvy section, as in the third sector here. I have a great chance of taking my first victory, but I don't think that it will be as easy as the fans imagine. "

Are all the problems in the third sector?

"The third sector is a point where I was very fast in Moto2. I'll look at Jorge's data tonight, because in that sector he turns the Ducati into Yamaha or Suzuki, he's very fast. We, on the other hand, have more difficulty entering the corners and closing the line. In FP4 I followed Marc Marquez, to see if he was fast and I saw that in some points he was able to create a gap with me of one or two tenths. I think that tomorrow both he and Mir are contenders for the victory plus Joan. But I also see Zarco, Fabio and Maverick. I think tomorrow there will be more than six riders capable of fighting for the win and it won't be easy. "

You spoke about progress made thanks to the work. What do you mean?

"I practically did not take a vacation. I started training on the Wednesday after Assen. At this time of the season I was not able to do one thing that I did well at the beginning of the year, that is to ride hard over the problems. In Assen I tried, but it was very difficult. Then I trained a lot with the Panigale V4s and I think I took a huge step forward in terms of concentration to stay fast and consistent even on used tires. I think we worked well in this break. I think when you know you have worked well, you arrive at the race weekend stronger and more ready ".

What did you think of Pedrosa's return to racing?

"I think everyone is happy for Pedrosa, happy to see him on the track. As a child I watched his races against Valentino, and he was one of the Fantastic Four. I am happy for this return, being so fast after three years is not easy, but I think that for a champion like him it is possible. He can be happy. "

Are you worried about the possibility of rain tomorrow?

"If it were to rain like in Assen in 2016, there would be a lot of problems. F1 was here two weeks ago in the wet, and we all saw how difficult it was to brake on wet asphalt. I don't know how difficult it can be to control the bike in extreme conditions here ".