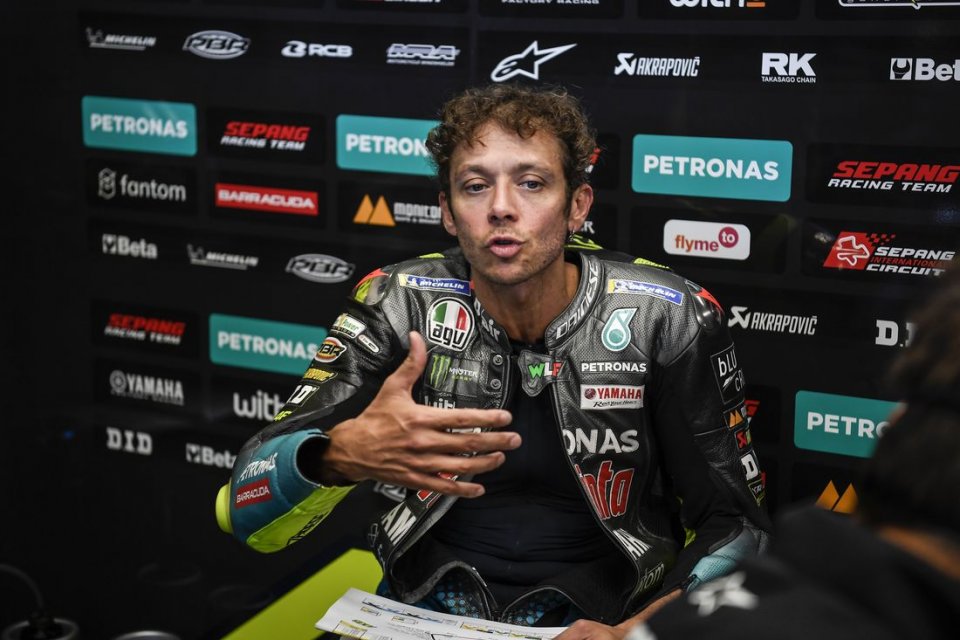 Yesterday was an important day for Valentino, when he announced that he would be retiring at the end of the season. A moment that comes sooner or later for every rider, but one that is certainly not easy to face. Rossi seems to have succeeded in the best possible way and he showed up smiling after the first day of free practice at the Red Bull Ring.

“It was a really exciting day for me, especially as I received so many messages from all parts of the world. I expected there would be a lot, but it was truly incredible - said the Doctor – Lots of sportsmen, footballers and F1 drivers wrote to me, but especially my old rivals, such as Stoner, Biaggi, Lorenzo, Dovi, it was really nice and it made me very happy ”.

His decision caught many in the paddock off guard, even people close to him, like his Academy riders.

“It's true, I hadn't told them anything - he confessed - even though we had talked about it for a long time. Above all, I had discussed it with Luca, Pecco and Migno, they pushed me to continue. When I then decided, I preferred not to tell my brother either, because it would have been difficult news to manage. One of the first people to know was Pol (the Petronas team press officer) because we wanted to organize something nice ".

"I took my mother by surprise, but the difficult thing was to convince Graziano"

His parents, Stefania and Graziano, were also taken aback…

“With my mum it was funny, because on Wednesday nights I always go to dinner with her, together with my girlfriend, but I didn't say anything to her. I only revealed it to her before leaving and at that point she didn't have the strength to answer me - he smiled - It was funny and after all I had already mentioned it to her, the difficult thing was with Graziano. In the last week he was constantly coming to my house to tell me to continue, but in the end, I managed to convince him and he is happy that I will be racing in cars".

The question about children is also inevitable, one that Rossi dodged with style: “I have always said that I would like to have one, but I would like to take a few months off without being a rider or a father” was his answer.

Then he will have to think about the future, between car races and the team in MotoGP. On the latter subject, all the doubts still remain to be clarified and everyone is waiting for a press conference announced by Tanal.

"I don't know much about this, I'm not the right man to ask - explained the Doctor - I'm a rider and I let things take their direction. As in the case of the choice between Ducati and Yamaha, it would not have been nice to take the M1s from the team I race for, so I watched things evolve and then I decided. But I can deny any intention to sell VR46 to the Saudis, we have never considered it because that is our world and we like it so much ".

"I would like to have Vinales in my team, but we did it for the Academy riders"

However, there are many things to ask about the new project and at one point there was also talk of the possibility of seeing Vinales on the VR46-branded Ducati.

"I would like to have him very much, because he is a top rider and we have always gotten along as teammates, there is a lot of respect between us - said Valentino - But we decided to make this team so that our riders from the Academy can race, this is our plan and our desire ”.

With so many questions about the future, we almost forgot that Rossi is still a rider…

“Today when I got on the bike, I felt more relaxed, but I know very well that you must always be focused because MotoGP bikes are very powerful and can be dangerous. Not to mention that I want to be more competitive in this second half of the season. Yesterday I wanted to let everyone know my decision, I had promised it, but I have about ten races left and I'm still a rider", he concluded.