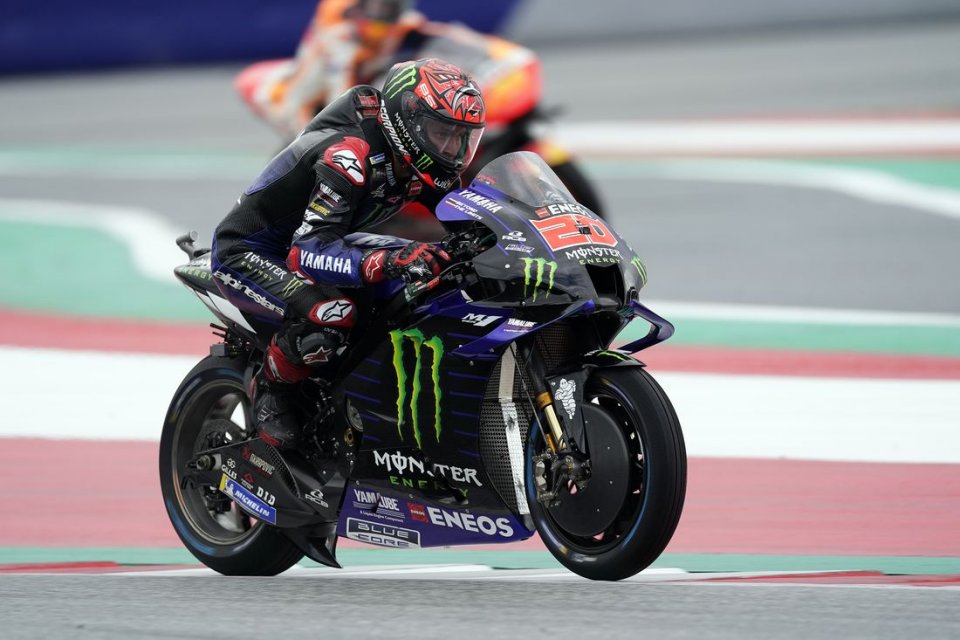 A few drops of rain were enough to ruin Fabio Quartararo's day and mood. The Frenchman knew that Yamaha would suffer at the Red Bull Ring, but the morning sensations had given him hope. "It had gone quite well – he commented on his eighth quickest time - Considering that I hadn't changed the tires at the end of the session and that after five long weeks of break it always takes some time to get your confidence back. However, the M1 went better than last year ”.

Then the bad weather hit the circuit and when Fabio came out of the pits in the afternoon on wet tires, everything had changed.

“I had no confidence - he admitted - All in all, when the track was completely wet, I wasn't among the best but it was still going well, but when it started to dry the situation got worse. It's really strange, I did a few laps with Pol Espargarò and Martin, I wasn't bad under braking and in the middle of the corner, but under acceleration it was a real disaster, because I didn't have any grip. FP2 was a nightmare ”.

Quartararo is convinced that the problem lies with the Yamaha…

"Experience has nothing to do with it, Valentino is the rider who has the most and he suffers the same problems as me - he underlined - In 2019, in my first year of MotoGP, I was always in the top 10 in the wet, even on tough tracks. such as Brno, Phillip Island, Motegi. I don't like rain very much, but I was among the first, so a solution needs to be found because there is a chance it will rain on Sunday. I am disappointed".

Also because in the wet a lot of riders proved to be fast, while Fabio did not go beyond fifteenth place.

“I didn't enjoy riding and when that happens it's not good - continued the Frenchman - I'm not that bad in those conditions, I was on the podium at Le Mans, but something has changed since last year. It is not normal to be so far from the leaders, Vinales is also struggling, even if a little less than me. I don't really know what to say, we need to understand what to do and carefully analyse the data collected today ”.

Stoner: "I loved 2-strokes. I retired because riding had become too easy...