TANAL Entertainment Sport & Media, the holding company owned by His Royal Highness Prince Abdulaziz bin Abdullah bin Saud bin AbdulAziz Al Saud, with the support of a number of Local institutions and representatives of local Saudi’s companies (as potential sponsors) will soon announce a press conference that will take place at His Royal Highness private Riyadh residence within the next few days.

During the conference TANAL will announce its involvement in several global major Motor sport projects for the next five years both in KSA and internationally. The company’s main field of action within the strategic framework of Saudi Vision 2030 will be focused on racing at the highest level, both motorcycles and cars in international competition.

The overall projects will also include a wide diversification of activities such as a ‘State of the Art' infrastructure which shall host a number of projects, from R&D of new innovative composite materials created for the new generation engines of the future, both for urban mobility and competitions. It will feature also a Motor sport theme park that will train young Saudi professionals in the automotive sector, including a racing teams which that will accelerate the transfer of skills and knowledge from various European countries, Italy and South Korea, but also a facility for the production of vehicles of the next generation. And with the presentation of the various activities, it will be illustrated how all this integrates with the development of the mega urban planning projects in KSA already planned in the VISION 2030 program.

Special emphasis will be given to the strategic joint project between TANAL Entertainment Sport & Media and VR46 in the MotoGP World Championship and Moto2 class, organized by Dorna Sports SL and an assessment of this exciting first sponsorship experience of 3 motorbikes in 2021 in both MotoGP and Moto2 classes, together with details regarding technical, logistic and communication and marketing aspects of the joint venture agreement set up with VR46 for the forthcoming 5 years, from 2022 and 2026, in the MotoGP World Championship MotoGP, Moto2 and Moto3 classes, including the Italian CIV.

The conference will also include an overview of the developments of TANAL projects which have already been recently introduced to the press regarding design and production of new vehicles, two and four-wheels vehicles, and of Fantastic Trophy, competitions to be held in KSA and Italy. Least but not last, the unveiling of the roles to be undertaken by the many departments in the International Exhibition and Research Centre (I.E.R.C) or “Extreme” which will become the headquarters of TANAL Entertainment Sport & Media. 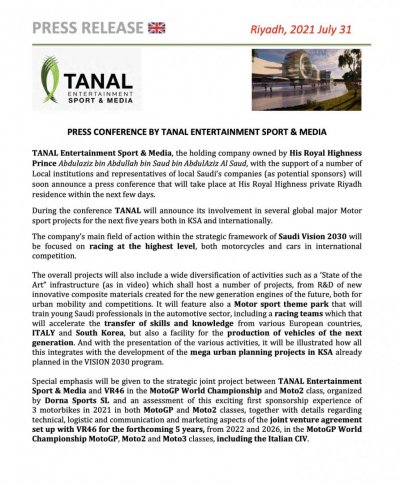 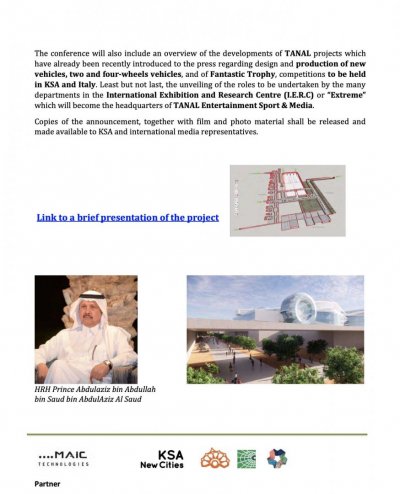 The Prince and Valentino: the golden sand of VR46