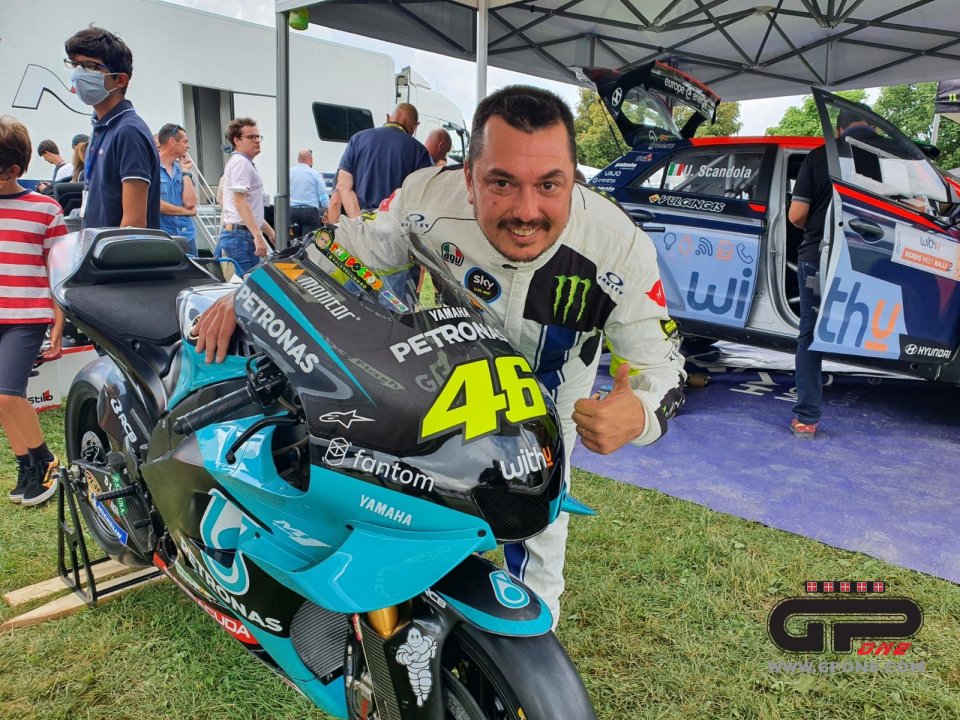 Alessio “Uccio” Salucci didn’t have much time to relax this summer. Even if the MotoGP was on vacation, the managers remained at work, and the VR46 has a lot on its plate. Starting with Morbidelli’s transfer (which now seems obvious) to the official Yamaha team in 2022, leading to  the debut of the new team in the MotoGP, without forgetting Valentino Rossi’s awaited decision.

We intercepted Uccio as soon as he got off a Rally Hyundai during the Riders Meet Rally event organized by WithU.

Do you want to take the place of some Academy  rider?

“They do twice as much as I do,” he said laughing. “Thanks to WithU, they invited me to this event, and I have the chance to try a real racing car, an R5, and I like it a lot, even going slow. It’s  fun.”

Were you able to take a vacation? Because there’s been a lot of talk about the VR46 in the past few weeks. The latest news comes from Razali who stated that Petronas has given Morbidelli the go-ahead to join the official Yamaha team in 2022.

“We’re talking a lot about it with Yamaha, and we’re quite advanced in the discussions. I think it’s  a natural passage for Franco. He  had some technical and physical problems this year, but he proved to be one of the four or five strongest riders in the MotoGP last season. In my opinion, it’s normal for Yamaha to put him in the factory team now that Maverick has decided to change. I’m really happy for him. If that happens, we’ll have two Academy riders in official teams, Franco and Pecco, and it’s a crazy goal. Five years ago, they were children, and now they sign contracts of this caliber. It means they deserve it.”

Then there’s the VR46 team that will enter the MotoGP in 2022. There have been many doubts recently about the presence of Aramco on the fairings. What can you tell us about that?

Uccio: “Ducati, Aramaco? The sponsor on the fairing can change every three races.”

“Many things have been said. We’re clear about the situation, and we’re already working on building the actual team, from hospitality down. We’re already ahead with the work, and I can’t wait to see our Ducatis on the track.”

So is the title sponsor, Aramco, confirmed?

“We have a contract with Tanal, the holding company of the Saudi prince, and he – who owns Aramco, like other companies – will be the one to decide. Our contract provides that the sponsor on the fairing can change, even after every three races. It’s at their discretion. We spoke again this morning, and we’re defining the graphics for the start of the season.”

Let’s talk about the riders. Luca Marini is one, even if he still doesn’t have an official status. But the other? The prince expressed his desire to see Rossi on the team.

Uccio: “Luca Marini will be one rider... we’re deciding the other... he’s deciding”

“Denying it is useless. One rider will be Luca, in my opinion.” He laughed. “We’re deciding on the other. He’s deciding. Whatever choice Vale makes will be the right one. So we have to wait another couple of weeks to figure out who’ll be the second rider on our team.”

What did you think of Valentino during this vacation break?

“We were on vacation for a couple of weeks, and everyone needed that. Vale, like me, and the whole entourage. He came really wound up and started training both in the gym and on the bike. I saw he was really fast on the bike, both on the MiniGP and at the Ranch, and he’s on the track again today. Whatever his choice is for the future, there’s a season to honor. If he’s the one to ended his career, he doesn’t want to do it the way he’s doing it now. We know we don’t have the potential to win races, but we don’t have the potential to finish fifteenth. We have great support from Yamaha, the team, and we want to try to do these ten races that are left at top of our level, which is not this.”

There’s also a lot of talk about Bezzecchi in the MotoGP next year, on your team, or even in Petronas.

Uccio: “Everyone wants Bezzecchi, both in the Moto2 and in the MotoGP”

“Everyone wants Bez. Eighty percent the Moto2 teams called me, and there are also requests from the MotoGP. I know that Petronas wants him. We’ve talked many times with Stigefelt. We’ll talk about it in Austria, and we’ll see what we can do.”

Is the Moto2 project confirmed?

“Yes, for the next five years. It’s preparatory for the MotoGP. Vietti already has a signed contract, and we need to understand who’ll be the second rider among our Academy guys.”