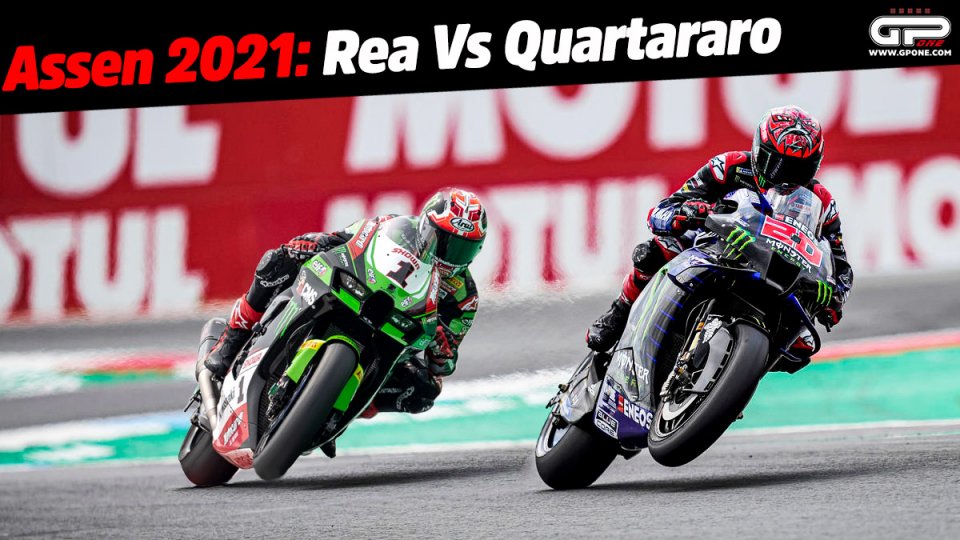 The comparison between prototypes and production-based machinery has always divided and inflamed their respective "supporters". Looking at the two calendars, to date, for both championships the last race was the one on the (former) Cathedral. What better occasion to try to make a comparison between the two categories on the same circuit and with the same weather conditions?

280/300 horsepower for 157 kg against 230/250 horsepower for 168 kg: these cold numbers characterize the prototypes and production-based bikes respectively. Added to this are the carbon brakes, seamless gearbox and a thousand other bits of “devilry” permitted in MotoGP and which SBK cannot have. On the other hand, the suspension and electronics, also according to the riders who raced in both categories, are very similar. Tyre chapter: Michelin prototypes for the MotoGP bikes and Pirelli with a road spirit but with very high performance for the production-based bikes. Well, with these assumptions the comparison would seem (and in part it is) impossible. In fact, the double Dutch appointment (early July for MotoGP, late July for SBK) produces some interesting talking-points.

The question that fans often ask themselves is: in a hypothetical race together, how far behind Quartararo would Rea have been? And where would he have been classified in the race? But not only that! There was a rider who raced in both categories in 2 weeks: we are talking about the 25-year-old American Garrett Gerloff. Judicious in his MotoGP race debut, responsible for a total disaster in race 2 SBK. Well: did he go faster with “his” R1 or with Morbidelli's M1 2019?

Let's crunch some numbers. In the graph below the comparison between the two respective winners: Rea and Quartararo. For the former, race 2 is considered, as it is an entire race. The confrontation ends on lap 21, given the shorter duration of the SBK race compared to the MotoGP one. The curve indicates the gap between the two cumulative race times, where the positive numbers indicate that Quartararo is obviously faster than the Northern Irish champion who would have finished behind by about 40 seconds. However, it should be mentioned that Rea, in the first laps of race 2 (the one considered in the graph), found himself having to get back up from 5th/6th position due to the contact between Gerloff and Razgatlioglu while Quartararo always had a free track. Despite this, his average gap in the first 10 laps is around a second and a half. Then, the greater grip of the Michelin tyres over the distance (Pirelli has always shown a more marked drop from the middle of the race onwards), means that the average gap over the entire race is just under 2 seconds per lap.

The other question is: would Rea have finished last? The answer is absolutely no! In the following graph, the comparison with the final finisher, namely Luca Marini. Well, Johnny in a hypothetical race together would have finished ahead of him by over 10 seconds. Also in this case, it seems that over the distance the average gap is reduced. While in the first 10 laps Valentino's younger brother picked up a gap of about 7 tenths per lap, in the total of 21 laps (considering the duration of the SBK race), the average gap is just under half a second.

The other interesting comparison sees the American Gerloff as protagonist who, called in to replace Morbidelli on the 2019 M1, finally made his debut in MotoGP (remember that in Valencia, in 2020, he replaced Rossi struggling with the events of COVID, only for the Friday sessions, among other things in the wet). Garrett said that having raced a few days earlier in MotoGP was more of a disadvantage than an advantage, given the two different riding styles required. The American admitted that he is more at ease on the bumps on the R1 than its big sister M1, which is predictable given the greater stiffness of the latter. As for performance, race 1 is shown in the graph below (shortened by 2 laps due to Folger's accident). The performance, however, is affected by the fact that Gerloff started last due to a crash in Superpole. The American then produced a good comeback but clearly if he had started further ahead, the result would have been different. On the other hand, in MotoGP he produced a regular race, lapping on average in 35 low/34 high, with some "wonky" laps in 36/37. In a hypothetical race with himself he would have come forward with the M1 by about 4 seconds, all gained in the final laps as, up to lap 13, the times were practically identical.

Ultimately, the comparison between the "two worlds" is as difficult as always, but if we consider the design, development and production costs of a MotoGP bike compared to that of a Superbike, the balance clearly tends in favour of prototypes. As can be seen from the comparison between the two most in form riders of the two respective championships (Rea and Quartararo), the prototypes allow you to gain less than 2s per lap on a track like Assen but, with a valid rider, an SBK rider would not look out of place in the lower part of the MotoGP ranking. The other interesting point is that MotoGP probably requires a more in-depth knowledge of the vehicle, as demonstrated by Gerloff, only marginally faster with the M1 than "his" R1.