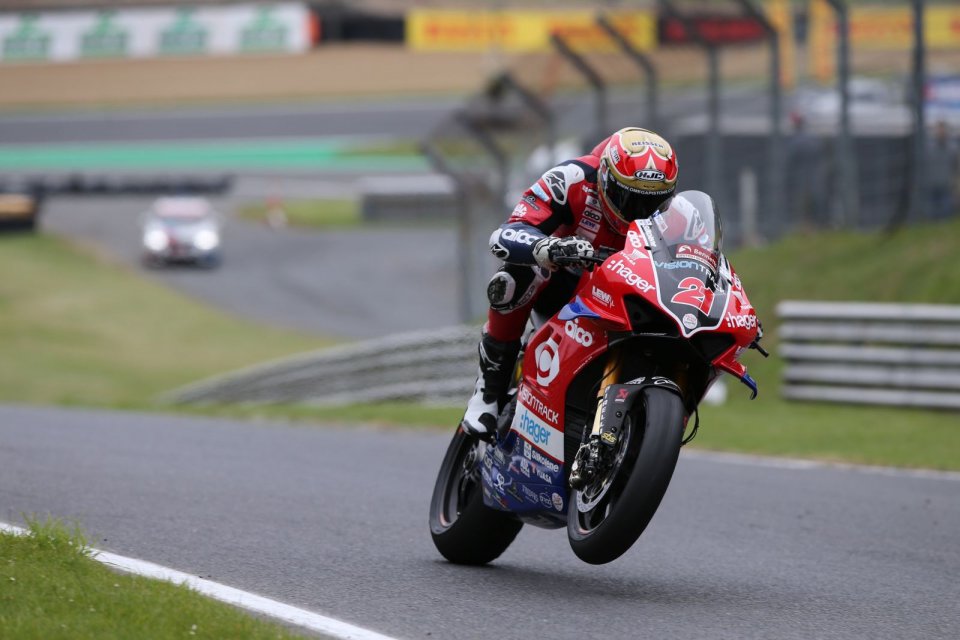 There was everything but the kitchen sink in the final crazy BSB race on the ups and downs of the glorious Brands Hatch track. At first a sudden shower of rain and then a red flag thanks to the engine of Gino Rea's “Gixxer” giving up the ghost in the middle of the Brabham Straight, all contributed to making Race 3 a particularly electrifying affair, and one that was drastically reduced to seven laps. Amidst all the chaos emerged Christian Iddon, who grabbed the win and the championship lead, and who took the Borgo Panigale machine back to the top of the podium at the end of a hard-fought four-way battle that was resolved only in the last few meters by just 75 thousandths between him and Tarran Mackenzie.

Initially, the third BSB race took place in the typical British half-dry/half-wet conditions where the choice of tires made the difference. There were those riders who opted for the specific intermediate rear Pirelli, those who dared to use slicks, but right from the start it was Josh Brookes who made his move. Rocketing from the 16th grid slot to first place in a few corners, the result of a pair of rain tyres, the reigning Champion powered ahead like in the good old days (demonstrating that on slippery surfaces the grip problems are less prominent) only to be overtaken by the faster rider Danny Buchan (rain-intermediate) and teammate Iddon (intermediate-slick). The latter then made his move on the SYNETIQ BMW by TAS man with a series of fast laps in parallel as the line dried out. Nonetheless, on lap 12 of 20, race direction was forced to display the red flag because of the oil left on the main straight by Rea's GSX-R 1000, nullifying what had taken place up to that moment.

Shortened to seven laps (an authentic "sprint race"), with the track now completely dry, all the riders lined up with slicks, giving life to a somewhat hard-fought and exciting race in pure BSB style. The no holds barred fight for victory soon boiled down to the quartet of Iddon, Mackenzie, O’Halloran and Buchan. At the finish line, the VisionTrack PBM Ducati man was ahead of the Scot by a handful of thousandths, taking the points lead with his second win in 2021, the third in his career. The McAMS Yamaha rider had some consolation as "King of Brands", a prize reserved for the rider who scored the most points over the three days, while team-mate Jason O'Halloran (- 6 from Iddon) completed the podium.

At times in the lead, Buchan saw his dreams of glory fade in the space of a single lap, and he finished fourth. Fifth place finally went to Brookes, in his best position of the season, favoured in all probability by the short length of the race. Sixth was Glenn Irwin (Honda Racing UK), while the top-10 was completed by Peter Hickman (FHO Racing BMW), the two Ninja ZX-10RRs of Lee Jackson and Rory Skinner, and Danny Kent (Buildbase Suzuki). BSB doesn’t stop however and, next week, it is the turn of the fast Thruxton track for the fourth round of the season. 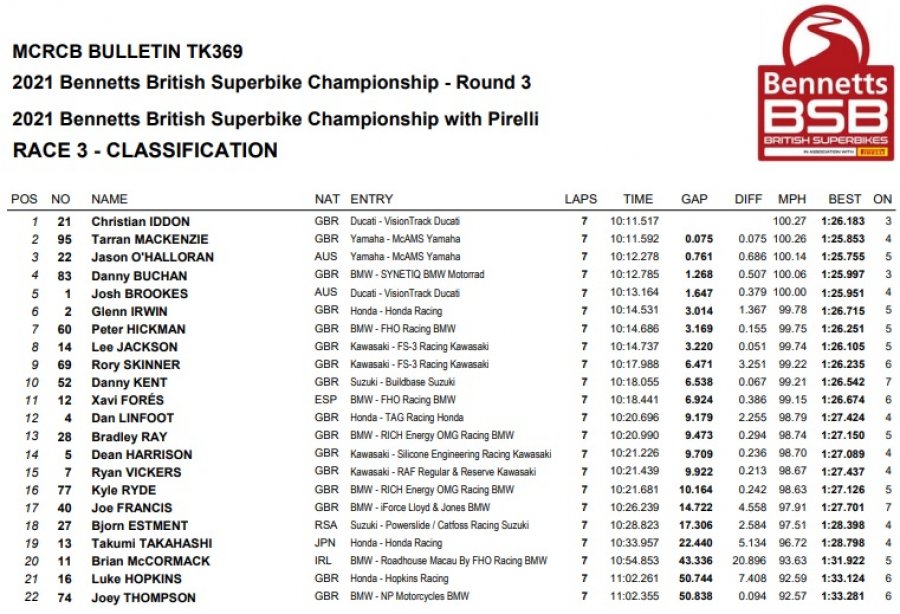