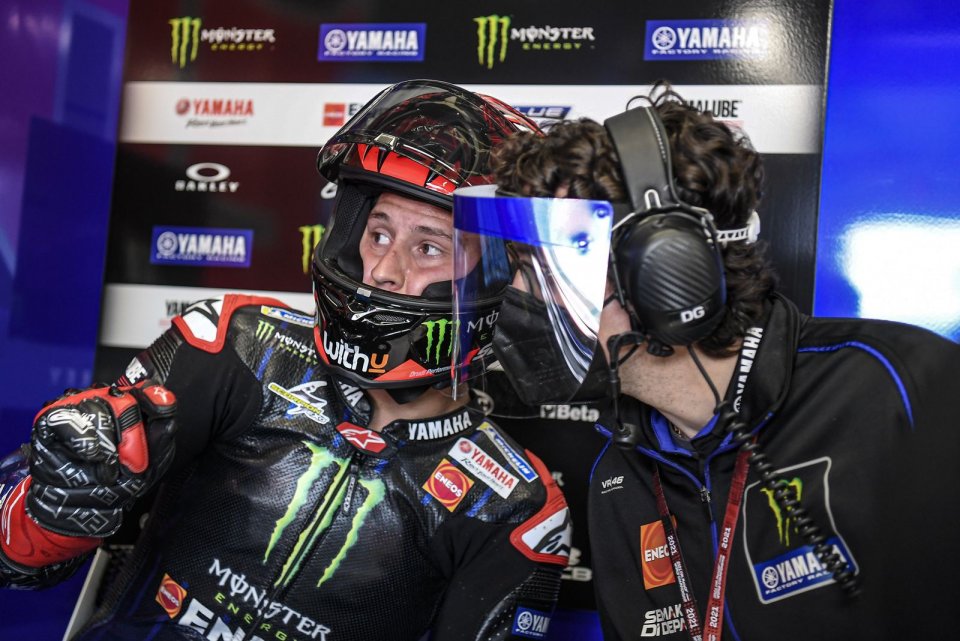 When Fabio Quartararo lines up again at the start of the Styrian GP he will do so with an advantage of 34 points over Zarco and 47 over Bagnaia. A nice cushion, after four victories, on which to build his first world title.

In 2020, he also started the season in a great way, only to finish the championship in eighth position, 44 points behind Mir. This year, however, the French rider seems more mature, as well as faster, but his crew chief Diego Gubellini denies that the drop in performance last year was caused by the pressure.

“The biggest problem was actually technical - Gubellini explained to motorsportmagazine.com - Last year Fabio was very good on some tracks, but on others he had a lot of difficulty. Even though the 2020 bike looked very similar to the 2019 one from the outside, a lot of parts were different, so even the feeling was far from that of 2019 ".

Gubellini also explained the difference between the style of Jorge Lorenzo and that of Quartararo, as the two have often been compared.

"Lorenzo was very fluid in his riding style and very fast in corners. This worked very well with the Yamaha, especially with the Bridgestone tires. Fabio is similar there because he can maintain high cornering speed, but his style is different and typical of Fabio and the new generation of riders is that they play around a lot with the body and balance, they shift the weight a lot to better manage the braking and acceleration phases. Lorenzo moved a lot on the bike, but sideways - left and right - because his goal was to increase cornering speed. Fabio moves a little less in this sense, but a lot more forward and backward. "

Balancing the weight in this way decreases the loss of grip under acceleration and the tendency of the bike to wheelie and contributes to less stress on the tires. In this sense, Gubellini says that Fabio is closer to Marquez than to Lorenzo. Sometimes he brakes with the bike still upright, sometimes late in the curve, sometimes it's a mixture of both.

"The braking phase is one of Fabio's strengths - confirmed Gubellini - The best thing is that while many riders are strong on the brakes or cornering speed, Fabio can do both at the same time. Or if he doesn't find his speed in the braking phase, it is thanks to the speed of the curve or vice versa. This is very important and helps him to be strong on different tracks and in different conditions ".

For this reason, the rider and crew chief tend to make few changes to the set-up at the weekend, leaving the bike almost identical between one track and another, because only in this way can the rider gain confidence in the reactions.

"We try to work in different areas such as electronics tuning. The key is also, especially with the Michelins, to have the tires work in the right area. If we can't solve a problem through the electronics or the tires, then we think about the set-up. It's very different from the past, but that's how we prefer to work. "