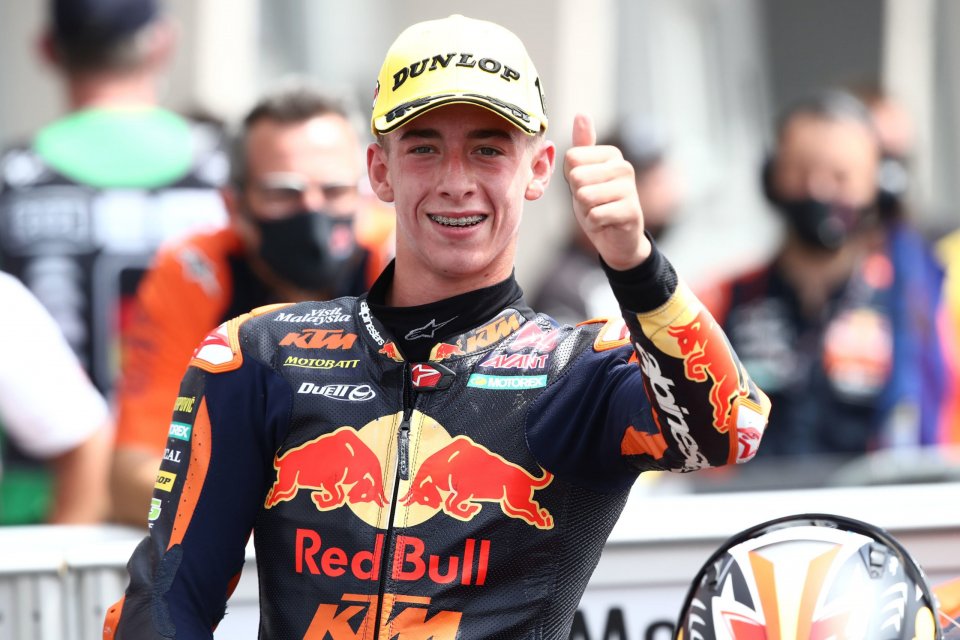 On March 26th of this year, Pedro Acosta made his debut in the Moto3 World Championship. Four months later, the Spanish rider has already accumulated 4 victories and a further podium, and is the leader of the overall standings. The Red Bull KTM Ajo rookie looks back on the first half of the year and reveals the keys to his rapid adaptation to the class, as well as indicating his objectives for the remainder of the season.

How do you assess the first half of the 2021 season?
“For my debut season in the World Championship, it has been very positive. We have worked well in this first part of the year and both the team, and I are happy and satisfied with how things have turned out at the first nine races."

What has been the best moment for you so far?
“For me, the races in the Netherlands and Germany have been the most positive in the first half of the year. We came into them off two rounds in which our feeling wasn't the best, but when I got to the Sachsenring I felt strong again - both in practice and in the race, which we ended up winning. At Assen we suffered a big crash in practice, but on Sunday we were at the front. I think that these last few Grands Prix before the summer break have been the ones in which we have worked the best."

What has been the key to adapting with astonishing speed?
“The key has been hard work and the help that the team have given me. Without them, I would not have been able to achieve the results that I have. All the people who are inside the garage are important and each one of them has an essential function. The sum of all of them allows us to get out on track and achieve results."

How has your lifestyle changed in terms of training, your daily routine, etc, since you became a World Championship rider?
“All my routines have become a bit more professional. I spend many hours training on a motorcycle, as I consider it to be a fundamental part of rider preparation. Fitness is also an important aspect and, before the Grand Prix of Qatar, I started to take care of myself much more in this regard. In the end, I was already doing all this before, but what has changed has been the intensity and the time I dedicate to each of these things."

Acosta: "If I had to change anything, it would be our way of approaching the qualifying practices."

How has your adaptation to the team and its working philosophy been?
“I have adapted very well to both the team and their habits. In the past, we already had a work plan that requires us to be responsible, so it was not a big change for me. I believe that I have understood the philosophy of the team well, as well, just like they have understood my way of riding. From Montmelo onwards, we modified our routines a bit, and that was even better for us. We also started to be competitive in practice, looking to always be at the front."

What would you like to improve after the summer break?
“If I had to change anything, it would be our way of approaching qualifying. At these last few rounds we have concentrated on doing our job, on finding a good pace, and it has not gone badly for us. For this reason, for the second half of the year I would like to continue with the work plan that we carried out at the last two races, in Germany and the Netherlands."

What is the goal for the remainder of the season?
“The goal is still to have fun. There have only been two races in which I set goals for myself, and they were Mugello and Montmelo - where I made several mistakes in the contest. That is why I want to continue to enjoy myself every time I go out on track, since that is how things work out best."

How are you going to spend the five-week summer break?
“It is important to rest at least a week - or week and a half - from training and our routines. The body recovers quickly, but the head needs to clear and refresh from time to time to continue giving 100 percent. However, before the first race back in Austria, I would like to return to Barcelona to train with my teammates. In general, I think that this rest period will be good for us to face the second half of the season strongly."