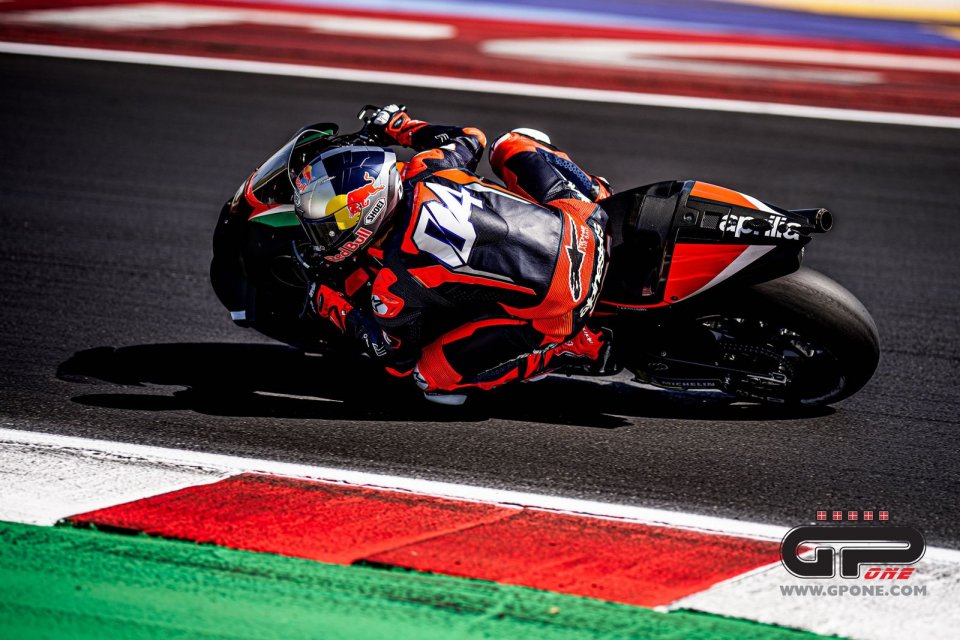 Andrea Dovizioso's summer is all set to be very busy because he seems to have taken up his role as tester for Aprilia very seriously. After a first contact with the RS-GP in Jerez in April, a two days at Mugello ruined by the rain and finally a test at Misano at the end of June, July and August will see Dovi again on the Noale bike.

The first dates to be marked on the calendar are those of 27 and 28 July, when Andrea will be in Aragon, then in August two more tests await him in Misano: the first from 5 to 6, while the second will start on 31 August and end on 1 September. An important program, like a true test rider, for an experience that was born out of curiosity and since then has turned into something more demanding.

After all, this solution makes both parties happy. For Dovizioso, who has taken a break from his role as a racer (at least on the track, because he is involved in motocross), it means staying 'in the loop’ and keeping in shape. There is no need to mention that a MotoGP bike is something unique and being able to use it regularly is important for any rider. Furthermore, Andrea has always been very technical and curious and being able to give his advice for the development of the RS-GP is undoubtedly something he likes and keeps him motivated.

On the other hand, Aprilia managed to solve a situation that seemed very complicated in the best possible way. In fact, in Noale they found themselves without a test team, a serious lack nowadays. With Savadori becoming a full-time rider and the relationship with Smith coming to an end, there weren't many cards left to play, but the one that can solve the problem has arrived. Dovizioso is one of the ideal testers for experience and ability, having him (as is happening now) riding the RS-GP continuously can only be a godsend for the Veneto engineers. This does not mean that the improvements of the bike this year were thanks to him, but his contribution for future developments might be essential to take that further step that is still missing.

What is still unknown is whether or not all this testing program will lead to something more in the future. Given the three tests in the space of two months in Misano, the first thought is to see Dovi as a wild-card in the San Marino GP, a home appearance that all the fans would certainly like.

Then, there is 2022 to think about. Andrea would like to go back to racing, but only on condition that he finds a project that fully satisfies him. In this sense, with the place left free by Vinales in the official Yamaha team, a tempting possibility has come about, but it doesn't necessarily mean it will happen. So, Dovi might decide to follow in the footsteps of Pedrosa, just to name one rider, and take on the role of tester for Aprilia. For Noale it would be an ideal situation if they could also sign up Vinales as a regular rider. Andrea as tester (assisted by Savadori) and Aleix and Maverick riders would be a line-up that not even the most optimistic of observers would have dared to imagine. Maybe the reality will surpass fantasy, but for this we will still have to wait. Not even the managers will have much time for holidays this summer…