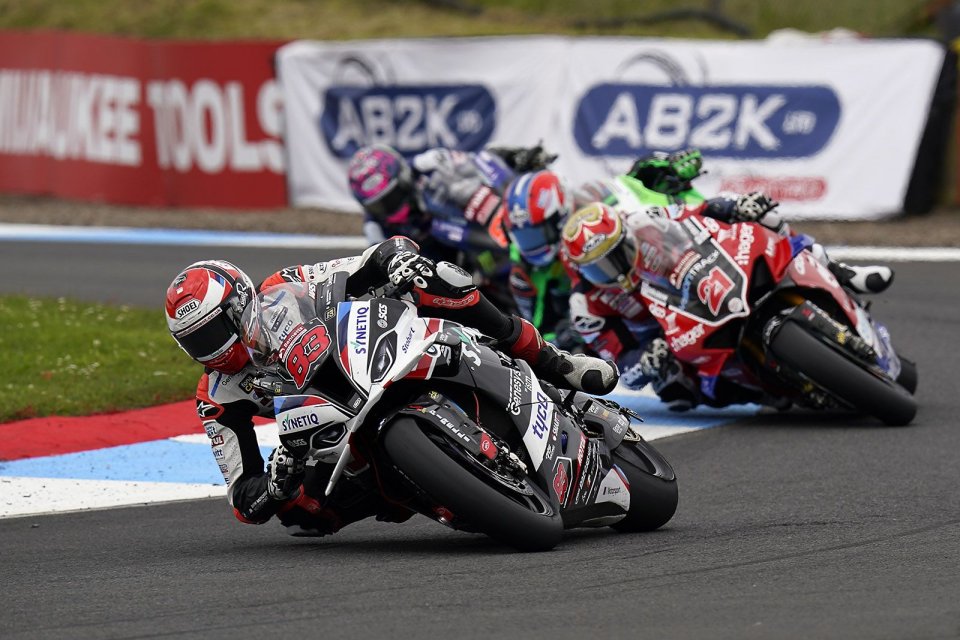 British Superbike is not for the faint of heart and, on a track historically inclined to spectacle like Knockhill, there was an exciting Race 3. Coming to an early end due to a harmless crash by Glenn Irwin, the final outcome again went the way of Danny Buchan, fourth win in his career, and the new M1000RR, again with the same multi-brand top-3 of Race 2 (BMW-Kawasaki-Yamaha). Unlike the previous race, the pair in question had to sweat it out more than expected thanks to a wild Rory Skinner, who missed out right at the very end.

The SYNETIQ BMW by TAS Racing rider did not have an easy time of things. Despite starting from the front row, he got bottled in, losing some positions. He even risked contact with his brand-mate Hickman in the initial phases, but as the laps went by he managed to get close to the leader, passing  them one after another: first Iddon after a spectacular exchange of passes, then it was the turn of youngster Skinner at the entrance of Clark's on lap 24, just a few moments before the red flag, which came about after Irwin's CBR 1000 RR-R which remained in the middle of the track at Scotsman. It was a determined and clean win (as well as lucky. ..) for Philip Neill's team, which had not scored a double since Brands Hatch 2013 and propels him fully into the title race.

Starting from pole position thanks to his fastest lap in Race 2, the rider-class of 2001 had high hopes of taking the win. Moving into the lead at the end of lap 1, the FS-3 Racing Kawasaki man led the race flawlessly, sometimes more than a second ahead of his immediate pursuers. However, in the final stages he was unable to counter the power of Buchan. Side note: the classification was based on the end of lap 24, so just a few meters separated him from victory. It was a bitter finale for the 19 year old, who had some consolation with his second podium ever in his sixth appearance in the top class.

Again in third place was the other local idol Tarran Mackenzie (McAMS Yamaha), while the championship leader Christian Iddon (VisionTrack PBM Ducati) had to settle for fourth, extending his advantage to +6 over Jason O'Halloran (McAMS Yamaha), only sixth after a DNF in Race 2. However, the Australian can take comfort in the fact that the Ducati rider did not take home any Podium Credits useful for the Showdown.

In fifth position Bradley Ray (OMG Racing BMW), seventh Tommy Bridewell (Oxford Racing MotoRapido Ducati), ahead of Peter Hickman (FHO Racing BMW) and the two Ninja ZX-10RR of Ryan Vickers (RAF Regular & Reserve) and Lee Jackson ( FS-3 Racing). The reigning champion Josh Brookes (VisionTrack PBM Ducati) was even further behind in 13th and more than 13 seconds off the top. Something is definitely not working, the Australian must hope that the friendly environment of Brands Hatch, next round on 23-25 ​​July, can help him get back on track. 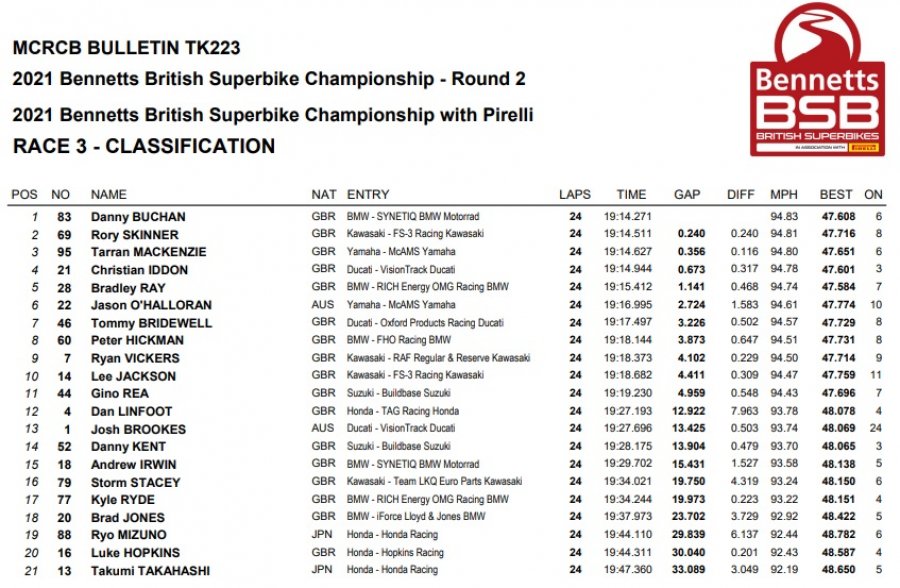