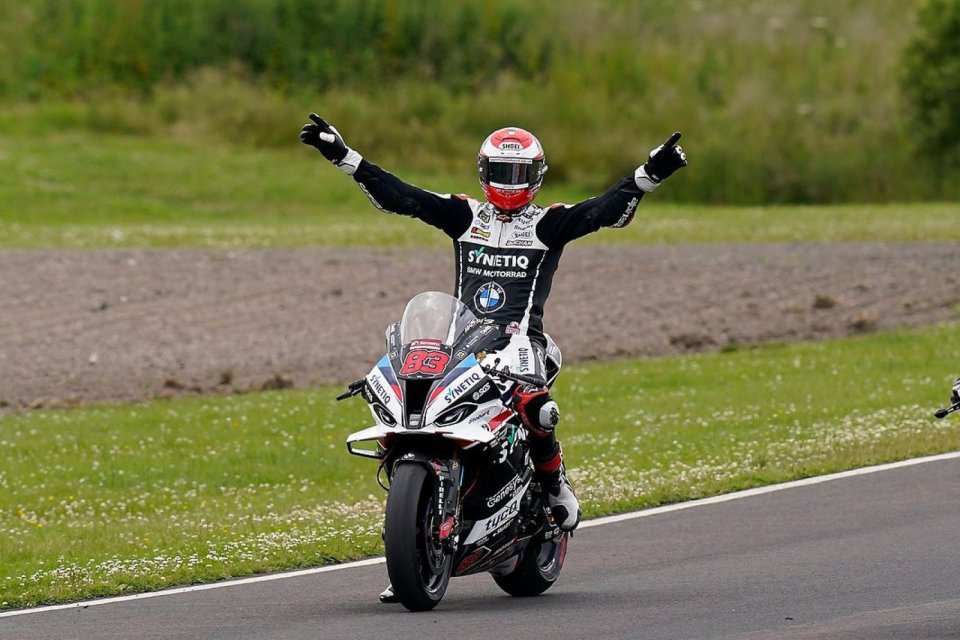 Considered until last year the great unfulfilled promise of BSB, the Munich manufacturer has (finally) overturned all expectations with its brand new model, updated from every point of view. A dream within a dream, so much so that Race 2 on the short Knockhill track gave the M1000RR its first win  thanks to Danny Buchan. In 30 laps the surprises and excitement were certainly not lacking, starting with a podium for rookie Rory Skinner, with another multi-brand top-3 (BMW-Kawasaki-Yamaha) and the dramatic crash of the now ex-championship leader Jason O'Halloran.

The return of Buchan

Somewhat overshadowed in the recent past, after joining SYNETIQ BMW by TAS Racing in the winter, the Essex man is now experiencing a second youth in Scotland. On a track where he scored his first career win in 2019, he put into place an almost perfect strategy: once he had let Iddon run his course, he broke the ice on lap 17 by passing him at Taylor's Hairpin, and then defended the position on the short pit straight. From that moment on, there was no more story and Buchan was able to pull out a lead and cross the line with a reassuring margin of one second over his rivals. His  third win in BSB also represents a breakthrough for Philip Neil’s team, which has been aiming for a win since Thruxton 2016, an eternity ...

Scottish party, but what a fight!

With the leading group at times made up of six riders, the local heroes did the honours: in a no holds barred battle, Rory Skinner and Tarran Mackenzie managed to get the better of Race 1 winner Christian Iddon. Making his debut in the UK’s domestic series, FS-3 Racing’s 2001-born rider (!!) took his Ninja ZX-10RR to second place, securing his first podium in BSB (as well as for the latest-gen Kawasaki) and pole position for Race 3 after setting fastest lap. The McAMS Yamaha man, for his part, overtook the Ducati rider on the final lap to finish third.

Iddon into the lead

Behind the leading trio was Christian Iddon (VisionTrack PBM Ducati). Fourth place is not the same as yesterday afternoon, but it can be some consolation considering Jason O'Halloran's (McAMS Yamaha) crash at Scotsman on lap 11: a huge mistake while trying to recover from ninth place, and he is now 3 points down in the classification. Tommy Bridewell (Oxford Racing MotoRapido Ducati) made it up to fifth place, ahead of Ryan Vickers (RAF Regular & Reserve) and Peter Hickman (FHO Racing BMW), who went into the gravel trap in the final stages. Eighth was Lee Jackson (FS-3 Racing Kawasaki), then Bradley Ray (OMG Racing BMW) and Gino Rea (Buildbase Suzuki) completing the top-10. The difficulties continue for Glenn Irwin (Honda Racing UK) and reigning champion Josh Brookes (VisionTrack PBM Ducati), 11th and 12th respectively, more than 12 seconds from the top. 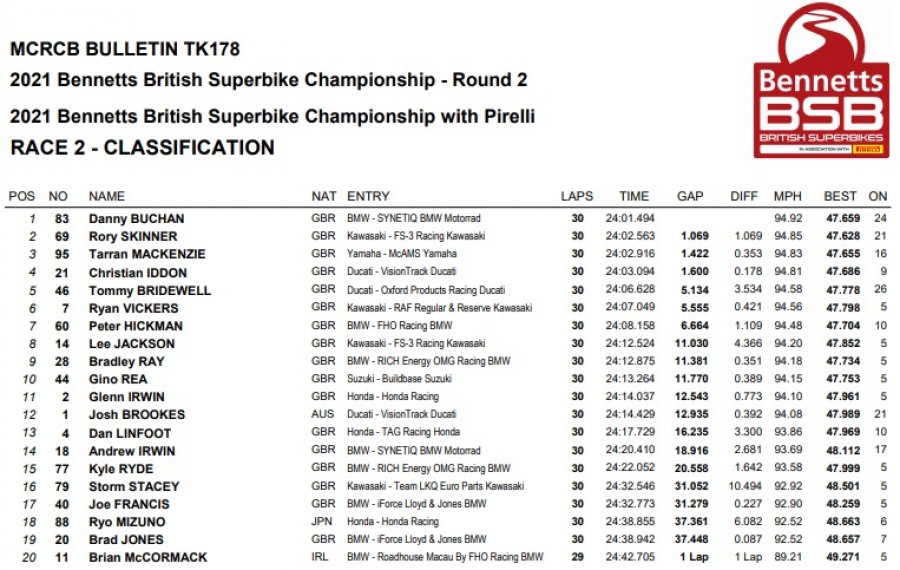