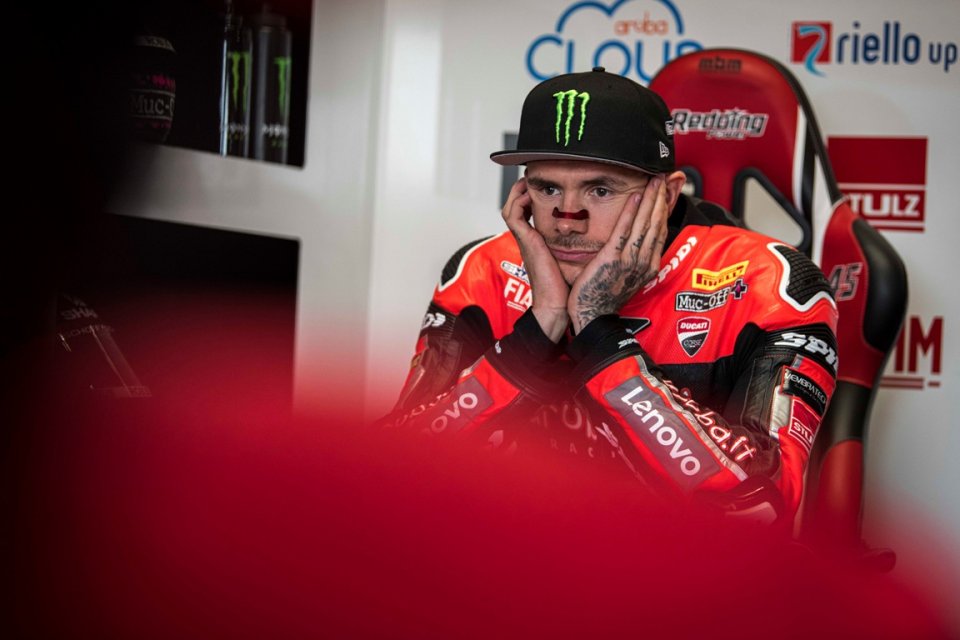 It was a horrid Saturday at Donington for Scott Redding. After the difficulties he encountered in the morning during the FP3 and Superpole, the British rider hit rock bottom in the afternoon when he fell during the first lap.

A fall that weighs like a boulder on the Ducati rider, to the point that his world championship hopes are now completely compromised, and Scott’s face is the emblem of disappointment for what appears to be a total debacle.

“Unfortunately, it was a bad day,” Scott began. “Besides the fall, which can happen, I didn’t have the sensations I wanted. Usually, when it’s wet, I feel good and manage to be fast, while it went in the opposite direction today.”

Redding explains the difficulties he encountered.
“I struggled with the grip, plus the bike kept slipping, especially when cornering. In the morning, I fell, and the same thing happened in the afternoon, when I lost the rear in the first lap due to poor grip. During the day, I worked with the team, trying a different set-up and trying to manage the pace, but we went in another direction.”

The fall in Race 1 almost definitively marks Scott’s world championship hopes, and he doesn’t hide.
“When you don’t have confidence, it’s hard to push and be fast. We have to find something that allows us to be more competitive for tomorrow. The problem is that I don’t have the confidence I want on the Ducati, and I don’t even know how to ride the bike when you lack all that. I’m a rider who loves it dry, but today I couldn’t be gentle, nor did I have a pace. The only thing I want is to find the same sensations as before.”

Apparently, Scott has ended up in a tunnel where, for the moment, there is no way out.
“I trust in the team and in my work group, in the hope of being able to do better on Sunday in race two, so let’s see what’ll happen.”