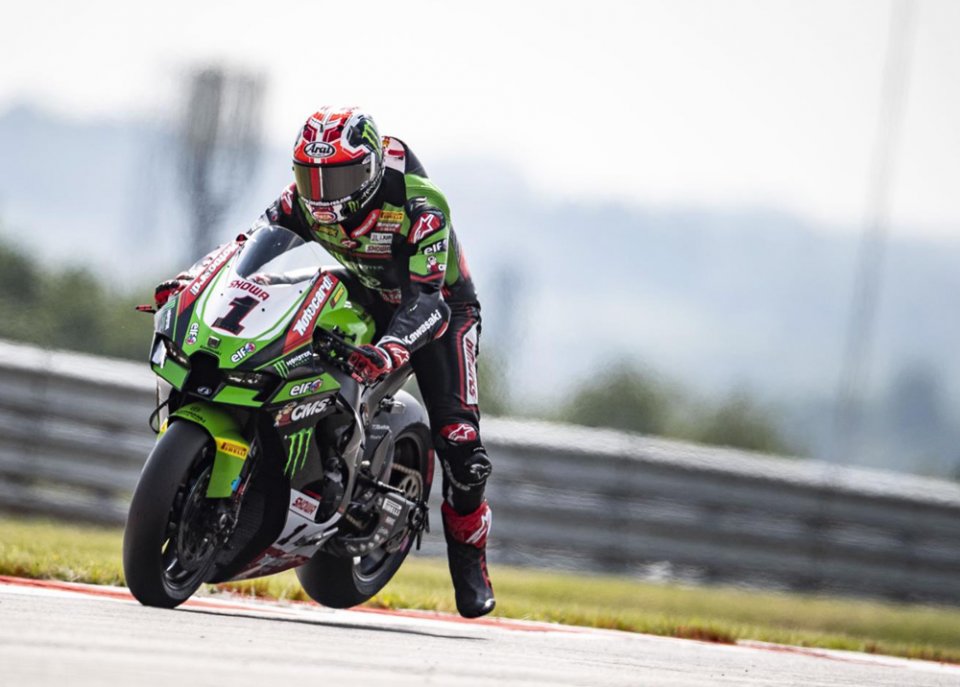 In 2019, the last time the SBKs raced in Donington, Jonathan Rea did a hat-trick. After the Superpole, he set off to increase that streak, but found a practically perfect Toprak Razgatlıoğlu in his way. So the world champion played an important wild card at the Hollywood, a very fast part of the track, to try to follow him. Maybe his past as a cross rider gave him a hand in the long excursion on the wet grass but, once he was back on the track, he could no longer do anything in relation the Turkish rider, who was long gone by then.

“I struggled a bit to stay in front of him,” Johnny admitted. “Compared to yesterday, when I was competitive, I lacked grip, maybe because the rain made the asphalt less adherent, so I was struggling to brake the bike, to lean. I used a make-shift set-up but didn’t make any changes that were too drastic because, fifteen minutes before the start, we didn’t know what to expect.”

They found a track that was still wet in many spots.

“I got off to a good start, then Toprak passed me and, in the next lap, I ended up on the outside at the Hollywood and lost my rear completely, risking a fall, but I didn’t want to give up,” the  Kawasaki rider continued. “I made too many mistakes. I’m disappointed, because I didn’t feel good on the bike. For the first time this year, I had to struggle to do things that usually come naturally to me. It’s strange, because everything was fine this morning, so that’s something to check out tonight.”

Rea, however, spared no effort and often risked falling.

“The first corner was the worst point for me, and then the Hollywood. You just had a dry line, and you had to stay on it. As the laps go by, you understand where you need to go but, at first, you try to push and, in some places, you’re over the limit. I have to thank my electronic tech, Andrea (ed. Gentile) because he saved my ass so many times today. I’m happy to be in the parc fermé after all that’s happened,” he stated.

But now Razgatlıoğlu is closer in the standings: only 15 points separate him from Jonathan.

“He’s fast here. We’ve known that for years. I expected him to be fast, as was Lowes. After my mistake, my race is over. Toprak had too much of an advantage and a good pace. I’ll try again tomorrow,”  he concluded, metaphorically throwing down the gauntlet.

Quartararo: “I struggled with the soft, I won’t touch it anymore”