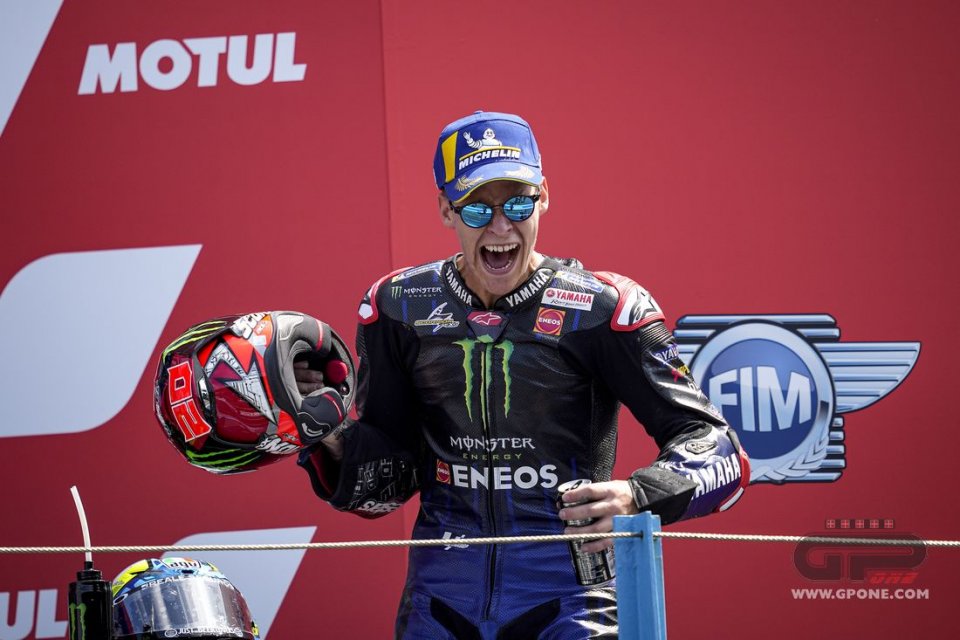 Mature, fast, unstoppable, in other words the best possible version of Fabio Quartararo, who has capitalized on last year's mistakes to become stronger in all respects. His race in Assen was so perfect, you can even forgive him for his performance as a golfer in the celebration, "I promise I will train" he joked. He had already put the right ball in the hole, even managing to get the better of Bagnaia, who in the first laps did everything to keep him from getting away.

“I was struggling so much to overtake him, I tried in a corner, 12, where I didn’t think I would, but I succeeded - commented the Frenchman satisfied - and I struggled a little bit all the weekend with my right arm, but like many riders".

Now he can go on vacation with peace of mind, 34 points ahead of Zarco and 47 over Bagnaia. A nice haul, which perhaps not even he would have expected to have at this point of the season.

"At the beginning of the year I had no pressure from the team, but from the outside - he recalled - The media said that I had taken the place of the king, of Valentino, and that I had to live up to it. Even though I tried not to listen to all these comments, I just hoped they would stop. The Qatar win made me very happy, and from that moment I didn't feel the pressure. Another important Grand Prix was that of Portimao because in 2020 it was a disaster while this year it went well. I thought that this season I would do well, but not like this ”.

There are those observers who think that now it is only Fabio who can lose the title.

“I'm in a good moment in my career, every time I get on the bike I feel better, but I don't think it's just me who can make mistakes. The Ducatis and Mir are very fast and the championship is still wide open. There are so many strong riders, I don't see one in particular, and I have to focus on myself. I have a good advantage but I will have to start the second part of the season as I did in the first two races in Qatar. This will be fundamental ”.

Quartararo has also shown that he does not give up when times are difficult.

“When they are, they have been caused by my problem, like my arm at Jerez, not by the bike. In Barcelona it was a disappointment, it was difficult to see people going to protest in Race Direction - he recalled the GP he did with his leathers open - I laughed about it. I was upset by Mir's words, but now everything has been cleared up ”.

The only drawback that can be found in the pairing of Fabio and the M1 is the top speed.

"We are missing a bit of horsepower, to be honest, but there is one more thing to sort out, which I won't say, and I've already asked Yamaha - he explained without revealing too much - It's an aspect where we struggle compared to all the other bikes, if we sort it out we will also improve our top speed a bit ”.

Now, however, it is time to think about rest.

“The first week I'll have a nice vacation with my family who I haven't seen for a long time, but from the middle of the second week I'll go back to training as always”, he concluded.

Positive Friday for Quartararo and Morbidelli: "Too early to make...