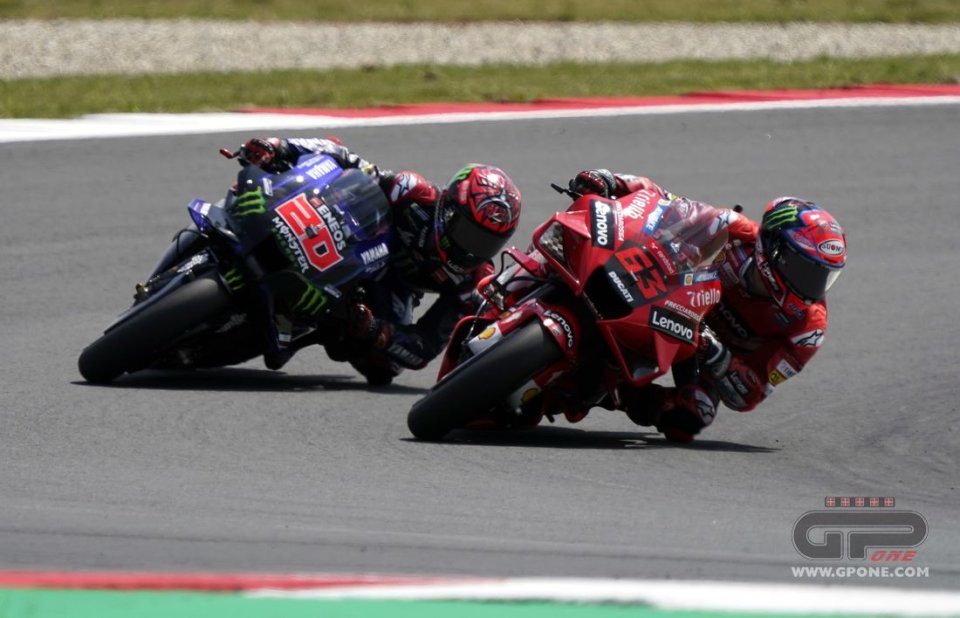 We can’t say he didn’t try, but luck doesn’t always favor the bold. Bagnaia knew that beating Quartararo at Assen would be an almost impossible feat, but he didn’t spare himself. In the end, however, he got to an unsatisfying 6th place, also thanks to a Long Lap Penalty.

“I can be happy today. I gave it my all. I tried everything,” Pecco said. “But we have to progress. I’m talking about both me and the bike, to get a chance to fight for the title. There’s a lot of work to do, and I’ll use this summer break to arrive in Austria better prepared. I’ll also talk a lot with the team to find something more, because Yamaha is one step ahead of us right now.”

Do you think the M1 is the best bike now?
“The best bike doesn’t exist. Some go faster on some tracks and others on others, but Yamaha proved to be the most consistent, and that’s because Quartararo is at a really high level. To answer the question, it's not Yamaha that's the best bike but Fabio who’s the best rider.”

You now have 47 points behind him in the standings.
“That’s a lot! I always try to do my best but, like I said, both myself, as a rider, and Ducati have to progress. For a chance to fight for the championship. we need to further improve, to be able to get more from the tracks where we struggle, like here in Assen.”

Today you made the most of Ducati’s horsepower to try to stop Quartararo.
“It’s clear that having more horsepower doesn’t mean being faster on the lap. I was able to overtake Fabio on the straight because I came out really well from the last chicane and he really badly. However, at turn twelve, I lost five or six tenths, and not only compared to Quartararo, Nakagami was also faster. Today was a very, very difficult race.”

How do you think you could have finished without the penalty?
“At most, third or fourth. I would have had to play defense anyway. The Yamahas were too fast for us. To try to be with Fabio, I pushed hard and it’s easy to make a mistake when you do. In the last half of the track, I had to hold on to the Desmosedici because it wasn’t keeping still. Twice, I went to the green because the wind moved me, but I could have foreseem that. I made a mistake and apologized to the team. The difficult thing was not repeating the mistake in the fight against Marquez. It wasn’t easy to be in front of him.”