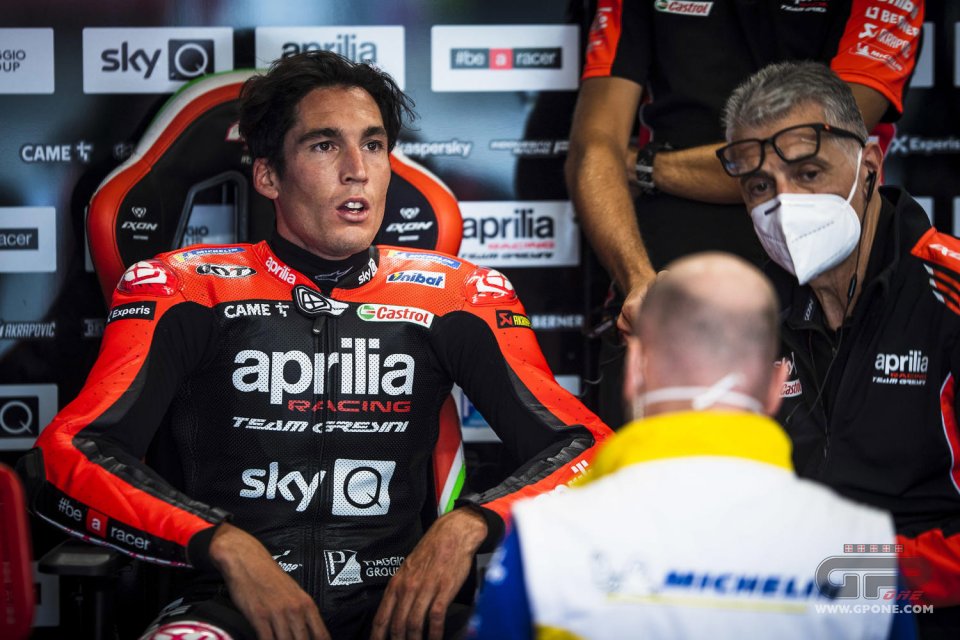 Aleix Espargarò had an excellent race at Assen, which ended in eighth position behind Marc Marquez after having also been involved in a fierce battle with the Honda champion. Aprilia gave yet further proof of a major improvement this weekend, so the scenario drawn by the rapidly-spreading rumours that see Vinales ready to leave Yamaha to head to land in Noale in 2022 did not seem science fiction at all.

Espargarò immediately set the record straight in the meeting with the journalists.

"I will not comment in any way on this rumour about Vinales in Aprilia".

Okay, but at least you can be satisfied because it's nice to associate Aprilia with the name of a top rider like Vinales. It means that the project has improved a lot.

"Actually, I was very angry when I heard from Massimo Rivola that in 2022 we would not have two more bikes on the track. Then I was also very angry when I learned that some young Moto2 riders did not want to come and race with us. I love Aprilia, I feel this project as if it were mine and I always want to improve. I think that these riders who are in Moto2 who had the chance to come and refused will regret this choice in the future. They have missed a great opportunity and I hope that my team-mate in 2022 can be a really fast and strong rider, because we deserve it and we are not far from the top ".

What can you tell us about this race in Assen?

"I'm happy with my race pace, but I'm a bit frustrated. I could have stayed further up, I felt fast and strong but the problem is that when we are in the race I always have a hard time overtaking, this is my limitation. I felt for example that I was stronger than Bagnaia in the final part of the race, but it is frustrating to be in this situation. I did my fastest lap at the end of the race, on the only lap in which I was alone and I was able to make my lines. I lapped almost as strong as I did in qualifying. But when I caught Bagnaia I couldn't pass him and that's it. "

What about the duel with Marquez?

"Marc is tough on the track. He is simply Marc, he is very strong. I know how difficult it is to fight with him, but also with Pecco. Except that when Pecco puts the Ducati straight up it makes an impression, even Marc couldn't pass him. We lost time, me and Marc, fighting between us, he was stronger than me. On the last lap I tried in every way, I did my best lap of the race, but it wasn't enough ".

What is the balance of the first part of the season?

"I'm happy with the work done in the first part of the season, I'm eighth in the championship with 61 points and we have to enjoy this because in the past it was much worse. But we need to improve the engine because that's what we need right now."

The engineers are following your directions, is something fundamental missing from this bike?

"All the Aprilia engineers believe in my talent and in my indications and they know that I would trade something on the Aprilia RS-GP 21 to have a bit more power. The bike is doing quite well, we are using all the available power and the electronics manages it perfectly, also thanks to the aerodynamics. Everything is ready for us to fight at the top, but when we are at full throttle, with all the power discharged on the ground by the tires, I understand that it is not enough to overtake our rivals. They are working hard and I know that I won't have to wait until 2022 to see something really new. We are very close to the best. I enjoy the results we are achieving, but in any case I feel a bit of frustration because I know that we are missing very little to fight for podiums and victories ".

What are you plans for this holiday period?

"In the coming weeks I will do some mountain bike races, I hope to have fun and rest. I will be out and about with my family, it will be the best way to rest, especially my brain".