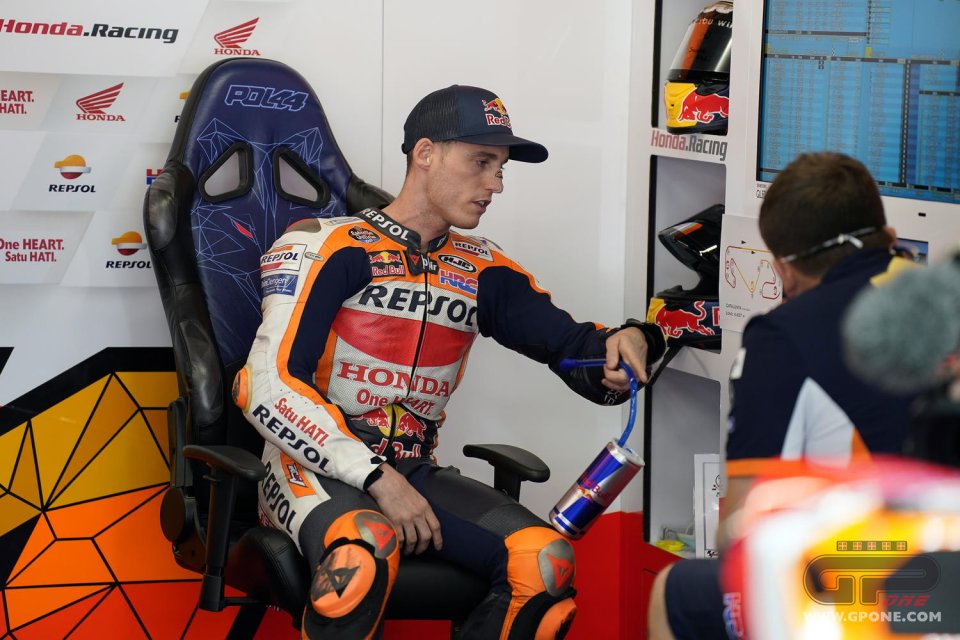 The Pol Espargarò who met with the reporters at the end of the day is the emblem of dissatisfaction. The Spanish rider is usually smiling, cheerful, and able to be positive even in the most complex situations. But that Pol wasn’t there today. Instead, we found a rider who is totally dissatisfied with his situation, with a qualifying session that condemned him to start tomorrow from an 11th position on the starting grid, after he was very incisive in free practice.

The Spanish rider is truly the portrait of disappointment and does nothing to hide it, especially because of the potential he demonstrated in free practice, which had projected him into the role of the antagonist for the two Yamahas. At this point, he hopes to become the star of a comeback race, but the bitter taste in his mouth remains, clearly because he wasted a chance, in any case.

“The problem is that the front soft tire is absolutely useless and unusable for me,” the HRC rider analyzed the situation. “In qualifying, there’s more grip, and the soft tires seem to become even softer, like the other solutions. Everything is accentuated. The tire to choose was the medium, and Nakagami did that, while I made two attempts on the soft one, because I didn’t change it on the second bike. I’m really pissed, because I would have had the pace to fight for something important tomorrow, but starting eleventh gets me in trouble as always. That hurts me. I’m pissed, really super pissed.”

Why were you incisive in free practice without being able to repeat that in qualifying?
“What happens is that everyone knows their bikes very well, while I don’t. When everyone is pushing, that’s when you need to get the most out of your bike without making mistakes. Without winter tests, when I get to the race weekends and push, I make those mistakes that I should have learned to recognize in the winter tests. I lack knowledge of the bike and, even today in qualifying, I made a mistake when I pushed, and I almost lost the front with the soft. I’ll try to put this into practice when I end up in the same situation in the future. I’ll simply use the medium, and I’ll be fine, but now I lack experience, and this makes me very angry.”

So, do you think a winter of tests, which you didn’t have, was decisive?
“Yes, I really missed a winter of 'normal' tests. What I should have learned in the tests, I’m learning on race weekends. I make too many mistakes on race weekends, and I think it’s due to a lack of knowledge and experience on the bike. When you make mistakes in tests, you learn and don’t repeat them. But when you’re inexperienced and make mistakes on race weekends, you just make them. You can fall, go wide or, like today, you can choose the wrong tire and end up behind.”

Did the new frame not help you?
“The new frame gives us more stability, especially on a track like this, where corners are long and fast. We’ve certainly gained something in this area. I can’t say more. My qualifications were crap, and I don’t know if it’s the new frame or the choice of tires. But I think it depends on the tires used in qualifying. Tomorrow we’ll have very tough work to do.”

Baldassarri: "Having had to stay home while the season started in Qatar...