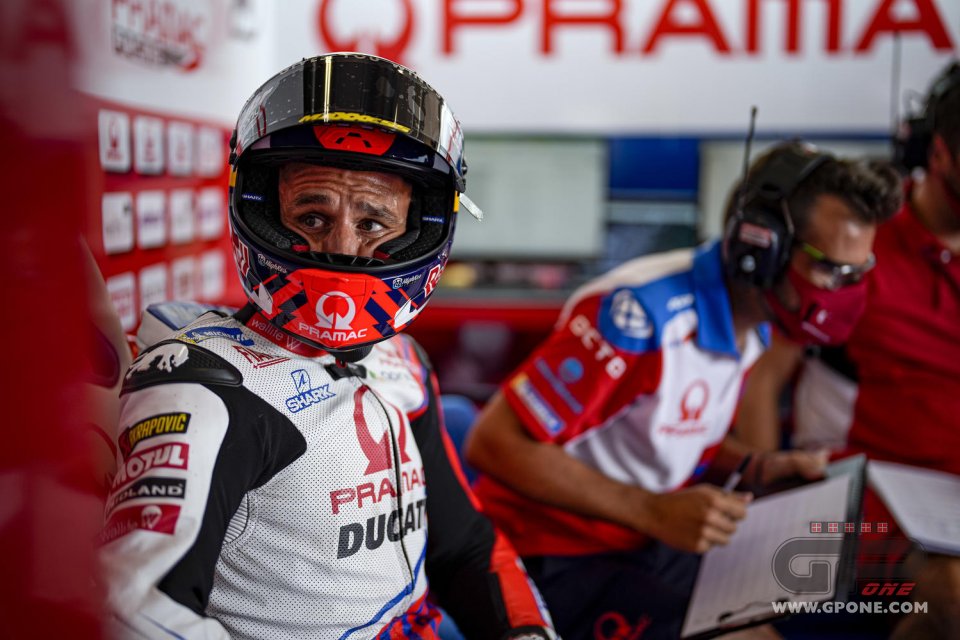 Johann Zarco continues to play the lifeline role for Ducati. In fact, the French rider was once again the best Ducati rider on the track today, finishing in ninth place, with one foot in the Q2 on this Dutch Friday. The track doesn’t seem to perfectly marry the characteristics of the Desmosedici, but Johann managed to save the situation again, this time by grabbing a very important top ten, especially in view of weather that promises to be anything but stable tomorrow.

Assen didn’t prove to be a Ducati track, but Zarco has a very clear plan in mind for the rest of the weekend.
“It can be a Ducati track if we adjust the bike, in my opinion,” Zarco said. “Maybe the Spielberg is more of a track for us, but I think I can be very fast here too. What Vinales did this morning is impressive so, at the moment, I’d call it more of a Yamaha track. But I’m sure that, by working well, we can do it. By working well, something good can happen."

Can you sum up your Friday?
“We did a good job in the FP1. The asphalt here at Assen is unique, even with the new asphalt. The bike’s set-up needs to be adjusted properly because it moves a lot, but I’m quite happy with how we’ve fixed so many things that have allowed me to at least be fast. This was the most important thing,  and now that we have speed, we’ll work on consistency. Today we improved the time a bit, then it started to rain. The sensations with the wet asphalt weren’t bad, even better than usual. Perhaps the track helps with its layout, and the asphalt also has good grip. I can only be satisfied with today.”

Is there a point where Ducati suffers the most?
“The fourth sector is the most complex for our bike. There are high-speed changes of direction. I expected to have these problems, but it’s not a serious situation. There are some spots where we lose a lot, but we’ve identified them well, and I think we’ll be able to solve the problems. Luckily, in other points, we’re already very fast. I realized it this morning, as soon as we got on the track.”

You seem fine on wet asphalt.
“Yes, I felt really good on the wet. It usually takes me time to get to grips with it, with this situation. Instead, in just eight minutes, I felt at ease and finished the session with a smile. I was trying the soft on the front. I wanted to understand the grip over distance. I thought about it this morning, and I implemented this work plan. I also felt safer with this tire, so it was also a safety decision.”

Has the new asphalt greatly improved the situation with regard to the rough spots?
“There's still a big bump between seven and eight, which makes you move a lot on the bike. It’s a quick point, so it’s not the best. But beyond that, I think they did a good job with the new asphalt, also because my sensations on the wet were good right away, and this wouldn't have been possible with the old asphalt. I’ve never ridden the Ducati here, but I feel there’s a lot of grip, and that’s good for us. We’ve seen the times set in the Moto3, so this means that the track’s potential has improved a lot.The times will decrease tomorrow.”