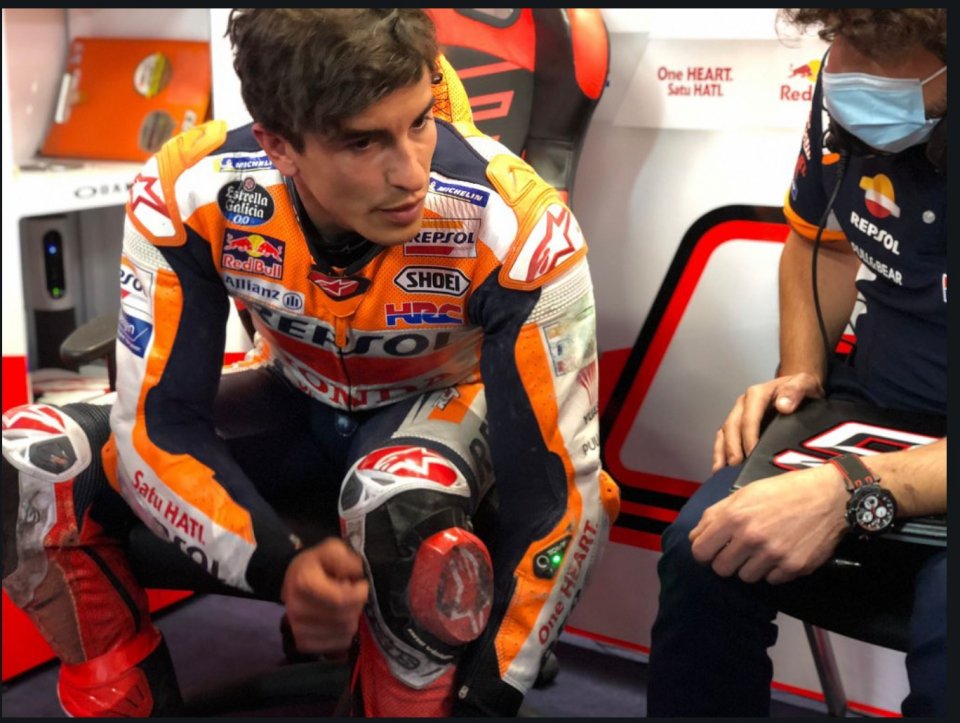 The sixth fastest time obtained in the fourth lap of the second practice session protects Marc Marquez from any tricks of the weather, which is highly likely at Assen, and he will eventually end up in Q2. However, qualifying at the moment is the last thing in the mind of the multiple champion who, in that session, had a violent high-side that could have had serious consequences.

Thrown into the air in the middle of the fifth lap by his runaway Honda, Marc landed heavily on the asphalt, then rolled into the gravel. For long seconds the Spaniard remained crouched on himself, to catch his breath, then returned directly to the garage without going to the medical centre, but the session, which in the meantime became wet, did not see him return to the track.

“First of all, I’m lucky to escape from that crash in a good way,” were Marquez’s first words. “I feel better than I expected to in Assen, and in FP1 I was riding in easy mode. In FP2, I went out and said that it was time to take a step. I was riding well, and it’s true that I was pushing in some parts of the circuit but at that moment in that corner I wasn’t riding over the limit because there was Mir in front of me and I was doing the same as them or even slower."

And in front of Joan there was a KTM and a Ducati. But Marc certainly wasn't going for a stroll. In the previous lap he had cut loose, doing his best in the third and fourth sector and on the fifth lap he had lowered his times in the first and second. Then the high-side, violent, sudden, potentially very dangerous, in the third.

“I’m pushing a lot to HRC because we cannot have these kinds of crashes. It’s true that in that kind of corner we’re against the electronics, but the electronics are there to avoid these kinds of crashes. Only Honda riders have these kinds of high-sides. We have to understand it. There’s something there where we have to understand it for the future – and the future doesn’t mean next year, it means this year. We need something to be more safe, because otherwise it’s impossible to get the confidence and be safe again.” 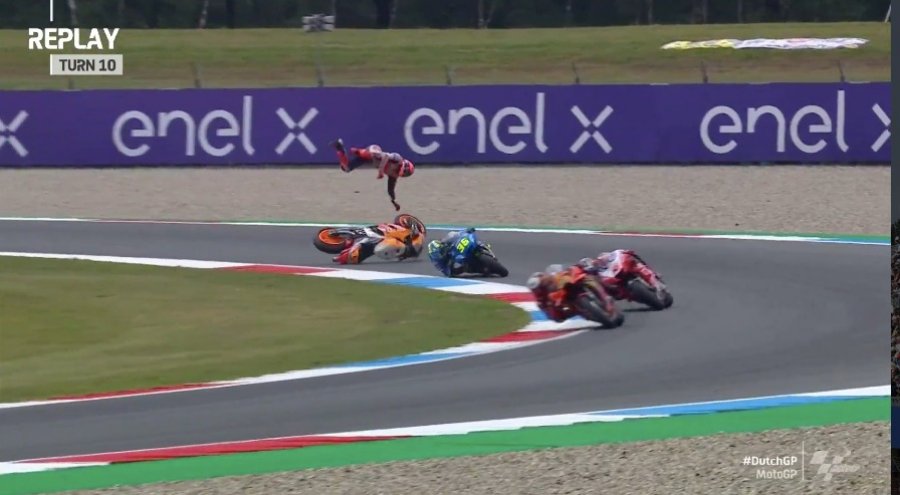 The images reminded us of the years of violent motorcycles, the 500 cc two-strokes, the many high-sides of Kevin Schwantz…

“It's clear: I was lucky to be unhurt in a crash like this,” Marquez began to explain, going into more detail. He rewound the tape back to what happened in a fraction of a second letting it slide slowly in front of our eyes, so quickly do the riders of his level think.

"I was riding well in general up to the point of the crash: I was going fast, and I didn't think I was going to crash, it's one of those corners where you don't crash, the electronics simply didn't defend me. We Honda riders have high sides like this and we have to avoid them at all costs because we can get hurt. I will give my comments. It will be a starting point ”.

Then Marc analyzed the frames of his crash one by one.

"In the air it was all very slow, the moment before, however, I tried not to close the throttle suddenly when I felt the tire let go, so as not to be thrown in the air, I expected the traction control to enter, but it didn’t". 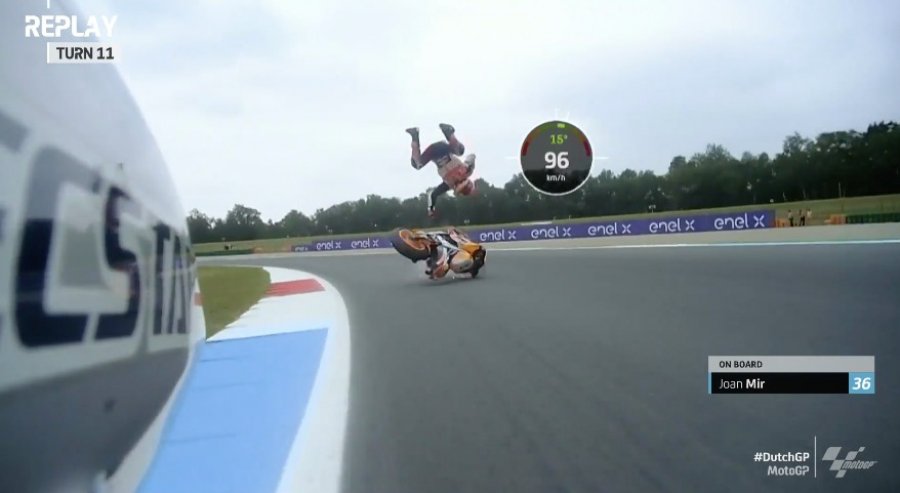 Marc is obviously feeling a bit knocked about, but he's fine.

“Of course after the crash I feel like I’ve had a big crash,” Marquez admitted. “I have some pain in the knee, some pain in the foot, some pain in the elbow, but everything is OK to continue with the same performance for the rest of the weekend. The shock was absorbed by various parts of the body. I am not pissed off just worried but for the Honda riders we need to improve and have more safety, only in this way we can be faster: there are crashes in which it is the rider's fault, when you brake too late, but in this type of crash the electronics must save you. Here we are not talking about the performance of the bike, but about safety: we need to aim directly at the problem. Performance is another thing and everyone can make mistakes ”.

In Marquez’s box there is a new electronics technician, Jenny Anderson. Does she have anything to do with the problem?

"In Jerez in 2020 there was no Jenny working on the electronics. A great team is being created between her and Carlo Luzzi, to improve these things. I am a rider who likes to be in control of the gas ”.

Marc, who uses little electronics, means exactly as it was in Stoner's case, to exploit all the power, but precisely for this reason when the 'parachute' is necessary it must be opened. Perhaps in this new awareness of Marquez there is the fear of getting hurt?

"No. From the moment I got on the bike the doctors told me my right arm had exactly the same chance of breaking as the healthy one. Then of course, in Portimao I had less strength, but that's another story. The truth is, it would be better not to put it to the test. I am unhurt and this is important. I don't even want to think about these things ”.

The eight-time world champion in Assen before the crash was riding with a new chassis, which he will continue testing over the weekend.

"Luckily after the crash the chassis was okay. So we plan to continue with that chassis. I’m really happy with the job HRC did. Maybe it’s the first thing where I feel some clear direction for future," he said. "So we'll have one bike with each chassis tomorrow to continue our work and forget about performance, forget about finding the best result, and concentrate more on improving the bike for the future. Overall, I like it."