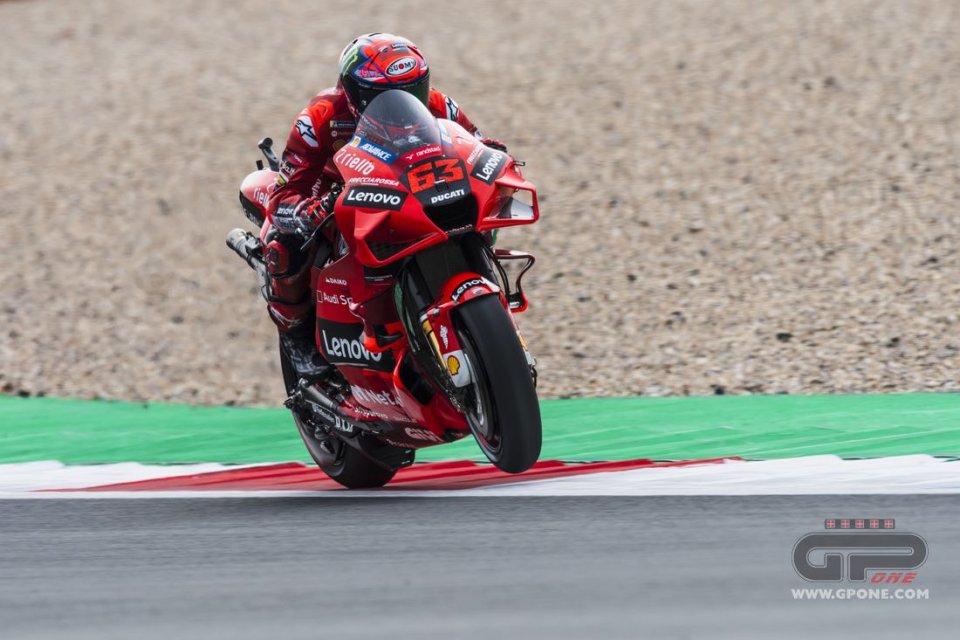 Everyone knows that Bagnaia likes the Assen circuit a lot, but his start in the Dutch Grand Prix was not the best. 12th in the morning and 19th in the afternoon, the Ducati rider from Piedmont knows he still has lots of work to do, but he’s also identified the right direction to take.

“I can’t be satisfied with today,” he admitted. “It’s now a constant. Every time we get to a new track, there’s always something to do on the bike. Mugello aside, we have to try to work on that point and understand why it happens. In the afternoon, I threw away the possibility of being in the top ten because I had a set-up that I didn’t like, but now I know which direction to take, which is exactly the opposite of the FP1.”

But this doesn’t mean that Pecco is worried.

“I still like the track, but I’m not happy with my day, and I think I should adapt to the track more than the Ducati,” he continued. “I noticed it in the morning. I lowered my time by seven tenths on the last lap, just by changing my style. But it’s too early to come to conclusions. In the end, we only did one round and seven laps. As soon as we get it right, we’ll be up front. I know Yamaha and Suzuki are very fast, as are the Hondas. We’re struggling more but, if we solve some problems, I think I can do a race in attack.”

That’s if it’s dry, because Bagnaia didn’t do a single lap today in the rain.

“We had prepared the two bikes with different set-ups, and I started with the one I didn’t like,” he explained. “When it started raining, it was too late to be able to switch to a wet set-up. Looking at the times, it seems to me that everyone did very well after a few laps, and this means that the track has good grip, plus the Ducati is usually fast when wet.”

Jack Miller: “I worked mainly on the race pace with worn tires”

Even his teammate, Miller, wasn’ able to ride the Desmosedici in the rain, having preferred to have two bikes with a dry set-up.

“We were preparing for the race, and changing the set-up would have meant being able to do just one or two laps and destroy the tires. It wouldn’t have made sense,” Jack explained. “I know that I can adapt well to those conditions, and I'm usually among the best, going out would not have changed my weekend.”

The Australian rider is satisfied with his start, despite a 12th place of the day.

“I’m quite happy with this first day,” he confirmed. “We focused mainly on the race pace with used tires this morning. We knew it would rain in the afternoon, and we wanted to try the time attack right away. In the opening minutes of the FP2, however, we had to carry out a set-up test and, in the meantime, it started to rain, preventing us from being able to improve the time. In any case, I’m positive and convinced that we’ll be able to improve tomorrow.”