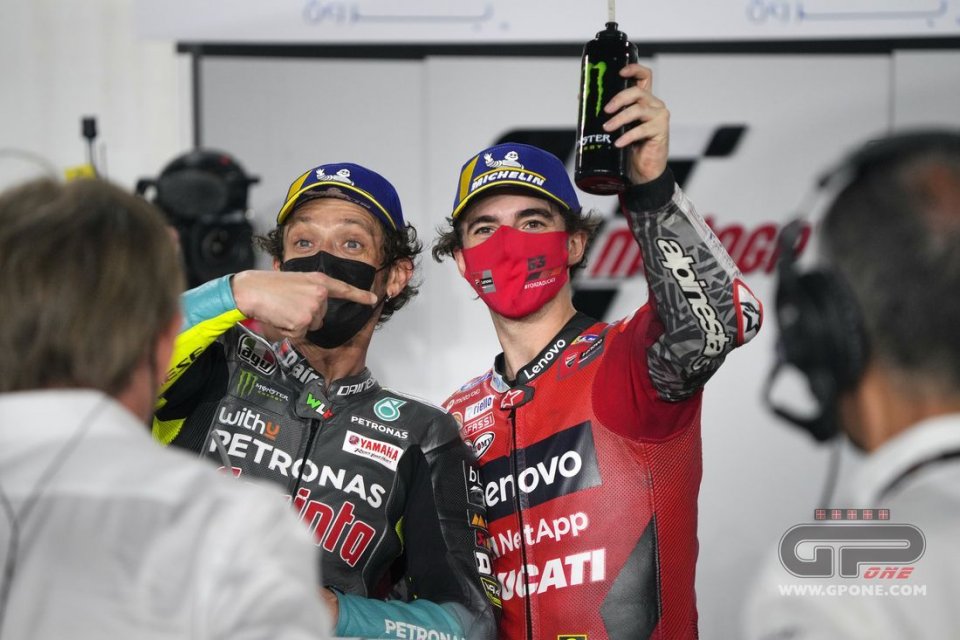 Pecco Bagnaia is at one of his favorite tracks, where he had his first victory in the Moto3 in 2016 and, with him, came the news of the agreement between Ducati and the newborn Aramco VR46 team for the next three years. This means that, starting from 2022, there will be eight Desmosedici on the track. A considerable commitment for the Borgo Panigale constructor, but the rider from Piedmont isn’t worried.

“If they’ve decided this, it’s because they can handle the situation,” he  expressed his confidence in Ducati. “Personally, I’m happy, because we’ll have more chances to grow as a constructor. Perhaps the development of the bike could become more complicated, because there will be more ideas to follow but, like I said, they’ll be able to manage this too.”

The words of the Saudi prince also left the door open regarding the possibility of seeing Valentino again in red next year. Pecco preferred to tread lightly on this topic.

“We don’t talk to each other about our future, but about other things,” he said. “I don’t know what he wants to do. Last I knew, he would’ve liked to finish his career in Yamaha, but whatever he feels like doing will be the right thing for him. If he were to come to Ducati, with his wealth of experience and coming from Yamaha, he could help us improve some aspects of our bike, but we’ll have to see what he decides.”

Bagnaia prefers to concentrate on the Assen track which, as mentioned, he likes a lot, but he’s not among the best for Ducati on paper.

“I think we can have a nice weekend, because the Desmosedici now manages to ride well and is strong in the fast corners,” he pointed out. “Yamaha and Suzuki will certainly be strong, but we’ll also be competitive. The new asphalt will also have to be tested, and we’ll have four tire options to choose from, so it won’t be easy.”

Another unknown factor is the weather, which seems to be very uncertain. But even this doesn’t worry Pecco.

“At the Sachsenring, when it started to rain, I was able to be as fast as Marquez, maybe because I wanted to recuperate, and he wanted to b break away,” he said smiling. “I usually feel good in that situation. Even at Le Mans, before the bike change, I went from nineteenth to seventh place.”

Speaking of the German GP, Bagnaia also understood what happened during the first laps of the race, when he struggled a lot.

“The data shows that I had not pushed enough and had not brought the tires up to temperature. I lost the rear on a few occasions and, so as not  to make mistakes, I was cautious. My mistake,” he admitted.

The last thing he spoke about was KTM, which is becoming ever more dangerous in recent races.

“It’s clear that the bike has progressed and that Oliveira is riding really well. They’re a duo to be feared for the championship,” he concluded.