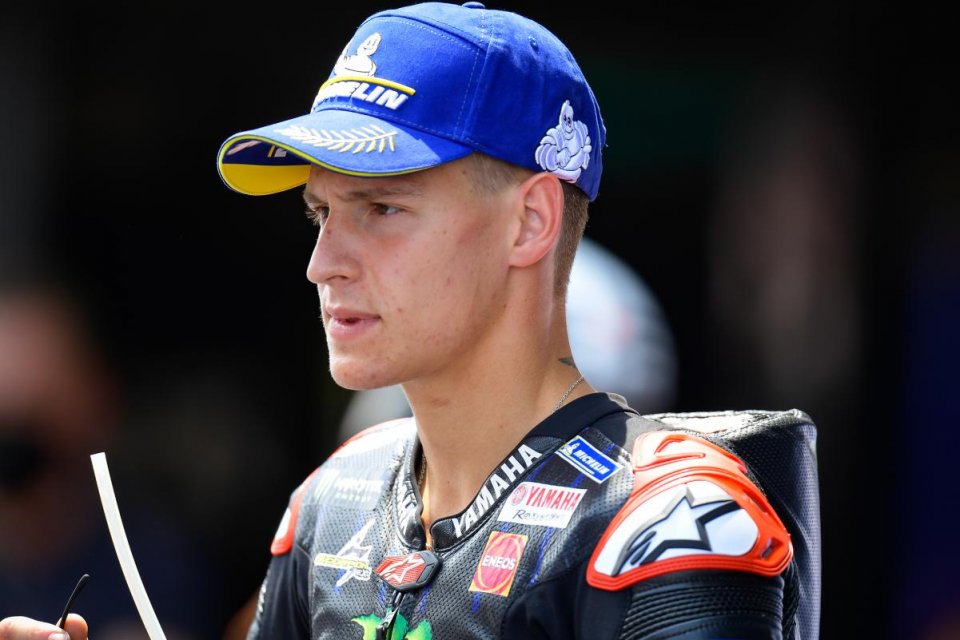 Yamaha’s young French rider put some more precious points on the scoreboard by finishing the race on the third step of the podium, and he is currently first in the championship on 131 points, followed by Johann Zarco (Ducati) at -22. It was a demanding race, and since Fabio still had some doubts about his strategy yesterday, we have to say that overall he was able to maintain his lead in the standings.

"It was a very positive day, although definitely more demanding than the last few races. I didn't expect to go so well, I gave my best and always went on the limit - said the French rider - We knew that in the second sector at turns 6 and 7 we would have had some problems and so it was also in the race, I had a good pace but I knew that finishing on the podium would be difficult, so I concentrated on finishing the race well, trying if possible to finish in front of the Ducatis. With this victory Marquez has gained a lot of confidence, we will have to keep an eye on him, Miguel and the three Ducatis for the rest of the championship. "

Traditionally the Sachsenring is a narrow circuit that limits the possibilities of overtaking, how difficult was it to get out of the group you were in at the beginning of the race?

"The start didn't go as I hoped and I had some difficulties braking late in the first corner, it's something I have to work on. When the rain started to come down I thought back to Le Mans, but overtaking on this track is a nightmare, then I saw Marquez and Oliveira break away from the rest of the group and I focussed on managing the tyres well and attacking Aleix and Miller. Overall I think it was a very positive race, I feel I have learned a lot, both in tyre management and mentally keeping calm. The feeling was there but not the right kind of feeling for this track. "

All the riders on the podium today had a reason to be happy. Marquez for obvious reasons because he returned to the podium, Oliveira because he continued to show that he is competitive. Can we also say that you are for having scored more precious points in the standings?

"I think the points are important, and certainly in the current situation in the championship, getting on the podium and continuing to score points is important, but at Assen I will not race looking at what Zarco is doing, I will race to the best of my ability trying to win."

Your Yamaha and Vinales' seem to be travelling on different tracks, you are on the podium and he finished last. What's going on?

"Honestly I don't know, certainly the feeling this weekend was different, especially on the front. I think they are trying different setups but I prefer to focus on my results at the moment. Vinales is definitely a great rider but I prefer to keep an eye on my rivals in the standings rather than in Yamaha ".

With Marquez returning to victory today, do you think he can upset the balance of this year's championship?

"I am happy for him after what he has been through, and Oliveira also had a good race and gained points, it is certainly possible that he will continue to improve during the championship and eventually he will return to his pre-injury level, who knows, we are still mid-season ".

The new chassis of this year's bike seems to have improved Yamaha's performance a lot, and what about the rider instead? You seemed to compensate for Yamaha’s traditional disadvantage on this track today.

"The bike has improved a lot, even though we still had some problems on this track. As far as I'm concerned, I think I will continue to improve as a rider, not so much in terms of my speed as in terms of my head. Being fast is not enough, you also need to maintain a clear head and knowing how to make the right decisions in the race and I think I'm improving especially in this aspect ".

How important is this podium after Barcelona?

"The last race was strange, those penalties and that problem with the leathers ruined what would have been an excellent race. The tests on Monday were very useful so returning to the podium the next race is definitely a positive experience."