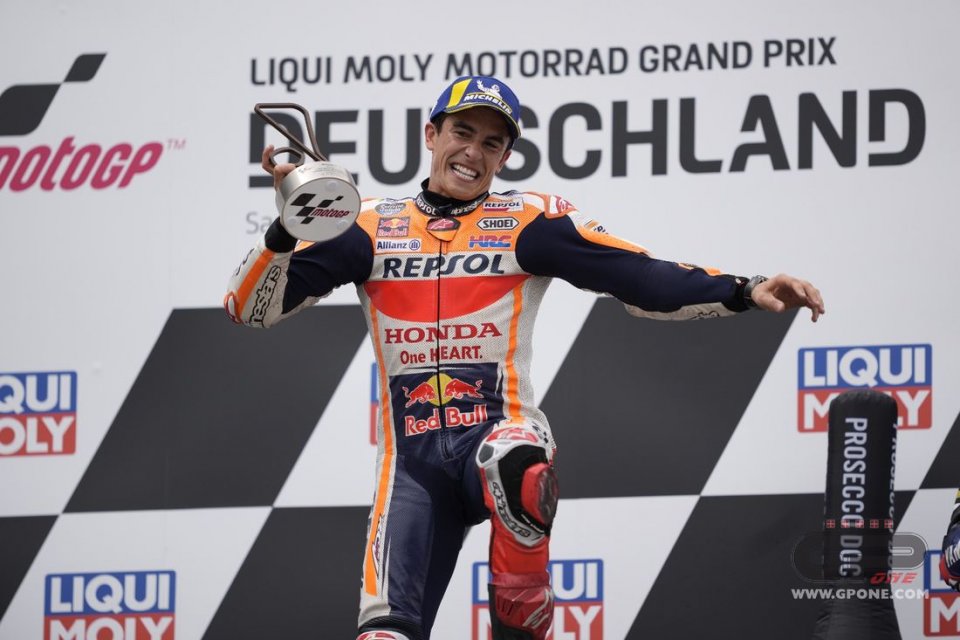 We've always gotten used to miracles, small and large, during Marc Marquez's career. But, at the Sachsenring, he surpassed himself. He was on his track, with a design that is a godsend for his physical problems, and with a Honda that had forgotten some of those problems, but the victory he won remains a masterpiece. A success achieved after 581 days of fasting, a terrible injury, a succession of surgeries, and suffering. Up until now.

“I still don’t know what I’m feeling,” he tried to find words after tears of joy. “I had a hard time, and many helped me… the doctors, Honda, my family, my team. You can’t get out of this situation alone. This is an important victory for me, but also for Honda, because we got here almost on empty and we refueled.”

But he was on the track, and he was alone.

“I knew I was on a good circuit for me, but was coming from a difficult situation, from three falls in a row,” he recalled. “ I just rode, trying not to think about what I was doing and where I was coming from. I took some risks when I saw a few drops of rain. That made me think it was going to be my day. It’s true that, in the end, I’m the one who suffered, but having people by your side helps a lot.”

Marquez revealed that Mick Doohan also played a role in his resurgence.

“We met at Mugello, and I told him I wanted to talk to him, to find out what he had been through after his accident,”  he said. "I understood so many things. I was on the phone with him for half an hour. Mick was talking, and I was listening. It was as if he were describing what was happening to me. He also didn’t understand anything about the bike at the beginning, then he felt better, but he made mistakes that were not normal for him, stupid falls. Talking to him helped me a lot.”

“On Tuesday, he called me and said, ‘You have to win on Sunday, you know.’ I replied that I was coming from three  falls, and he said, ‘It doesn't matter, you have to win.’ This made me feel more convinced. There was also the rational part, represented by Emilio Alzamora, who told me to be careful. In the end, I followed my instinct.”

Which doesn’t mean that this race was a walk in the park.

“I only lost at one point on this track, in the change of direction followed by a right corner. I don’t feel safe and secure there,” he revealed. “It was tough mentally. The three falls at Le Mans, Mugello, and Barcelona came to mind. I didn’t think about my  arm. I worked a lot mentally, to try to forget it, even if it’s not okay yet. That’s the solution.”

The result was a winning one.

“This was an important victory for the man. The rider is not yet what he was, but we’ll see in the future if I can go back to riding the way I want,” Marc explained. “It’s definitely a success that’s different from all of them, even if I don’t know why. I’m not happier than usual. It was a very tough race from a mental point of view, coming from three falls. The easiest thing would have been to settle for the podium, but that’s not my mentality. If I had fallen, everyone would have gone against me, but I followed my instinct.”

That didn’t betray him.

“It was hard to stay focused and never give up,” he continued. “At times, I realized that I was too stiff, because I didn’t want to make mistakes. Then I forgot about it. I started thinking that Oliveira was my brother Alex, like when one goes after the other in training. I believed in myself."

“Like I said on Thursday, this is a track where I had no physical limitations, and the Honda had fewer problems, so I went on the attack from the first session,” he declared. “Also, the day in Barcelona helped me a lot. It was my winter test. I was able to understand how to ride. This victory gives me further motivation, but I’m still not the same Marc I was in 2019. It’ll take time, and I already know that I’ll struggle again in Assen. Then there’s the summer break. It’ll be important for me, but I don’t think I’ll win in Austria. I’ve never done it, and I don’t think it’ll happen this year," he said jokingly.

But now he’s sure he can go on vacation with a nice memory.

“I’m proud of what I’ve done today,” Marc clarified. “In sports, you never have to look at the past, but now I have more motivation, even if I want to be even better.”

The road will be long.

“When I was home, injured, I thought that, when I got back, I’d be strong. But, after the first time I rode the MotoGP, I realized that I was far from my level,” he said. “From there, things were difficult, so I tried to isolate myself from the outside and focus only on myself. I went through a difficult time, different from when I had my eye problem. In that case, three months were enough to solve everything. But, this time, it took much longer. My physiotherapist lived at home with me for a year. After the Barcelona GP, I decided to go back to my normal life, train with my brother. And that’s what I did.”

There are those who, driven by enthusiasm, asked him about his expectations for the championship.

“I know I’m not going to win the title this year, so I don’t care where I get to. Who remembers who finished second in 2005? Not me,” he smiled.