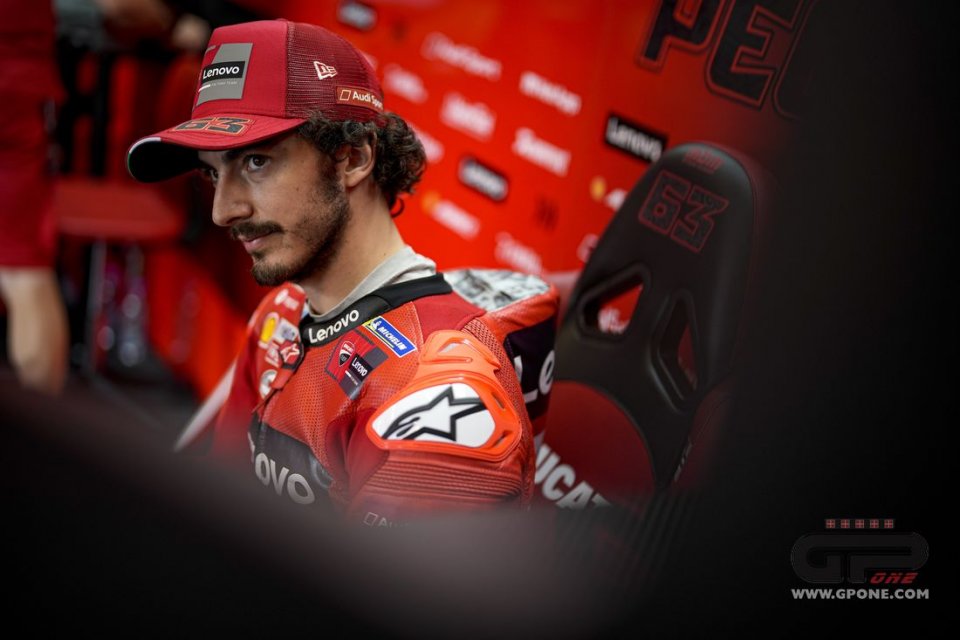 Angry, no. Annoyed, yes. It couldn’t be otherwise because, if Pecco Bagnaia is starting tomorrow at the Sachsenring from the fourth row, it’s not entirely his fault. Between slipstream hunters and yellow flags, his qualification had more traffic and unexpected events than a day trip to the seaside on a summer Sunday.

“At the second exit, I kept behind a group of riders because I prefer to ride alone,” he explained. “As soon as I started pushing, they slowed down, so I found Nakagami in the middle of the track, and I aborted the lap. I started off again and, at turn seven, there were Martin, Alex Marquez, and Aleix Espargarrò waiting, not on the trajectory, but close to the ideal line. Then, at eight, I also found Oliveira, so I had to stop again, even though I was wearing a red helmet. Finally, at my last attempt, Nakagami fell, and there was a yellow flag.”

The result was a 10th place on the grid.
“It was impossible for me to do a lap, because I found slow riders in the middle of the track. It was like being in the Moto3. We often talk about safety, and some MotoGP riders behaved that way today. I don’t like that.”

Should they be penalized?
“I’m not the one to decide or even make certain requests. Everyone can make mistakes but, from the images on TV, the situation is clear.”

On the bright side, you were last yesterday, and today you went straight into the Q2.
“I adopted a different strategy this weekend, because it’s very important to have a good pace here with worn tires and, in fact, I never changed them. I improved a lot this morning and, in the FP4, I started with a rear tire that had sixteen laps. I took it up to thirty-three, more than the race distance, and I was still lapping in 1’22”7. In the FP3, I was the rider with the third best pace, so I’m happy with the day, but not with qualifying.”

You’ll have to race on a comeback, but it’s not easy to overtake at the Sachsenring.
“I’ll have to use my imagination to overtake tomorrow,” he said laughing. “I hope to make the best start of my life. It’ll be important not to waste time with the leaders. Zarco doesn’t have the best pace. If he got in front, he could slow down the group.”

The sprint at the start will be essential, but you don’t seem to be able to take advantage of the Ducati’s qualities lately.
“When I try the start, it’s always good. But, when I’m in the middle of the group, I struggle. The first corner is always difficult. There are very aggressive riders, which is normal, so I have to improve, especially for tomorrow, because the straight is short here.”