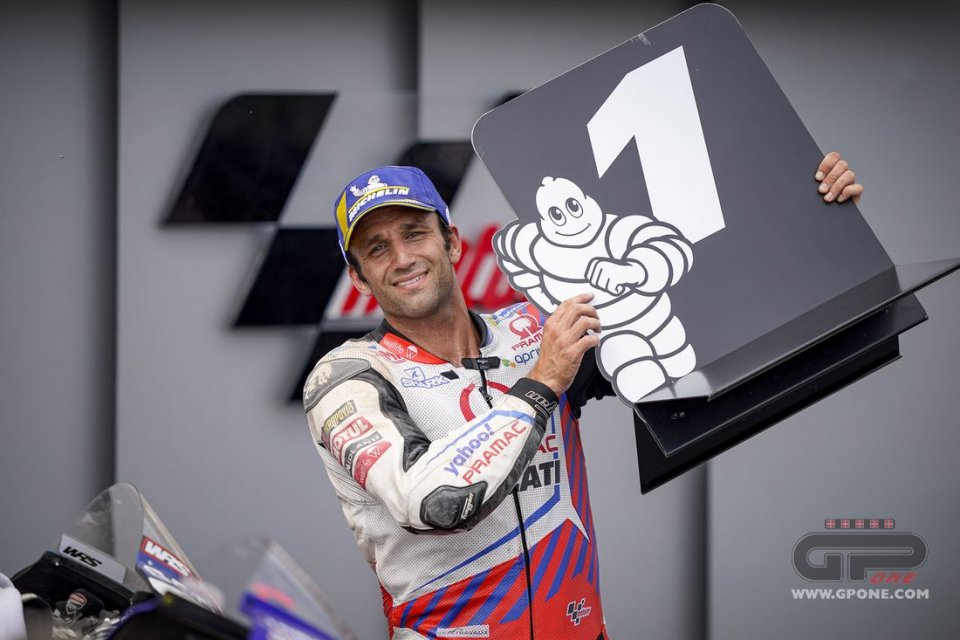 With a torn suit and a smile on his face, that’s how Zarco’s qualifying session ended. After having set a time that earned him a pole position at the Sachsenring, the Pramac team’s French rider ended up falling in the gravel, fortunately without consequences. The yellow flags for his and Nakagami’s fall did the rest, preventing the other riders from improving.

“It took me some time to calm down with all the adrenaline in my body,” Johann smiled. “I wasn’t able to make good use of the first tire, but I did it with the second. Then I tried to give a little more in another lap. I entered leaning too much at turn five, and the front closed. Luckily, it was just a slip. I was really excited. The Sachsenring is a difficult track for me, and even Ducati didn’t have the best statistics here, but the potential is high, and I hope to set aside some surprises tomorrow too.”

In qualifying, however, some riders complained about those who slowed down along the track to wait for a good slipstream.

“Having a good reference always helps, especially when a tenth less can be worth five positions,”  Zarco admitted. “I need it too. Today, without it, even if it wasn’t very close, I wouldn’t have been able to get the pole. It’s true that today we saw some riders waiting at the last two corners, and it was a bit strange, but it also happened because this is a very short track. The important thing is that there are no accidents. We have to be able to do it without creating risks.”

Aside from the slipstream, the French rider will start tomorrow in front of everyone with his Ducati, but he knows that it’ll be much more difficult in the race than in qualifying.

“Right now, thinking about a victory is really optimistic,” he explained. “The biggest question is regarding my pace. From yesterday to this morning, I progressed. But, in the FP4,  I was first only because I mounted a new tire at the end of the session. I struggled with the worn one.  I hope to improve again tomorrow. It’ll be difficult for everyone, and I think starting from the pole will help me manage the tires, because you lean to the left a long time and, when the tires overheat, it becomes difficult to control the bike.”

Johann doesn’t rule out that there may be surprises.

“It’s normal when  all the riders are so close,” was his opinion. “Making predictions is difficult, but I think Quartararo is not wrong when he said yesterday that Marquez will be ahead in the race.”

Meanwhile, France is enjoying its two gems: tomorrow, in front of everyone on the grid, but also in the general rankings.

“Two top French riders can make the younger generation dream, but we have to continue like this, otherwise they’ll forget everything quickly,”  Johann stated “The Federation must make the most of this moment. It would be nice to have an academy like Valentino’s in France.”