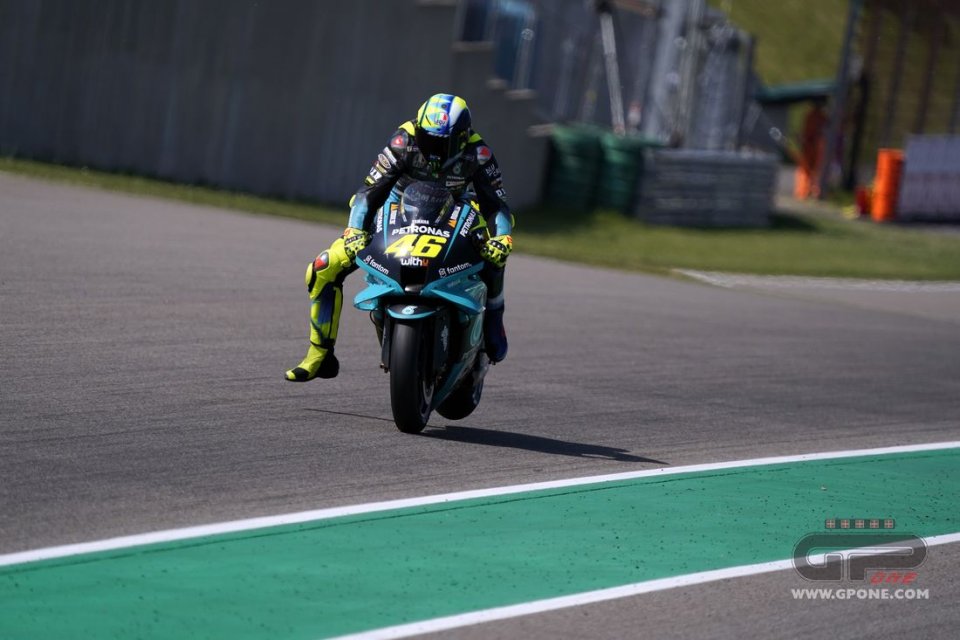 It’ll be another uphill Sunday for Valentino Rossi, who’ll be starting at the Sachsering from the 16th position on the grid. We can say that this has been nothing new recently, but getting back on such a narrow and winding track will be even more difficult than usual. In Germany, besides Quartararo, all the riders struggled, and Morbidelli and Vinales will start even further back.

“In the past few days, I’ve heard and read that this would be a good track for Yamaha, but I honestly didn’t remember that it was,” the Doctor said smiling. “We had some good results in the past few years, but this is a circuit with long left-hand corners, where the tires warm up, and the M1 suffers a lot from that aspect. Also, the opponents have improved. In fact, in the first two rows, there are lots of different bikes. Quartararo is strong, but the other Yamahas have problems.”

What’s your situation?
“Better than yesterday, both in terms of my sensations on the bike and in terms of pace. I suffered less even in the third sector. However, as always, everyone is very fast and close, so I’ll start sixteenth, and there are many top level riders at the back of the grid. Now we have to continue working to improve small details.”

What do you expect from the race?
“It’ll be difficult starting so far back and, then, you never know in the MotoGP. From one day to the next, there are those who improve and those who get worse. It’ll be a long race, of thirty laps, and also physically tough.”

Will Marquez be able to battle it out?
“He’s fast. He’ll be there tomorrow . With new tires, there have been a lot of fast riders, but he’s doing well on his pace too.”

Speaking of qualifying, many riders slowed down to wait for the slipstream, in the Moto3 style.
“I expected a bit of trouble would happen here, because it’s a tight and short circuit and, with so many bikes on the track, there’s more chance of finding someone waiting and getting in the way. The Moto3 riders do much worse, but they need our example. I’m concerned that, one day, they’ll be in the MotoGP.”

There’s a lot of talk about tires these days, since Michelin brought the hard with the 2019 frame. What are your feelings?
“That's is how things are. Until 2018, I was competitive. I hadn’t won races that season, but I finished third in the championship. I was second on this track. Something has changed since 2019. From that moment on, I had to use a different set-up on the bike. I’ve always wanted a stiff rear, which gives me support, but the new tires suffer from this type of setting. To make them work, you have to use softer settings, and I end up in trouble, because I can no longer take advantage of the benefits of my riding style. But that’s the way it is, and we need to improve.”

Could using the hard tire in the race be a possibility?
“It has the same compound as the medium, but with the old frame, which is harder, but the tire is less performing. It’s difficult to think about using it, even if the temperatures were lower.”

Paolo Ciabatti said he confirmed that the agreement between the VR46 and Ducati will be announced, and also that you’ll be choosing the riders.
“That’s what'll happen. We talked, and we'd like to decide on our riders, also because Ducati has shown that it has great faith in the young generation of our academy. It’ll be very difficult for me to be racing in my team next year.”