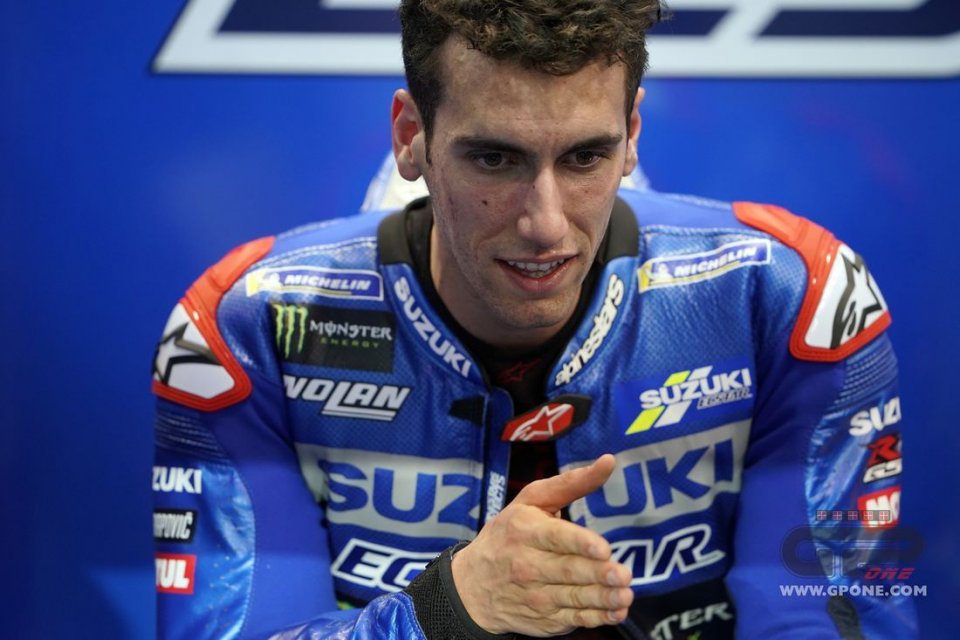 It was not a particularly exciting qualifying day for Suzuki: Joan Mir failed to get into Q2 and ended up in the rear, in 17th position, behind Valentino Rossi. For Alex Rins it went slightly better: he will start from the fourth row, in 11th position.

"Everything went wrong, we made some improvements from yesterday but we were still missing something in the fourth sector and I couldn't go into the last corners as I wanted - explained the world champion - Yet we are fast on this track, it's a shame. We also had a problem with the front and I was unable to get directly into Q2 during FP3 for a few tenths. In the afternoon the problem with the front got worse, and the yellow flags were the coup de grace. I understand that safety on the track is essential but it was still frustrating ".

You spoke about a problem with the front in the last corners, is it a question of tyres?

"It's strange, the temperatures are very high and normally the Suzukis don't run with hard compounds on the front, we've always done well with the mediums. I'm not sure if it's the right choice for tomorrow's race because I didn't have a good feeling with the bike, but it's not just a tyre problem. I think it's more a question of setup in general, yet compared to yesterday's free practice we have improved a lot, almost a second and a half difference, definitely not the Sachsenring that I imagined ".

Everything we thought we knew about Sachsenring is turning out to be wrong this weekend. It shouldn't be a favourable track for the Ducatis and Yamahas, and there are two in the front row. Suzuki should have an advantage and instead they are missing something. What’s going on?

"First of all we have to keep in mind that Ducati has made enormous progress in development this year. The track conditions are also almost extreme, maybe the temperatures are favouring the Ducatis but I can't say with absolute certainty. I managed to do as well as I wanted, I was missing feeling with the bike. It's not even the team's fault, I think they did a great job, what is frustrating is that in the first sectors with the times I’m one of the first and then I lose everything in the fourth sector. There is definitely something wrong, but seeing Alex Rins do well also in that section of the track gives me hope that by collecting and putting together all the data, we will be able to figure it out before tomorrow's race ".

So what will the strategy be for tomorrow, in a circuit where it is difficult to overtake?

"If we can solve the problem in the fourth sector of the track and maintain a good race pace, I think we can be competitive and be in the top ten, but starting 17th is still a disadvantage."

Alex Rins still injured, but keeping up the pace

Slightly more positive was the result of his teammate, Alex Rins. The Spaniard, still injured in his hand, initially hit the target of Q2 after getting into Q1 but lost the pace in the final laps and finished 11th on the grid, squeezed between the bikes of Bagnaia and Alex Marquez.

"Overall I am satisfied, despite the problem in my hand, we have a good race pace and we managed to stay among the first, in Q1 I managed to do a good lap, but unfortunately in Q2 it did not go as I hoped. What penalized me the most were those riders who were slow in the middle of the track, it is something we continue to discuss in the Safety Commission and every time history repeats itself and nothing is resolved, I think we need to start taking a harder attitude towards these situations ".

What do you think should be done about it?

"Seeing all those riders waiting for a tow is a problem that must be solved with penalties, we are all experienced riders and able to do good laps even on our own, if you happen to catch a tow, so be it, but this situation is beginning to be frustrating ".

What is your physical condition like for tomorrow's race?

"My hand is starting to hurt a lot, I did FP3 with painkillers, but the race pace and the results are good, so I will race despite the pain. It will for sure be a tough race, with little chance of overtaking, so the goal will be definitely to keep a good pace and finish . Tyre management will also be important, you can already see the drop in performance after seven laps ".