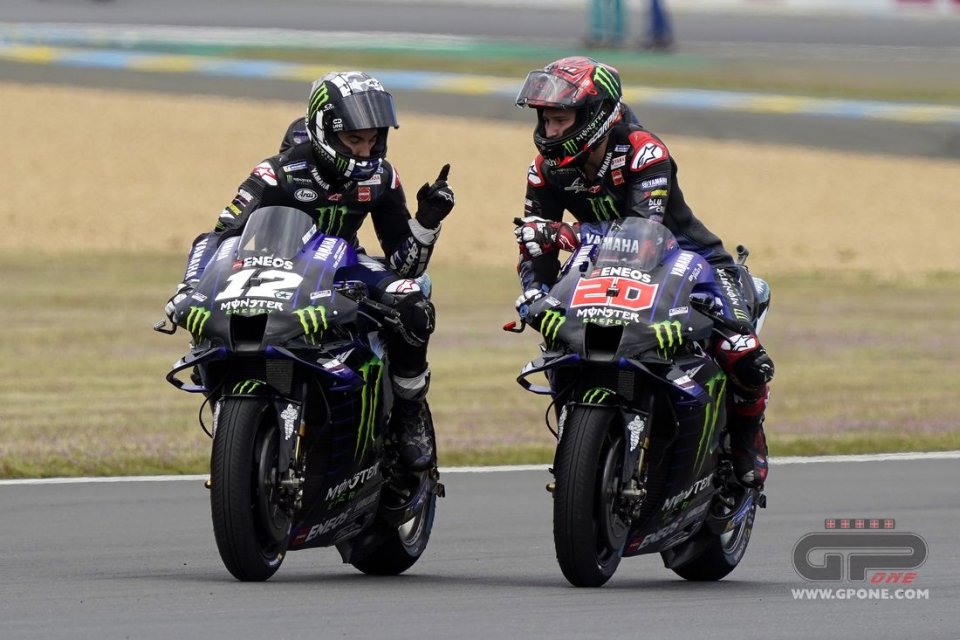 Yin and yang, zenith and nadir, black and white, you can continue with the game of opposites to describe what is happening in the factory Yamaha team. Tomorrow at the Sachsenring Quartararo will start from the second slot on the grid, Vinales from the penultimate. Two opposite results that are difficult to explain.

On the one hand there is Fabio, smiling as usual and knowing that he has good cards to play. "It was a positive day - he said - In the morning I kept a good pace and in FP4 I never stopped, it was interesting to understand the behaviour of the tyres without making stops, because it is totally different from when you stop in the pits and then leave. I expected to have better sensations on the front, there is something to improve, but this front row is a really good result. "

Maverick, on the other hand, is almost sullen in his declarations. “Today I didn’t have any more, the yellow flag and the crash in the morning did not affect me. We have to be optimistic: I can't go any further back than this, so I will definitely improve” he joked.

A small consolation, because while his teammate is fighting for the World Championship, the Spaniard, after winning the first race in Qatar, has no longer been able to get on the podium. In Barcelona there was an important change in his garage: away with Garcia and in with Galbusera in the role of crew chief.

"Esteban and I are good friends, it is a relationship that goes beyond sport, but no one has ever said that my results were his fault, especially me - he stressed - Yamaha decided to make a change and we are trying to improve. If we don't succeed here we will try in Assen”.

A very small consolation indeed, when Fabio can instead devote himself to dealing with his rivals. “The first 6 riders on the grid are very strong, certainly Marquez and Oliveira are, but also Miller. It will be a fun race ”.

Vinales, on the other hand, doesn't know what to expect, and maybe he doesn't even want it. "It is difficult to understand what will happen - he explained - I have no pressure, I know I have a good pace and maybe I will be able to recover in the second part of the race".

He says nothing else, apart from complaining about a chronic lack of speed in the middle of the corner. Other thoughts are denied him, this time no one slotted in behind him to take advantage of the tow, which Quartararo does not like.

"In my opinion, certain behaviours are a bit dangerous, I don't have much more to say. I don't need to have anyone in front of me, I don't even know if it helps. But we should be an example for the youngest” he underlined. Hoping not to be behind anyone even tomorrow.