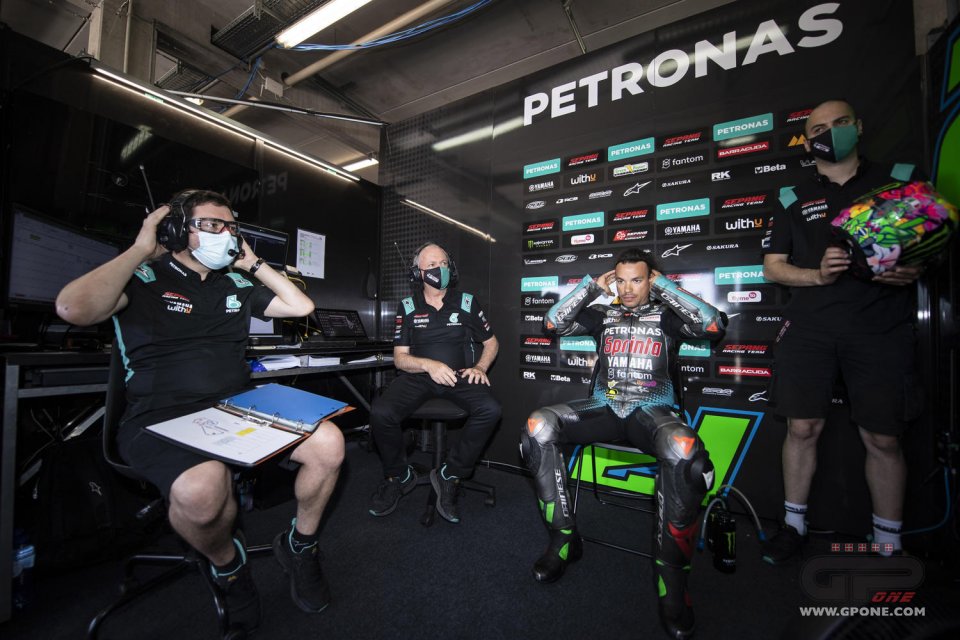 It was certainly not the Saturday that Franco Morbidelli had dreamt of. The Yamaha rider was not able to gain access into Q2 from free practice. In the last moments of Q1 he then crashed mortifying what seemed to be his best lap to go through to Q2 and fight for pole. Unfortunately, tomorrow Franco will start in 18th position and certainly the Sachsenring track is not the best one to try and make a comeback on.

There is at least some consolation of knowing that he has an excellent pace and therefore the potential to at least try to make an attacking race, in the hope that the tyres will last given the problem of excessive wear that seems to emerge over race distance. The scenario becomes even worse when you consider that the Sachsenring itself might have been the perfect track to offer Morbidelli a decent chance, given the lack of long straights that usually handicap his down-on-power M1. The problem is always the same, his rivals have continued with development while Morbidelli has a 2019 bike…

"In my opinion, this MotoGP is of the highest level ever - said Morbidelli - there are many young riders who are fast, the most experienced know how to sort out the bike and also know how to go very fast. There are a lot of manufacturers who are working well and they are able to be at the top by giving excellent packages to their riders. Even the regulations mean that the level is very high and that the balance is really precarious ".

But did you get something good from this Saturday?

"I am happy with the sensations I have on the bike, in FP4 I was also fast and consistent. The data we collected are interesting in my opinion. Tomorrow I start very far back and I think the chances of having a good race are practically zero. But I'll try, maybe with a good start and trying to make my pace as best I can and then see where that takes me. At least I didn't hurt myself in the crash, I just took a bad blow. "

What is not working?

"I feel good with the bike, but I'm always on the limit because I lose too much on the straight, on the descent and also on the main straight. I lose in almost all points of the track compared to Quartararo, who is the best Yamaha rider. I accumulate almost half of my gap in the straights and it is difficult for me to recover, indeed it is impossible. It is difficult to try to be faster than the best here, it was really difficult on this track. "

"I don't have the bike to overtake anyone in my opinion."

The other Yamaha riders are not really in a better shape, except for Quartararo. Have you compared your data with his?

"It’s almost impossible to compare my performances to those of the other Yamaha riders, the package is very different. I can look at some data, understand where I lose the most and maybe try to correct the trajectories to recover. But you never know how much room you have to improve, you do not know if you are already at the limit of your possibilities. I trust my feelings and they tell me that I am riding very well and that I feel very good on the bike. I can make it do more or less what I want, but it is not enough to be in really interesting positions ".

How do you explain this advantage of Fabio?

"I know Fabio very well and I know his riding style which is quite strange. He does things that are often different than all the others, whom I also know well. But I can’t comment any differently, except saying that he is particular".

How are you sorted for the tyres, it might be a bit of an endurance race…

"The race will be tough on the tyres. If I am alone, I will be able to keep a good pace and maybe have a good race. But if I am with the others, it will be a problem. The fact is that I always lose on the straight and I don’t recover when cornering. I'm in a group because the others actually block me. I can try to recover as much as I want, but it’s always like that. I'm often forced to slow down when cornering and then when I open the throttle I always lose ground. I don't have many options, it’s always like this. " .

Without the crash in Q1 and perhaps getting into Q2, how do you think you would have qualified?

"I was at the limit, I don't know how much I could have pushed harder in Q1. Maybe by using the hard, which was the right choice, I would have recovered something, but I'm not sure. Few times in my MotoGP career I have ridden so close to the limit ".